Your victory contributes to my good health: when Balbir Singh met Dhoni

His name was synonymous with hockey but Balbir Singh Sr was not immune to the charm of India's favourite sport — cricket. He once told former skipper Mahendra Singh Dhoni that "your victory contributes towards my good health".

The 95-year-old Singh, who won a three consecutive Olympics gold medals, died in Mohali on Monday.

The encounter with Dhoni happened four years ago when the Indian team was at the PCA stadium in Mohali ahead of their World T20 tie against Australia. Singh wanted to convey his good wishes to the team before the game.

Dhoni had thanked him and enquired about his health, to which the legend had smiled and replied, "Your victory contributes towards my good health."

Singh had told PTI, "I came to wish the team to win their third world title and complete their own golden hat-trick."

India defeated Australia to make the semifinals before going down to the West Indies in that edition of the World T20.

The hockey icon was battling multiple health issues and had been on life support for over two weeks.

Bowdon men and Leicester City women, who were both in with a chance of promotion to the Premier Division, are in discussions with England Hockey over the decision to conclude the 2019/20 men’s and women’s league season as it stood, The Hockey Paper can reveal.

With one game remaining, Bowdon and Leicester could have finished top of their respective divisions in the Investec Division One North and were the highest-profile clubs to be affected by England Hockey’s ratification last month.

In a battle of the top two, Bowdon men were due to play University of Durham on the final day. Meanwhile Leicester women were level on points with Swansea heading into their final fixtures with regulations stating the league is decided on games won over goal difference. As per the table upon the season being curtailed, university sides Durham and Swansea were promoted to the top flight, the latter becoming the first Welsh side to reach England’s top tier.

Both Bowdon and Leicester are seeking clarification from the national governing body to explain the outcome in the appeal process, centred upon the league not being fully completed, with Leicester, the six-time women’s champions, believing the league rules to be “very clear”.

“We are exploring our options still and we are discussing the matter with England Hockey,” said Sarah Treanor, Leicester City’s vice president development.

How the teams finished in the Investec Division One North men and women:

“We aren’t the only club in this unenviable position and I would say that we are extremely disappointed that the NGB applied regulations written for a fully completed season to determine the outcomes for teams whose seasons were not completed in these unprecedented times.”

THP contacted Bowdon to confirm their stance in the appeal process but the club declined to comment on the matter.

However England Hockey told THP: “On 28 April the board formally approved the reconciliation of the 2019-20 league season. We have since been in discussion with Bowdon and Leicester City and will hold further informal discussions in the next couple of weeks.”

England Hockey had outlined in its reconciliation statement that it was not a “straightforward situation for the league in unprecedented circumstances.”

It added: “England Hockey, whilst recognising that not all parties will agree with the rulings, believes it has followed a robust process to reach the most appropriate outcomes that means teams and leagues can start planning for a resumption of our great sport which we of course all hope will be later this year.”

Please help keep independent journalism alive in these uncertain times. With the media industry affected by advertising, we are continuing to offer our coverage free until we return in print.

Ahead of the new season, please subscribe in print or in digital format. Subscriptions for clubs, schools and individuals. 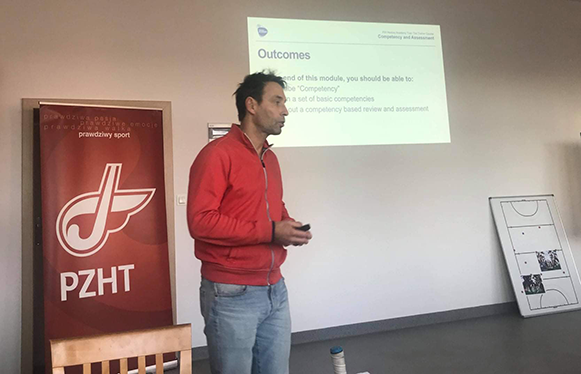 The FIH Academy works with continental federations and national associations across the globe to support development and education work among the hockey workforce that is so essential to the smooth and professional organisation and delivery of the sport.

In this article we focus on the work of two national associations – Poland and South Africa – that are working with the FIH Academy and other stakeholders to raise the level of hockey coaching and officiating in their respective countries. In both cases the national associations have had to adopt new methods of course delivery to meet the challenges presented by the global Covid-19 pandemic.

Hockey growth and development in Poland is continuing apace as the FIH Academy is working with the Poland Hockey Association to raise knowledge and experience among coaches, officials and administrators in the Eastern European country.

The education programme, which is an Olympic Solidarity Project, is led by FIH Academy Educator Michel Kinnen. The project manager, overseeing the delivery of the course is Mateusz Grochal, who currently coaches the Poland U16 boys team.

In line with the aims of the Olympic Solidarity Project, the Poland Hockey Association is seeking to develop its coaches, officials and administrators through a variety of activities and programmes. Grochal explains that the project, which is in its early stages, is using all the various technological solutions at its disposal. This includes a series of educational movies and clips on Poland Hockey’s Youtube channel and a venture using one of the most recent technological phenomena - online group meetings.

“We have conducted a Zoom conference for our umpires regarding the rules and interpretations,” he says, adding, “a few more are planned for the next few weeks. Obviously, there are no courses in place right now [due to Covid-19] but we are working on it - mostly on technical aspects.

“In addition, the Ministry of Sport is conducing a variety of seminars on Management in Sports and Coach Development, which are available for our members.”

For coaches, a series of webinars and workshops will provide coaches with access to hockey specific knowledge, up-to-date coaching concepts and coaching structures. In addition, much discussion will take place around ways of implementing certain principles on a training ground.

For officials, the Academy Educators course started in November 2019, but in a time when Covid-19 is impacting all activities, the course will now continue an online.

Meanwhile, over in South Africa, there is a heap of work being done to raise the level and accessibility to coach education. The South Africa Hockey Association’s (SAHA) Coaching Pathway and Offer is being redesigned. This is something the FIH Academy has been supporting since last year. Part of the process involves those involved in designing and delivering the courses observing FIH online courses and workshops to gain insight into how they are delivered.

Gary Dolley is the South Africa Hockey Association project manager and a member of the SAHA Coach Education Committee. His main responsibility is to oversee the initial stages of a country-wide growth strategy for hockey.

He puts the present situation in context: “In 2009/10 South Africa Hockey entered into a partnership with the KNHB (Dutch Hockey Association) to develop a coach education scheme for South Africa. We used the FIH coach education framework [ 2006] curriculum as the basis, using the Dutch expertise and material to construct our coaching scheme.

“The COVID-19 pandemic has forced the organisation to radically adapt to a ”new” normal, so we are reviewing our system. We are exploring online options – there are lots of innovations and some excellent material on the different digital platforms.”

Dolley adds that the course facilitators are currently being retrained to meet the needs of course participants. It is also important to note that SAHA was exploring online options well before Covid-19 appeared and hastened the development of digital courses.

Coaching in South Africa has been under review for some time, with coaches being trained to offer a more athlete-focused approach. The development of coaches is being led by a team of experienced practitioners. Since linking with the FIH Academy, the national association is able to observe a number of FIH Academy online courses and workshops, has received Level 1 materials and, in the future, an online workshop for South Africa’s coach educators will be hosted by the FIH Academy.

It is a collaboration that Dolley says will have a big impact: “Having the support and the official backing of the FIH Academy will give credibility to our coach education scheme. It will enhance our operations and increase the quality of our coaching workforce. Quality coaches will improve the general standard of play across our player pathway.”

For further information about the work of the FIH Academy visit: www.fih.academy

The former hockey star forays into new territories even as he turns 80.

Muneer Sait has eyes that laugh. They are also a window to his spirit filled with sunshine and happiness. And he spreads joy around him.

Take a walk to the M.A. Chidambaram Stadium at normal times — not the COVID-19 days — and you can see Sait, greeting friends, and lapping the arena in the evenings with the enthusiasm of a youngster.

His charm could so easily cut through barriers, build bridges, win hearts.

The illustrious Sait will turn 80 on Wednesday and, remarkably, he continues to be the centre-forward in hockey for Madras Cricket Club (MCC), plays squash regularly and takes out at least two days a week for golf.

“I want to keep fit, be on my feet and be happy till the very end,” Sait told Sportstar here on Tuesday.

Of course, he was a jadugar (magician) as a hockey goalkeeper when he travelled to the Mexico Olympics in 1968. “We could only win the bronze. This remains my biggest disappointment.”

The Indian team, with disastrous consequences, had two captains, Prithipal Singh and Gurbux Singh. “We had two camps in the team,” he recalled.

Sait’s finest moment arrived against Spain, when he stopped 12 penalty corners. “And we did not have face masks or chest pads those days.”

The eventual bronze was no consolation. He shone bright in domestic competitions such as the Rangaswamy Cup — “the trophy was donated by The Hindu” — and carried Tamil Nadu to two finals in the Nationals. In one of them, at Madurai, the side emerged joint winner.

His commitment to hockey enabled him travel to seven Olympic Games and six hockey World Cups as a FIH technical official.

Sait bonded with the legendary Balbir Singh (sr) as a youngster in Patiala, and in 1976, when he himself was a junior selector, submitted a report to Field Marshal Sam Manekshaw. “I wrote if hockey was not made compulsory in schools, it would die in the country.”

And the late Indian cricket team captain Ajit Wadekar — both worked for State Bank of India in Chennai — was a dear friend.

He was into polo too and represented the Madras Polo and Riders Club against Col. V.P. Singh’s formidable 61th Cavalry side. ‘We had very good players such as A.C. Muthiah,” Sait said.

The dynamic Sait also served as the Chief Judge at the Madras Race Club.

Interestingly, in his school days at Madrasa-I-Azam, Sait was a promising 110m hurdler.

“I was born with sports in my blood,” he says. Sait’s spellbinding journey continues.