Nobody has passion for hockey in my country, laments Pakistan coach Rehan Butt 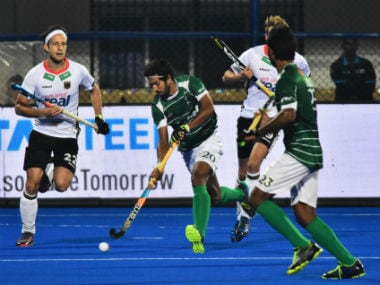 Pakistan players in action during their 1-0 loss to Germany at the Hockey World Cup in Bhubaneswar. AFP

New Delhi: Hurt by his team's winless campaign at the recently-concluded Hockey World Cup, Pakistan coach Rehan Butt has rued the systemic decline of the sport in his country, and called for structural reforms to restore Pakistan's lost glory on the turf.

"I am pained and saddened by the state of Pakistan hockey. Back home, nobody is passionate about the sport. Everyone follows just cricket, and unfortunately, even that doesn't happen on our soil. Everyone wants their kids to play cricket because there is money there. Unless international teams don't come to Pakistan, youngsters won't be inclined to play hockey. I am pretty sure that this World Cup must have inspired at least 10-12 youngsters in Bhubaneswar to play hockey for India. That's the effect hosting international matches can have at the local level," Butt said in an exclusive interaction with Firstpost.

Pakistan's domestic hockey is in doldrums, and the erstwhile powerhouses such as Punjab and Sindh Bank and Habib Bank do not offer jobs through sports quota anymore. Butt said that Pakistan can take a cue from India and look to provide financial security to its players.

"If, like India, Pakistan also start preparing kids at the ground level, offer them jobs and facilities, the situation may improve. I won't let my son play hockey, because there is no future in Pakistan. There are no jobs through sports quota," the former centre-forward said.

Pakistan were placed with Germany, Malaysia, and The Netherlands in what was christened as 'Pool of Death' at the World Cup. They advanced to crossovers after losing to Germany (1-0) and The Netherlands (5-1), while they played a 1-1 draw against Malaysia. In crossovers, they lost to eventual champions Belgium with a crushing 5-0 margin.

Butt, whose realistic expectation was to guide his team to the quarter-finals, pinned the blame for Pakistan's dismal show at the lack of grassroots talent.

"The main reason for our poor performance is that we are not getting talent from grassroots. We only have a pool of 24-25 boys, and we are forced to rotate them. Our current forwards don't have the ability of their predecessors. In the entire tournament, our forwards didn't score a single goal; what could be more pathetic? No coach and no management can do anything about it. We can make a gameplan, but the execution has to be done by the players," he said.

Further, the 38-year-old took a dig at Pakistan's chop-and-change approach to coaches, and admitted that such mindset makes him nervous.

"The volatility in Pakistan hockey makes me nervous. If, before going into a major tournament, you tell a coach that if a certain result is not achieved, you'll be fired, I don't think any coach will be able to give his 100 percent. Also, the players won't give much heed to a coach under such circumstances, because they know that it's the coach who is going to get an axe while their places are secure.

"Winning and losing are part of the game, but to put the blame of losses entirely on coaches is not done. I would not defend the loss, but I think our federations should give the power to coaches to act after such results. They should be given time to understand their shortcomings and work on them within a timeframe. If, after that timeframe, the results are still not there, that particular coach must leave on his own. If you keep changing coaches and management after every failure, the coach wouldn't have time to implement his ideas," he said.

Butt added that a more patient approach with coaches also rules out complacency among players, who, otherwise, are loath to adapt to a coach's philosophy.

"The tendency among players in India and Pakistan is that they know their places are secure, and the action will be taken on coaches only. If they are told that coaches are here to stay and they have to develop their game to retain their places, their game will improve.

"Spain didn't qualify for crossovers, but you will find the same coach in the Pro League giving better results. Why? Because he will analyse his performance and come back stronger. You need to give time to coaches."

Pakistan hockey's immediate target, Butt said, is the Pro League that begins on 19 January. The six-month competition will also serve as an Olympic qualifier, and the coach said his team's focus would be to seal their berth for the 2020 Tokyo Games.

Nicci Daly: From a World Cup final to shaking on the start line 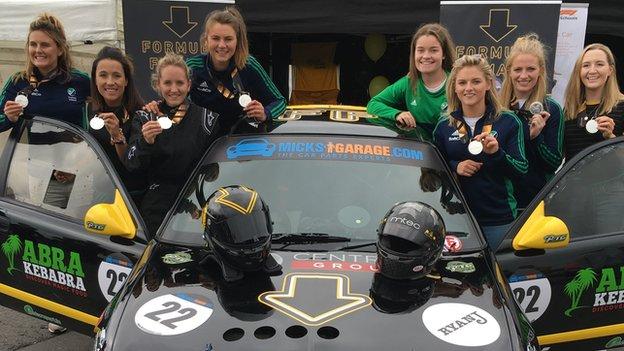 Nicci Daly's speed and skill was a feature of Ireland's fairytale Hockey World Cup campaign but she's now using those same traits in a very different sporting arena - the racetrack.

Daly, 30, starred for the Irish women's team as they thrilled their way to a silver medal in London, which has boosted the sport's popularity in Ireland but she also hopes to encourage more women to get involved in her other passion.

Hockey may have provided her with a sporting career, team-mates and glory but the roar of the engines and the buzz of the pit lane will always have a hold on the Dubliner, who is steeped in Irish motorsport.

As a little girl, she watched from the paddock at Mondello Park where her late father Vivion raced domestically for over 20 years, and her uncle Derek competed in Formula One in the 1970s and 80s.

'The sound, the smells and the adrenaline' 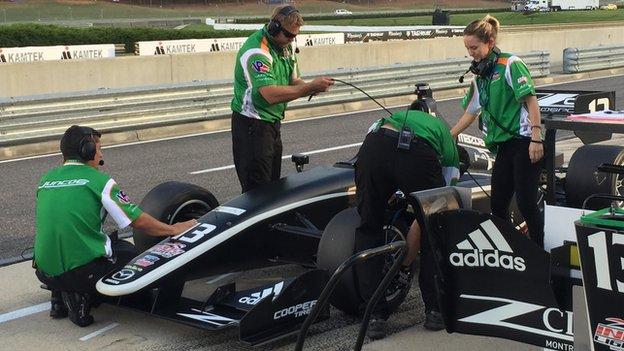 Away from the hockey pitch, Daly works for Juncos Racing in IndyCar in the USA

Vivion passed away from cancer in 2002 but he left a lasting impact on his daughter, who found a way to remain involved in racing with a Masters degree in Motorsport Engineering from Cranfield University.

Now a data engineer for IndyCar team Juncos Racing - a series her cousin Conor races in - Daly splits her time between Ireland and the USA.

"It's a really exciting environment to be involved in and you never know what is going to happen," she said.

"I think it's the sound, the smells and the adrenaline rush. Even though I haven't really raced a whole lot, I just love watching the cars and seeing what goes on behind the wheel.

"I remember first getting into a racing car the levels of concentration required didn't really compare to hockey. You can't switch off for a moment because you're going round corners at speeds that don't allow any mistakes to happen."

"Recently I got to do a race myself. Ever since my dad passed away 16 years ago it's something I wanted to do for myself and for him.

"This year I decided I would raise money for charity and do a race in his honour, so I formed the Formula Female racing team.

"Myself and my friend Emma Dempsey got together and we did a lot better than people maybe expected for the first time in a car. Now we have the bug and want to keep doing it."

Daly has found the perfect foil in Dempsey, who also boasts a strong motorsport background, and the duo's first race together was at the Mondello Historic Festival in August with a Rover 25 Gti.

"It was nerve-wracking being on the starting grid," Daly recalled, "My foot was on the clutch literally shaking. I had no experience, no expectation and I didn't know what was going happen.

"I didn't want to do badly and wanted to do as well as I could, so sitting on the starting gird was more nerve-wracking than the World Cup final.

"Obviously I would have loved to be a Formula One driver or an IndyCar driver but I think I'm a little bit too old for that now!"

Inspiring the next generation 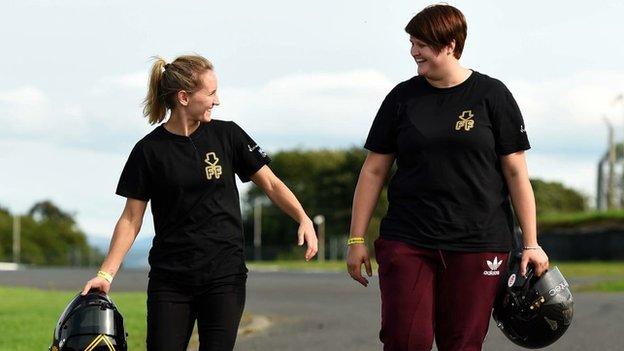 Formula Female began as a way to help Daly take her first steps in racing but she hopes to expand the team next year and inspire a new generation of female drivers: "Ultimately I want hope to see women in motorsport grow and that one day we see more girls taking it to the boys in Formula One.

"I've already got a little girl called Holly she's only seven and a go-karter and she's the only girl in her class and she's going to be a brand ambassador for us next year and we are going to support her and give her a bit of exposure to the rest of the motorsport world.

"We're going to have a two-car team entered in a championship in Mondello. It is exciting and I'm looking forward to continuing to build on it and hopefully get a few more girls involved." 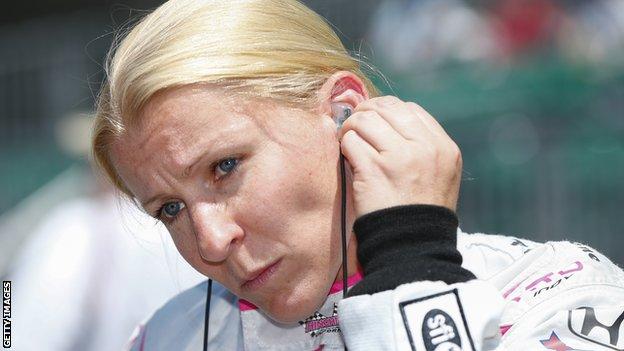 IndyCar racer Pippa Mann has been critical of the W Series, saying it will "segregate" female racers and be a "sad day for motorsport"

Female participation in motorsport is growing, as is seen through the introduction of the W Series, a single-seater formula only for women, which has received a hefty chunk of negative press from several high-profile female drivers.

"There has been a lot of mixed emotions about the W Series and I don't think it is a negative," added Daly,

"I'm not saying a women-only series is the best way forward, but I do think women can compete with men in Formula One and in IndyCar but in order for that to happen we want the best women competing against the best men.

"There are only a certain amount of spots available at the highest level of the sport, it's not like the professional teams you have in soccer where there's a lot more positions.

"In order to give females the best chance you want to grow the competition. I hope it does bring more females into the sport and we do see an increase over the next couple of years and we see some of them in Formula One soon."

The best Christmas present ever 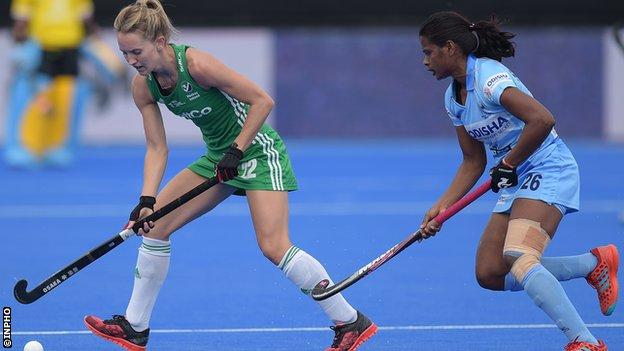 Daly won her first Ireland cap against Belgium in 2010, representing the 'Green Army' 169 occasions since

Formula Female is more than a side project for Daly but for now hockey remains the priority and she acknowledges that their World Cup success will really be measured by the long-term impact it has at home.

There are signs of progress, with increased funding from the Irish Government and the creation of a new FIH-approved pitch in Dublin, which Daly describes as the "best Christmas present ever."

"We did everything on a shoestring budget and it was part of our core values that we wouldn't let anything get in our way. A home pitch is what we need if we are going to kick on.

"We would like a bit more funding and backing and keep this eighth position in the world rankings and we don't go backwards and keep on building. More support for the players as well because trying to juggle life and sport can be difficult and demanding. 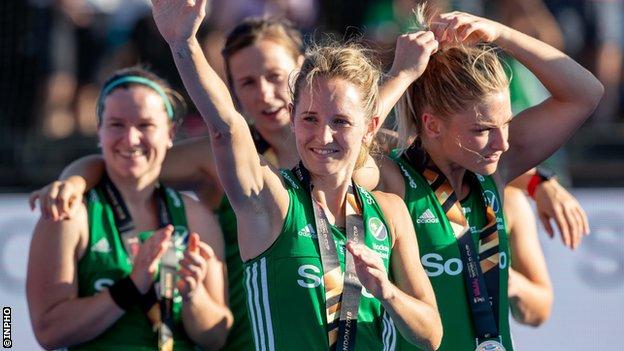 "When you think about the extent of what we achieved it is still hard to believe. It's nice to be able to look back and smile and enjoy the little moments that made it so great. I've had a bit of a break and now I'm ready to go for Olympic qualification.

"I thought getting to a major tournament was the real goal, whether that be the World Cup or Olympics. It was beyond my dreams reaching the final, looking back we realise how special it was.

"I think going forward the Olympics will take precedence and I hope to do a bit of work as an engineer flying in and out for races next year, that's the plan going forward and hopefully I can continue to balance both going forward."