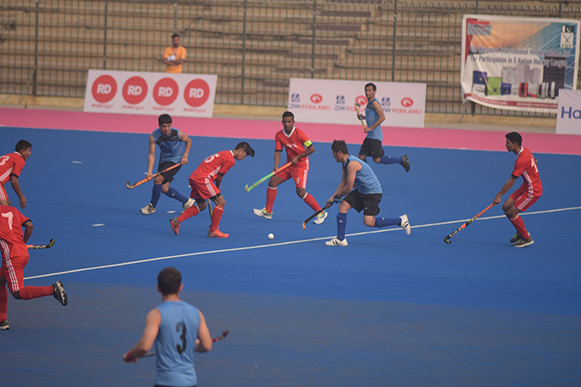 It was a hugely successful four days of hockey for Uzbekistan men’s hockey team as they stormed to an unbeaten first place at the Haier Hockey Series Open in Lahore, Pakistan.

Uzbekistan, who were the highest ranked team at the competition at 55 in the FIH Hero World rankings, got off to the best of starts with an 11-0 win over unranked Afghanistan. There were two hat trick heroes as captain Golib Kalandarov and Karimov Ruslan both found the goal three times apiece.

Kazakhstan were always going to be Uzbekistan’s closest rivals, and so it proved as they tore to a 6-0 win over Nepal. Four goals were scored by Yermek Tashkeyev, including a penalty stroke that he slotted coolly past Kishor Ojha in the Nepalese goal.

The winning ways continued for Kazakhstan as they put a further eight goals past Afghanistan, with Aman Yelubayev hitting three – all impressively taken goals scored from open play.

While both Nepal and Afghanistan have limited international experience, it was Nepal who adapted better to the pressure. They scored against Uzbekistan, although they lost the match 6-1 and then they bounced back to defeat Afghanistan 4-0.

The crunch game was the final game of the competition. Uzbekistan and Afghanistan both went into the match with unbeaten records and, while the higher-ranked team had the better goal difference, a win for Kazakhstan would have been enough to send them through to the next round.

It was actually Kazakhstan who took the lead, with Nurbol Kozhym scoring in the 18th minute. This lead was wiped out just seconds after the restart when Khakimby Khakimov struck home from a penalty corner. The two sides battled it out for the remainder of the half, but a goal three minutes from the half-time whistle from Ruslan settled Uzbekistan nerves a little.

The Uzbekistan lead was extended to 4-1 through Ruslan and Gaybullo Khaytboev. Although Kazakhstan pulled one back through Tilek Uzbek, it was always going to be an uphill struggle for Kazakhstan to get back on terms. Two goals from Oybek Nazarov sealed the win and Uzbekistan’s progress to the next round was confirmed.

Top scorer in Lahore was Karimov Ruslan of Uzbekistan with seven goals, with Kazakhstan’s Yermek Tashkeyev in second place with five.

The 2 Test series is drawn with two draws

“The coach has done well. Definitely there has been a development in the standards of coaching.” 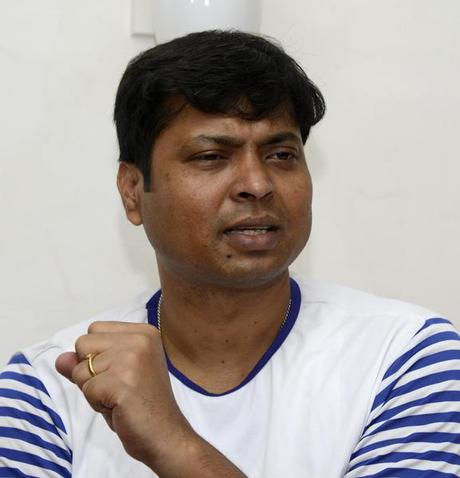 In the absence of Rupinder Pal Singh, India had three dragflickers in young Harmanpreet, Amit Rohidas and Varun Kumar but their conversion rate was poor, recording just 30.7 per cent.

India failed to convert three of the five penalty corners they got in their 5-0 mauling of South Africa in their World Cup opener in Bhubaneswar last month.

“We need to have world class flickers. We presently have Harmanpreet, Amit Rohidas and Varun. We have to pay focus on them. We have to have a 60-70 per cent conversion rates in important matches,” Tirkey said on the sidelines of the Beighton Cup hockey tournament here.

Having topped their pool featuring eventual champions Belgium, the hosts made a quarterfinal exit, going down to the Netherlands 1-2 in the World Cup.

Tirkey said the youngsters failed to live up to the expectations against the Netherlands as they missed a golden chance to win the World Cup.

“I feel our youngsters could not play as per their standards. Otherwise team’s performance was very good. There was some good tackling. It’s bad luck that we could not live up to the expectations in the quarter-final. Overall it was a good show. I feel we missed the World Cup,” he said.

“After a long time, we saw development in Indian hockey team. With a lot of talented youngsters, we looked fit. We drew with Belgium in the league stages,” he said referring to their 2-2 draw against the champions.

“Harendra Singh is doing extremely well with team. We lost to Australia in the shoot-out (in the Champions Trophy). It was an impressive show (at the World Cup).

“The coach has done well. Definitely there has been a development in the standards of coaching.”

“It was a grand success. Stars of every field be it in sport or glamour world were involved in making of the tournament. It’s time that everyone including the corporate sector to come forward and support hockey,” he concluded.

‘Pakistan hockey has not adapted to modern techniques’ 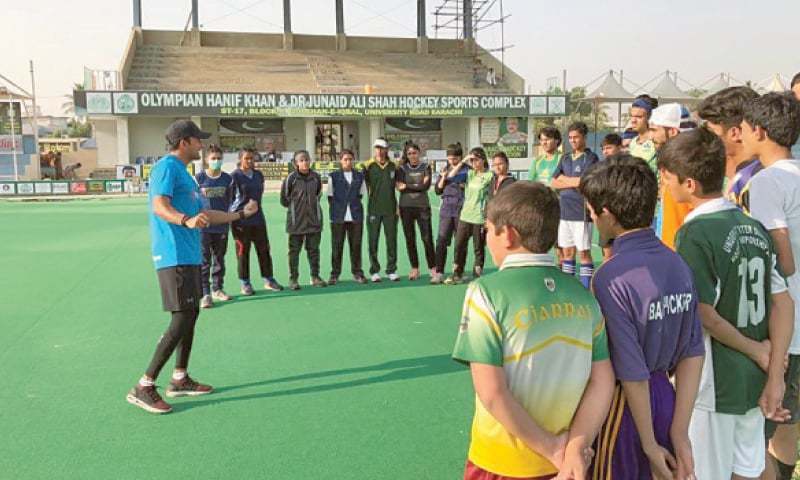 KARACHI: Adnan Zakir, an ex-international hockey player and FIH qualified coach, has attributed the country’s falling standard of the game to “lack of development programme”.

“[World] hockey had changed long ago; however, we haven’t fully adapted to modern techniques, and have been following the old style of play,” Adnan, who had played 169 international matches for Pakistan from 2001 to 2006, told Dawn on Sunday.

The England-based Adnan who is here on holidays is imparting basic skills to young boys and girls at a hurriedly arranged four-day clinic by the Karachi Hockey Association (KHA) at its complex. The camp concludes on Monday evening.

Sponsored by England Hockey Board, Adnan passed level I, II and III coaching courses between 2008 and 2010 and later taught the game for three hours a week. He now serves as head coach of Old Loughtnion Hockey Club and director coaching of New Market Hockey Club.

The former utility forward who played as inside right and right winger at the 2006 World Cup in Germany, three Champions Trophy events, an Asia Cup besides Azlan Shah and other events, said he had no answer when English players questioned about Pakistan’s decline in hockey.

“In my opinion, Pakistani players have been sandwiched by European and Asia styles [of hockey] that has hampered their progress,” rec­koned Adnan, who remained a member of the FIH youth panel from 2004 to 2006.

In this connection, he cited his own example when he was picked by Roelant Oltmans during his first coaching stint in Pakistan in 2004 and adept his techniques but was shown the door after his departure by his successor for not complying with ‘his’ instructions.

“Playing hockey and coaching are two different things altogether; and full time jobs and a good player can’t be a good coach,” he noted.

According to Adnan, Pakistan contains heaps of hockey talent rich but the players don’t know the basics of the game, and “therefore the national team needs a professional coach”. He said he was happy to see the game’s revival in the metropolis under the KHA at their own premises.

Adnan now plans to travel to Lahore, Gojra, Faisalabad and Sheikhupura to deliver lectures there.

ISLAMABAD - The government has provided a sum of over Rs425 million to Pakistan Hockey Federation (PHF) during the last five years for promotion of hockey as the national game of the country.

“PHF is the premier entity for selection, training and coaching of hockey players and as well as to represent Pakistan internationally,” an official of Inter Provincial Coordination Ministry told APP.

He said the federal government was committed to promoting the national game and providing annual as well as special grants in financial allocations as per budgetary resources.

The official said additionally, PHF generates its own funds from sponsorship and grants in aid from other sources as well.

To a query, he said the government provides regular annual grants, special and supplementary financial grants to the National Sports Federations to promote sports in the country at the grassroots level.

He said the government was also committed to the well-being of the national sports heroes as they are pride for the county. He said as a welfare step of former sports veterans, Pakistan Sports Board has been paying stipend of Rs 5,000 per month to the sportspersons and beneficiaries regularly.

KUALA LUMPUR: Universiti Kuala Lumpur (UniKL) are out to be the new dominant force in next year’s Malaysia Hockey League (MHL).

UniKL also have another national midfielder Mohd Marhan Mohd Jalil, who has been their skipper since last year.

Kemperman and Verga were members of the Holland team that finished runners-up in the World Cup.

The 31-year-old Sukri, who has been featuring in the MHL since 2004, said that he joined UniKL because of coach A. Arulselvaraj.

“I like coach Arul’s training method and I’ve trained under him when he was the national assistant coach to chief coach Paul Revington (of South Africa) in 2012.

“Arul has done well to improve the UniKL team in the last few years and they did well to win the overall Cup this year,” said Sukri.

“We have a number of good foreign and local players and believe that we have a team that is good in every department to challenge for silverware.

“We also have Razie, who is a good drag flicker and he was the top scorer in the MHL twice,” added Sukri, who made his debut in the MHL for Bank Simpanan Nasional (BSN) in 2004 before joining Ernst and Young in 2006.

UniKL face Terengganu in the Charity Shield match on Jan 11.

Seven teams will feature in the Premier Division and the other teams in the fray are Terengganu, Tenaga Nasional, Maybank, Nur Insafi, TNB-Thunderbolt and Universiti Teknologi Mara (UiTM).

Gormley’s incredible career to be celebrated on January 5

One of Ireland’s greatest players of all time is to play one last game in the green jersey with Ronan Gormley’s career set to be celebrated on January 5.

A special match between an Ireland select team and a Pembroke selection will take place at Serpentine Avenue at 3pm on the day, offering a great occasion for the Irish hockey public to pay tribute to a true great.

He retired from international hockey earlier this year following 13 years in the Irish setup earlier in 2018 having played 256 times for Ireland, captaining the side 121 times.

Gormley was part of the first Irish team to medal at the European Championships in 2015 as well as playing at the Rio Olympics in 2016 among many highlights.

For the celebration, an array of Gormley’s teammates from throughout his playing career will turn out for one last time and all are welcome for what promises to be a fitting send.

The list includes players from All-Ireland winning days at Pembroke and history-making days with the Green Machine as well as his illustrious club career on the continent which saw him win an EHL silver medal with Madrid’s Club de Campo.

The game will involve both current and past Irish internationals who are all looking forward to a fun yet competitive day out.

Conor Harte commented: “I’m delighted to be able to celebrate the career of one of the driving forces behind the success of the Irish team over the last few years.

“Ronan was an example to all of us and we would love if as many people as possible turned out to celebrate his dedication and commitment to the Irish team.”

The game will be played at 3pm on January 5 at Pembroke Wanderers, Serpentine Avenue and all are welcome.

The organisers are encouraging kids to bring sticks as they will be welcome on the pitch at half-time and face painting and a bouncy castle will make this a great family occasion.