All the news for Monday 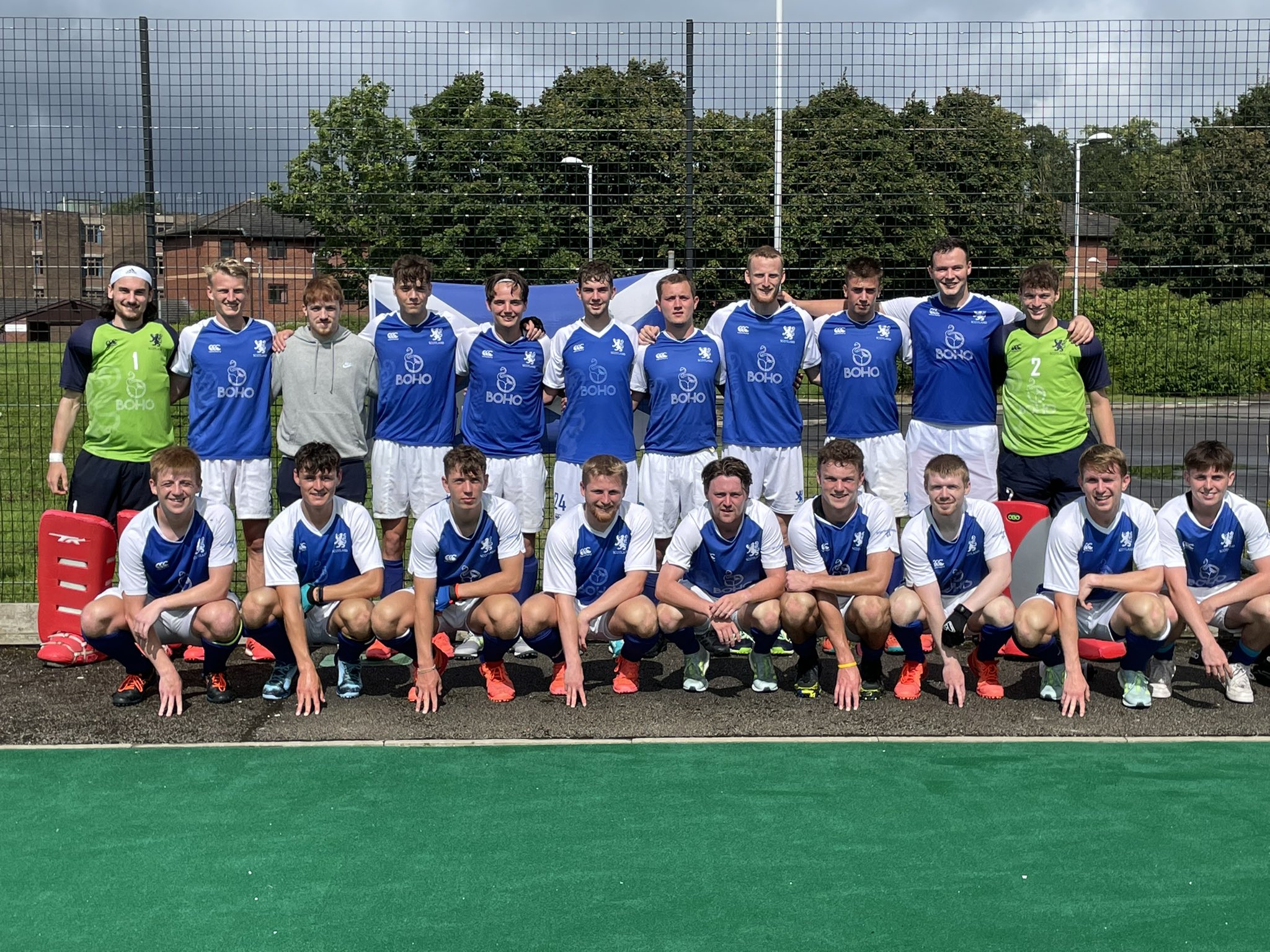 It was three wins from three for Scotland U23 men against Wales in Wrexham as they won the final contest 3-1, to round off a fantastic test series.

Scotland made a decent start to the game and took the lead in the opening quarter. The Scots defended a Welsh corner then sprung a counter attack which was finished neatly by Joe Waterston to make it 1-0.

It went to 2-0 in the second quarter through a lovely flick by Fraser Moran at a corner, giving the visitors a comfortable lead.

The game became scrappy and littered by cards which saw it lack any great momentum.

Despite this Scotland furthered their advantage in the final quarter. A penalty corner hit a player on the line and gave Andrew Webb the chance to score from the penalty spot – he made no mistake, 3-0.

Almost immediately Wales pulled one back. The home side had a penalty corner break down but a player came round the back and struck the ball superbly into the net for 3-1.

Head Coach Graham Moodie said, “Both sides were tired today, it’s difficult to play three games in three days, but I’m really pleased to finish the series on a win. We won all three games, which is fantastic, and we won them all in different ways. Today was a little scrappy but we still got the job done.

“It was great to integrate more players into the squad and there’s a really positive feel over these matches, which is great.” 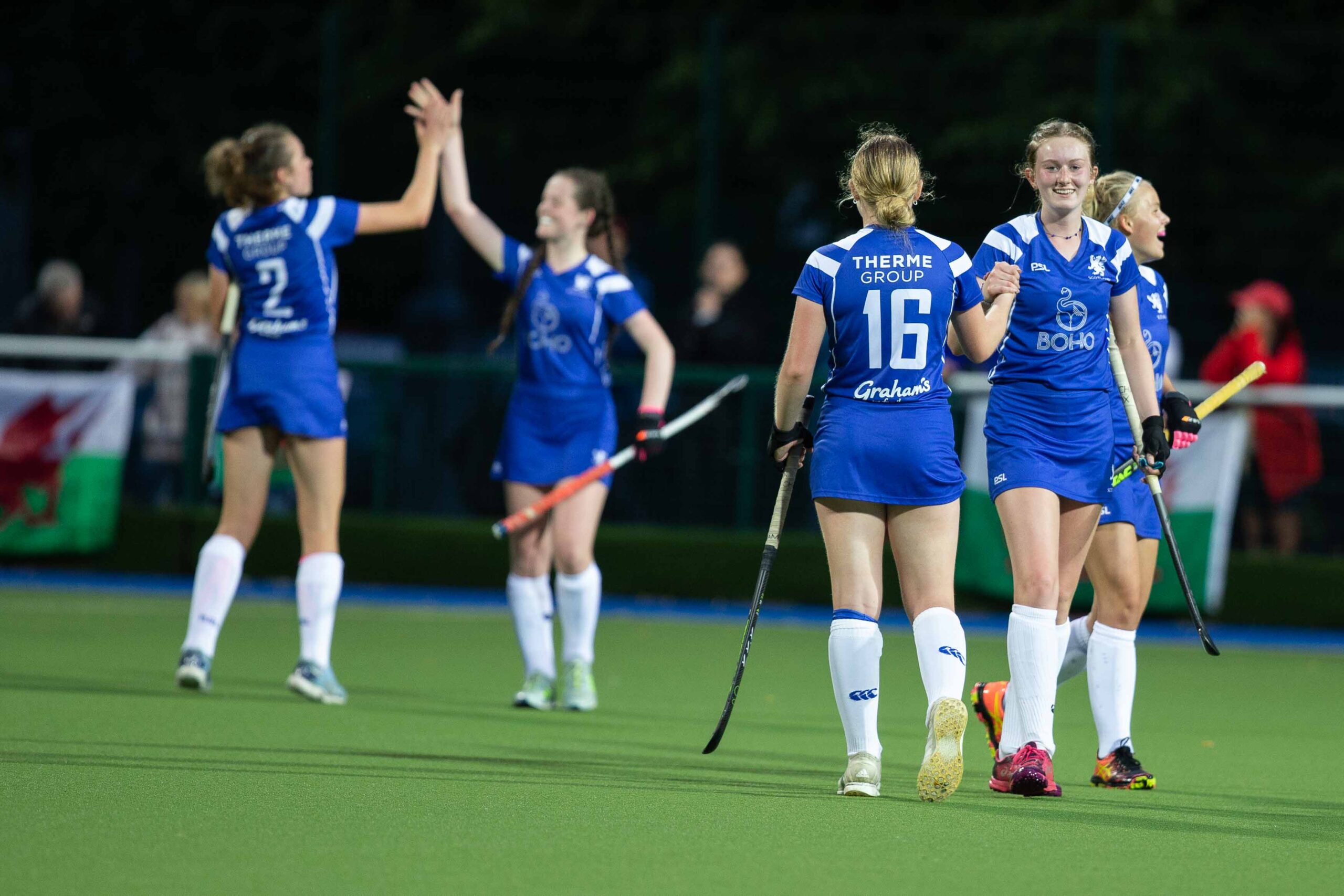 In an excellent performance Scotland Emerging Girls won the final match of their three-game series against Wales 4-2 at the Glasgow National Hockey Centre.

Scotland opened the scoring. The ball was carried into the D and finished sweetly into the bottom right corner by Emily McLean to make it 1-0.

The Scots were flying. Alex Bayne drove along the baseline, looked to pass, but instead fired her shot on the reverse into the net.

Wales pulled it back to 3-1 with a penalty flick but the Scots restored their lead from a penalty corner routine; the first strike at goal was saved but the second strike smashed into the net by Darcy Littlefield.

A late Wales strike made a final score of 4-2 and a solid win for the Scots.

Scotland Emerging Boys lost the final game of a three-match series against Wales 3-2 at the Glasgow National Hockey Centre. Despite the result the Scots won the series 2-1 in what was an excellent competitive weekend of international youth hockey.

Scotland started the game a little flat and it allowed Wales to capitalise and burst into a two-goal lead.

Murray Banks pulled one back for Scotland just before half time with a great solo goal. He took the ball on a run and beat five players before striking the ball into the bottom corner on the reverse. 2-1.

The Scots equalised in the second half at a short corner when Henry Porter lifted the ball over the keeper on the rebound. 2-2.

Wales went 3-2 ahead and despite a late surge, which included a missed penalty corner at the death, it was Wales who held on for the victory.

Wahid scored the opener for Wapda with Arslan making it 1-1 in the third quarter. Wahid again struck in the fourth quarter to take the game away from Army.

Answering  a caller while taking public telephone calls on 01 August, the PM agreed that Pakistan hockey`s constant decline is deplorable, and he especially regretted Pakistan`s non qualification for the Tokyo Olympics. PM also confessed that due to his attention focused mainly on the economic challenges confronting the country, he couldn`t give time to sports especially hockey and squash which brought so many laurels to Pakistan in the past. But now he would take some concrete steps to resurrect hockey.

He commented,`good to know that the PM showed concern for the national game.

Foremost requirement is immediate removal of the President and the Secretary Pakistan Hockey Federation.They have totally failed.

During the tenure of PHF President Khalid Sajjad Khokhar, Pakistan hockey has seen one disaster after another: ranking has slid to 18th, worst position (12th) at the 2018 World Cup, non-qualification for the Tokyo Olympics.

In its report, the sub-committee had recommended the immediate removal of PHF`s President and the Secretary General.`

Answering a question who should replace the President and the Secretary of the PHF, Rasheedul Hassan said, ``I cant name anyone. There are capable people. The PM, as the Patron in Chief of the PHF, has the authority to dismiss the incumbents and appoint suitable persons who can take appropriate decisions to put the national game back on the track.``

About how long will it take Pakistan to climb back, the great right half of his time gave the example of India, `they had failed to qualify for the 2008 Olympics and could finish only last 12th at the 2012 Olympics. By bringing suitable people at the top,the Indian hockey has constantly improved and they are now on the Olympic podium.`

When asked if he concurs with the Prime Minister that the introduction of the synthetic turf is one of the reasons for the decline in Pakistan`s performance,  Rahseedul Hassan didn`t agree, `Pakistan won a number of tournaments on the synthetic turf including the Olympics in 1984 and the World Cup in 1994.`

Regarding the lack of interest in hockey among the youth, he opined `with the national team  performing pathetically all this time and not even featuring at the last two Olympics, it is no surprise to see people`s following of hockey diminishing.`

He thanked the Lahore Press Club for organising a very good presser.

In his concluding remarks, Rasheedul Hassan said,`the whole nation is now waiting for some decisive action from the Prime Minister as promised by him on the first of this month`.

A Gulf-based Indian businessman has announced Rs 1 crore (US$684 043) cash award to goalkeeper P R Sreejesh, one of the stars of the Indian men's hockey team's historic win A Gulf-based Indian businessman on Monday announced Rs 1 crore cash award to hockey goalkeeper P R Sreejesh who emerged as one of the stars of the Indian men's hockey team's historic bronze medal in the Tokyo Olympics.

Vandana Katariya has been appointed as the ambassador of Uttarakhand's Women Empowerment and Child Development Department. The Indian women's hockey team striker, Vandana Katariya, has been appointed as the ambassador of Uttarakhand's Women Empowerment and Child Development Department.

India had bagged 14 penalty corners against Ireland and failed to convert even one and the team's think-tank raised the issue in the team meeting.

MUMBAI: A look at the video recordings of her drag flicks in the matches against Ireland and South Africa in Tokyo and going back to the drawing board with the coaches helped Gurjit Kaur, the lone drag-flicker in the Indian women's hockey team, to make a stunning comeback and score the all-important goal against Australia in the quarterfinals.

India had bagged 14 penalty corners against Ireland and failed to convert even one and the team's think-tank raised the issue in the team meeting.

"We discussed the issue in the team meeting. Lot of people don't understand that Ireland had a very good first rusher and an experienced goalkeeper. Also, there are days when things just don't work for you. It was such a day for against Ireland as not a single attempted worked," Gurjit said during a virtual press conference on Saturday.

"I also had a look at the videos of my drag flicks and correcting some mistakes that I was making," Gurjit added.

The coaching staff also impressed on the drag flicker that she might be choosing the wrong spot for her drag flick. They also discussed about the angles that she can work to avoid the first rusher.

So, Gurjit went into the match against Australia more determined. However, she did not take the first PC India earned and they tried a variation. But just before the second, the coaches sent a message and Gurjit stepped up and slammed home the winner.

Gurjit said she did not change much in her approach but made minor tweaks and once she scored against Australia, she was more confident and continued with the same rhythm.

Sjoerd Marijne, chief coach of the Indian women's team, said the success of the penalty corner depended a lot on the choices that were made by the players -- like what variation to use, who will stop the ball and where the flicker will place the ball.

"She was not making the right choice in the preliminary round games but in the knockouts, she really did a good job and scored the winener against Australia in the quarterfinal," Marijne said after the bronze medal match that India lost to Great Britain 4-3 and in which Gurjit scored a brace of goals through well-placed drag flicks.

Gurjit, who picked up drag flicking from Dutch drag flick coach Toon Siepman in 2017, was philosophical about the match against Ireland.

"Everybody has his or her day -- on some days things work just fine some days nothing does. Against Ireland, we got 14 penalty corners and I was trying my flicks but it so happened that nothing worked on that day. I saw the video recording later and realised what was missing in my routine and I improved on that in the knockout stage," said Gurjit.

Having cemented her place in the team, Gurjit now wants to continue to work hard and do her best in the matches.

"The bronze medal match showed what we are actually capable of. We were down 2-0 and came back strongly and were a goal up too. The team played as a single unit and showed good fighting spirit. We need to maintain this. it is a big achievement for the team and it will inspire the next generation of women hockey players," said the 25-year-old from Punjab.

“On behalf of the Australian hockey community, I congratulate Andrew and Rachael on their appointments to this important commission,” said interim Hockey Australia CEO Michael Johnston.

“Following their performances in Tokyo, they are now both dual Olympians and I am sure, together with the other new members, will make a valuable and positive contribution.”

The role of the Athletes’ Commission is to advise the AOC Executive on all matters relating to the Olympic Movement from an athlete’s perspective.

“The new Commission will steer their own course. I am sure they will find areas of importance to them and really focus their energy and effort on achieving those things,” outgoing Athletes’ Commission Steve Hooker said.

Kookaburras great Jamie Dwyer, who was on the Commission, did not seek re-election.

More information and the full story of the AOC Athletes’ Commission election results.

Sportplan are bringing you 30 sessions of skills and conditioning for you to send to your players to do at home so they are ready for the 2021 season! Access your complete pre-season programme completely FREE by signing up or logging into Sportplan! We are also giving you the chance to win a Y1 Sport bundle for yourself or a Veo Camera for your club!