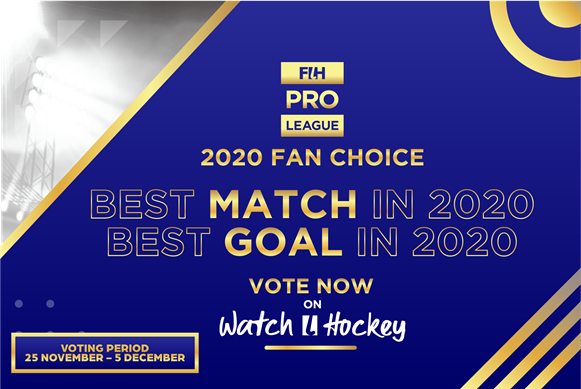 As we approach the end of what has been a challenging year for everyone, we wanted to take the opportunity to look back on some of the highlights from a disrupted but still exhilarating FIH Hockey Pro League in 2020.

We have established a shortlist featuring the best fixtures and goals from the competition, covering the matches that took place between January and March as well as the games that took place when the FIH Hockey Pro League returned between September and November. Now we need you to tell us which ones are the best!

You can vote for your favourite matches and goals in the Live & Upcoming section of the Watch.Hockey App, which can be downloaded for free on Apple and Android devices. The goals and highlights clips are available on Watch.Hockey, with complete matches also being available in most countries, subject to geoblocking.

The voting process will close on Saturday 5 December.

The shortlists for the best matches and goals can be found below.

Vote for your favourite match from the ten shortlisted below:

This shortlist was compiled using the goals selected for the FIH Hockey Pro League Goals of the Week, which were issued on FIH social media channels whilst the competition was active.

Vote for your favourite goal from the ten shortlisted below:

The camp which began in August at the SAI Bengaluru Centre, was earlier scheduled to conclude on December 18.

The Indian men's hockey team has been training at the SAI Bengaluru Centre since August this year, as sports began to resume in a phased manner following the withdrawal of the nationwide lockdown imposed in March to contain the COVID-19 pandemic.   -  TWITTER

The Indian hockey team's ongoing national camp, which is currently underway at the SAI centre here, will conclude a week earlier on December 12 on the recommendation of chief coach Graham Reid.

The camp, which has been going on for four months, was earlier scheduled to conclude on December 18.

The players will reassemble for camp again on January 5 after a three-week break.

"A comprehensive strength and conditioning program will be given to the athletes by the chief coach and scientific advisor (Robin Arkell) of the men's senior team to complete during the break," the Sports Authority of India (SAI) said in a statement.

The Indian men's hockey team has been training at the SAI Bengaluru Centre since August this year, as sports began to resume in a phased manner following the withdrawal of the nationwide lockdown imposed in March to contain the COVID-19 pandemic.

But the camp ran into rough weather in August this year after half a dozen players tested positive for coronavirus upon their return after a month-long break.

Susannah Townsend: "It Allowed Us To Show Our Vulnerabilities"

There can be no denying it; the last eight months have been a huge learning experience for everyone, no matter who they are. This includes international athletes.

From training and seeing each other nearly every day to having to spend weeks on end stuck at home, the almost overnight upheaval of their daily routine was something none of them had ever been through before.

But for Hollie Pearne-Webb and Susannah Townsend, the absence has also brought about an even greater sense of unity and closeness amongst the women’s team.

As a squad, they particularly focussed on the mental wellbeing of the group during the first lockdown, making sure they were regularly asking each other how they were and not shying away if they were finding things difficult.

This has allowed them to develop an even greater understanding of each other, being able to find out what makes both themselves and their team-mates excel and what can also hold them back.

Speaking about this on a special episode of #InsideTheCircle recorded for Hockey’s In-Haus Weekend, Townsend said: “We based a lot of our meetings on the mental aspect of things and the struggles that some people had. But also to counteract that some people were flying and really enjoying the time away. Every person was different and we had meetings every week called ‘Keeping Connected’.

“I think everyone looked forward to them, being able to catch up and asking ‘how are you?’ which people in the world don’t ask enough anyway. It also allowed us to show our vulnerabilities.

“If you’re struggling in that environment – which everyone did at times – and you’re open about it then others can help you. There’s no hiding behind the camera because you have to answer the question.

“We’ve continued having those conversations more and more since we’ve come back and that’s something we’ve learned; keep checking in and making sure mentally we’re all in as good a place as we are physically.”

This is something both players believe will only aid their quest to secure an Olympic medal at a third straight Games for the women’s team in Tokyo next summer.

After a difficult 2019, both Pearne-Webb and Townsend recalled feeling very positive about the direction the squad was heading in after their FIH Hockey Pro League games against Australia and New Zealand earlier this year.

And even though the current pandemic could have threatened to halt that progress, they believe having another year to prepare for the Games will only make them stronger.

“Everyone started to feel that collective buzz around the team that we were going somewhere. So we were slightly frustrated that that had to stop.

“But at the same time, because we are a young squad in terms of the amount of time we’ve spent together as this group and with Mark coming in, that extra year for our squad will be a benefit to us. I’m really looking forward to this extra 12 months to see where we can go.”

Townsend added: “It's about a feeling within a squad and both Hollie and I have felt it before in previous cycles and we had a similar feeling in January.

“It’s really hard to describe but everyone felt it. It’s something that you almost don’t talk about because you just know it’s right.

“With the initial disappointment it was tough for everyone, especially for us oldies who had to figure out how we’d get through another year, but having said that it will give us a better chance of coming home with the gold medal.”

Yvonne O'Byrne: Hockey should be a supportive community where players and clubs feel like they can voice concerns and actually be heard.

IN a surprise move yesterday Hockey Ireland imposed in full the suspended sanctions they had handed out to three Cork hockey clubs a number of weeks ago.

At various stages Church of Ireland, UCC and Harlequins women's side said they were not fulfilling EY Irish Hockey League fixtures due to concerns at having to travel to Dublin when they were at higher restrictions than the rest of the country.

Harlequins have been handed 5-0 defeats for two EY IHL matches they did not fulfill following an appeal by Muckross Hockey Club against the suspension of the sanctions.

They did not to travel to away games on September 26 against Muckross in Dublin and then again on October 10 at Belfast Harlequins.

Church of Ireland and UCC have received the same sanction for their Division 2 games at Trinity and Monkstown, respectively.

All three clubs had initially been given a reprieve with those sanctions put on a “suspended” basis but Muckross duly lodged an appeal over that decision by the Irish Hockey League Sub Working Group.

The appeal cited the new Covid-19 appendices to the competition’s by-laws, circulated to clubs a day before the season started on September 25.

Those by-laws make no mention of “suspended” sanctions with the section titled “Failure to fulfill fixtures” stating when a club refuses to travel, they “shall be considered to have forfeited the fixture” with a 5-0 loss for the defaulting team. In addition, clubs who refuse to travel will also lose home advantage for subsequent games.

The independent appeals board agreed with Muckross’s argument, stating: “It appears common case that the Cork side (Harlequins) failed to fulfill the fixture. The panel takes the view that any team entering a competition must abide by the rules of that competition.

“The reasons for such failure to fulfill the Fixture, whilst compelling, are not relevant to this appeal which is confined to the decision... The suspension of a penalty is not supported in any provision of the Regulations or Appendix.” Reacting to the decision, Harlequins player and Irish senior international, Yvonne O'Byrne, said on Twittter: “Surely there's a better solution? Hockey should be a supportive community where players and clubs feel like they can voice concerns and actually be heard. Lack of consultation led to this situation. Hockey Ireland have a lot to answer for and big changes are needed to restore trust.” This now means that Harlequins drop to the bottom of the table on goal difference with one point from three games. Muckross move off the bottom with their first points of the campaign, which they gain from the sanctions being imposed.

Meanwhile Hockey Ireland issued a statement regarding the return of the EY IHL in the coming weeks.

It states: Hockey Ireland would like to thank all of our clubs for ensuring that government imposed restrictions on our sport are being followed in order to contribute to the reduction of the spread of Covid-19.

While it is hoped that the Republic of Ireland will move to a lower Level of restrictions in the coming weeks, at this moment Hockey Ireland do not know what the next level of restrictions on sport will be. Ulster Hockey is also carefully monitoring the situation in Northern Ireland.

The EYHL Working Group and the Board of Hockey Ireland have met this week and discussions have taken place in relation to returning to competitive hockey as soon as possible.

The EYHL working group has prepared three clear scenarios. The first and most positive option would be that we would be able to use two dates (December 12 and 19) for EYHL rounds, but this is only possible if training can resume in early December.

The board has given guidance to be as flexible as possible in the approach to the playing calendar.

The Hockey Ireland Covid-19 Group, which includes representatives of the Branches, will reconvene next week and discuss the various options and any feedback that the clubs may have is welcome through the Branches.

Where restrictions are not lifted for the Island of Ireland in the beginning of December, the two other scenarios would be to consider re-starting competitive hockey in early January or later in January. The option of a ‘curtailed’ season may also to be considered if the restrictions continue into 2021 or new restrictions are imposed later in the season.

We will keep you updated as soon as we have more information. In the meantime, Hockey Ireland would like to re-iterate to our members our desire to facilitate a return to competitive hockey as soon as it is possible to do so safely.