Old soldier Firhan back in squad of young guns 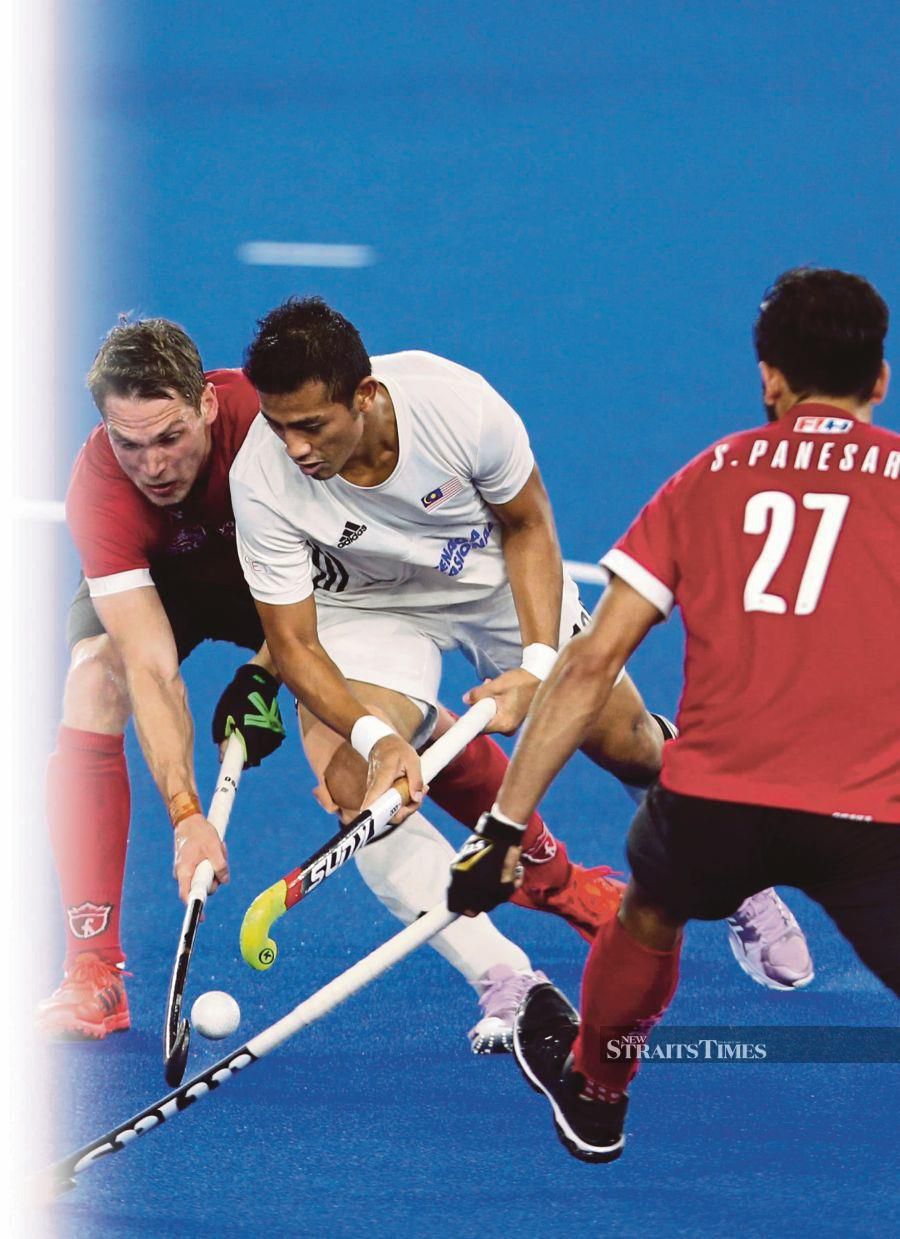 For even though he was out for 10 months due to an anterior cruciate ligament (ACL) injury, Firhan was among the 33 players who returned to the field on Wednesday.

"I got laid off by a knee injury for 10 months, and it was a pleasant surprise to be recalled for the training squad.

"Although I have fully recovered, I will still have to gradually move into higher gear as the weeks pass by," said the 27-year-old.

Incidentally, Firhan, who made his national debut at the Asian Champions Trophy (ACT) in Ordos, China in 2011, should be comfortable with training by November and ready for the ACT in Bangladesh.

Firhan has 185 international caps, and played in the 2014 World Cup in The Hague and 2018 World Cup in Bhubansswar. He was also in the team that won silver at the 2018 Jakarta Asian Games.

"I last played for the country in the World Series (May, 2019). But I went for a knee operation in July and have been out since.

"It has been a long time, but I am not worried because I always give my best in training and matches. Let's see if I am good enough to play for the country in the Bangladesh ACT," said Firhan.

Malaysia have always ended up third in the ACT since the tournament's inception in 2011, collecting five bronze medals, while India and Pakistan monopolised the gold count.

How does he feel playing with a younger set of players after Oltmans culled many seniors before the Movement Control Order?

"No difference in feeling playing alongside young players, and I am always available for advice on the pitch if they need any," said Firhan.

While national No 1 goalkeeper S. Kumar called it quits in February, Oltmans dropped many stalwarts when selecting his probable Azlan Shah Cup squad.

Nabil has opted to play in the French league while Joel wanted to focus on his new job.

There were seven national juniors drafted into the senior squad on Day 1 of training. Firhan will have to fight with them to get the chance to play in the last tournament of the year — the ACT.

Each athlete that wears the red, white and blue has a unique story to how their careers came to fruition. From the junior level to the senior squad, USA Field Hockey is putting national team athletes under the spotlight to share their journeys.

When the leaves start to turn she’s battling in the midfield in Ann Arbor, Mich. as well as the classroom. Throughout the warmer times of the year she swaps shades of blue as chants change from “Go Wolverines!” to “Go USA!” For Kathryn Peterson, her passion for the game has taken her from life on the West Coast to across the country and internationally as a member of the U.S. U-21 Women’s National Team.

Growing up in San Diego, Calif., Peterson credits a strong relationship with the athletic director at Serra High School for helping become the athlete she is today by being able to participate in four teams around the school year. For instance, by competing in cross country during field hockey season, as well as track and field in the spring, she felt more physically prepared as a student-athlete on the collegiate level. She also grew up playing with the RUSH Field Hockey club, in addition to attending as many USA Field Hockey Regional, National and Sanctioned Events as she could.

“I think that the opportunity to be on such a variety of teams for my high school, to play club at RUSH with competitive girls from all over San Diego and to participate in loads of USA field hockey events all came to together to form my perspective on team dynamics,” said Peterson. “I think that the foundation I built back in high school, by getting involved with so many varying teams, has helped me to be a stronger competitor and teammate now that I am striving to train at a higher level.”

When it came time to select a college, it was an easy choice for Peterson after visiting the Wolverine campus. Her favorite part arguably is living around a well-supported athletic community so far from home. She also appreciates Michigan's culture of embracing the grind to excel in the classroom and on the field.

“I have absolutely loved my time at Michigan so far,” continued Peterson. “I was attracted to the school mainly because of its athletic and academic reputations, and because I was sure early on that I wanted to go to college far from home. I am a declared neuroscience major and I have gained a huge appreciation for the outstanding career resources specifically for student-athletes at Michigan.”

Heading into her junior year, Peterson played in all games her first two years at Michigan, starting 33 of the 41, and holds multiple athletic and academic honors thus far. Away from campus, she has been a recognizable name in the Olympic Development Pathway. In 2017, she was named to the U.S. U-17 Women’s National Team and got her first international experience by going on tour to Ireland. She still recalls the trip across the pond in Dublin as nerve-racking, but necessary for growth as she quickly felt more natural wearing the red, white and blue jersey.

“I was very nervous and honestly, a little doubtful in my abilities because I don’t think I knew a lot about myself as a player back then,” said Peterson. “I think that also, I had been anticipating the trip for so long, that it was hard to believe the series was finally going to be played out. Over the tour I did gain a lot of confidence and grew a lot from getting to spend time abroad with such a fun, young group who really just loved to play the sport."

Peterson then moved up and spent the next two years on the U-19 USWNT. In the team’s last international tour to Germany in April 2019, she felt even more in her element alongside the rest of USA.

“I remember thinking to myself on the field that I didn’t want the games to end because the team was clicking so well,” commented Peterson. “I felt like we were seriously executing at our highest capacity and it made me really proud. It’s super exciting that the current U-21 team has even more potential."

Now a member of the U-21 USWNT, Peterson’s excitement to represent the United States is even higher as she sees more potential among her teammates and to grow individually.

While the ongoing coronavirus (COVID-19) pandemic continues to damper time on the pitch, Peterson is back home in San Diego helping in the community where she can. Before local restrictions were relaxed she logged more than 30 hours with the San Diego Food Bank, a way she could actively contribute to the community through hard times. She is also coaching local athletes in a safe manner in between runs around the neighborhood to stay in shape for the upcoming fall season. To keep her skills sharp, Peterson has also been training with fellow San Diego native and U-21 USWNT teammate, Brynn Zorilla.

New Delhi: After the successful completion of the AHF online education workshops for various Asian countries in June, Hockey India''s request to the Asian Hockey Federation for the conduction of the same workshops for Hockey India coaches and technical officials has been accepted.

Aimed at providing technical expertise and knowledge on various aspects of officiating and managing international matches and tournaments, these online education workshops will be conducted free of cost for participating candidates online through Microsoft teams application.

Each workshop will consist of a three to four hours'' session including a break. These workshops will promote and focus on the use of new and existing technology, imbibing the required qualities, assigning and clarifying role &amp; responsibilities, stating pre-tournament &amp; pre-match processes to be followed, and communicating and working with teams.

Mohd. Mushtaque Ahmad, President, Hockey India said, "I am sure the workshops will be a huge boost for our coaches and technical officials, who have a great opportunity to attain knowledge about the key aspects of their respective fields from the comforts of their home."

Meanwhile, Dato Tayyab Ikram, Chief Executive, AH) and Chairman FIH Development and Education Committee said: "Hockey India has always contributed to the growth of hockey in the world and we were delighted when HI requested us to conduct the online eucation workshops exclusively for Hockey India coaches and technical officials."

"We are happy to help as many candidates as possible through the workshops to improve the standards of coaching and officiating in Asia," he added.

Unlike previous years, where teams fielded by Hockey Karnataka and its associate members BHA and Hockey Coorg could compete in various National championships, the new policy allows only one team per State. This will rob several talented players of the chance to shine, BHA and Hockey Coorg office-bearers believe.

"We received a letter on this front in January. We replied asking them to reconsider, as such a move will kill the sport in the state.

Karnataka and Bangalore have produced so many Olympians, Arjuna awardees and medal winners in major events. Hockey is very popular in Karnataka. With three teams, more players were able to compete in nationals. Just one team means less opportunities for players,” BHA Secretary K. Krishnamurthy stated.

There is also a worry that teams fielded by Hockey Karnataka - now the sole team which will represent the State - consists primarily of players from either SAI (Sports Authority of India) or DYES (Department of Youth Empowerment and Sports).

“BHA gave chances for players from other districts who couldn't make the cut for SAI or DYES. We'll reach a state where if you don't make it to the SAI or DYES sides, it's the end of the road,” Krishnamurthy said.

Krishnamurthy added that BHA officials have no ambitions of holding office in Hockey India. "When we were granted associate membership, it was very clear that we won't have voting rights and we would not be acting as an impediment for the state body. We are complying with that. I request the IOA president (Narinder Batra) and Sports Minister (Kiren Rijiju) to kindly make an exception to the IOA charter and allow associate units - who have given so much to the sport for decades - to compete in nationals,” Krishnamurthy said.

These concerns were echoed by B. Chengappa, Hockey Coorg Secretary. "Coorg has been a nursery for Indian hockey. Our district has produced nearly 70 India internationals. Kids here love hockey more than cricket. This policy will hit the sub-junior and junior categories. Competing in nationals acted as an incentive for these kids. Now with just one team per state, many of them could be lost,” Chengappa said.