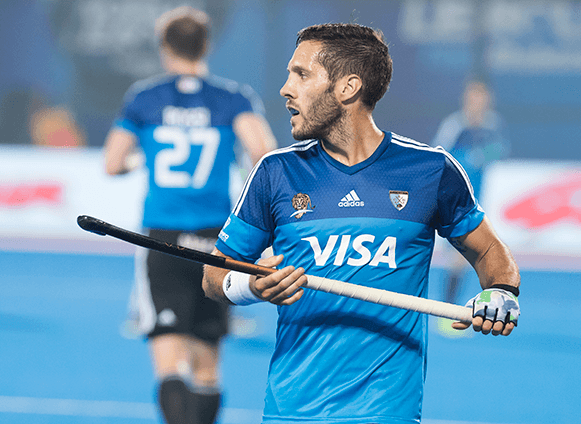 The FIH Hockey Pro League second season gets underway in January 2020 after a hugely successful first edition. We caught up with the coaches and players from the participating teams as they prepare for the new look FIH Hockey Pro League season to get underway. In the following interview, Argentina men’s attacking midfielder Agustín Mazzilli – a gold medallist from the Rio 2016 Olympic Games – looks ahead to the forthcoming season.

Los Leones (FIH World Ranking: 4) finished the 2019 FIH Hockey Pro League season in fifth position, just missing out on a place in the Grand Final due to a 4-1 away loss against Belgium in their last game of the season. Their 2020 campaign starts with a home fixture against Spain (WR:8) on 7 February 2020 in Buenos Aires.

What did the side learn from the first season of the FIH Hockey Pro League?
Agustín Mazzilli: “From the last Pro League season I learned that we had to be prepared for the whole six months. It is a really long tournament and you have to be physically really strong, and you had to be mentally stronger to try to get into the play-offs [Grand Final] at the end of the season. For [the 2020] season we will try to be as fit as we can and get there with the whole team because it is an Olympic year.”

What are your thoughts on the new FIH Hockey Pro League format that will be introduced in the second season?
Agustín Mazzilli: “The last calendar for the Pro League was really hard for us. We have a lot of players who play in Europe, and the calendar wasn’t the best for us. But now we will have our best team every game, and this will make us get more results and be near the top of the rankings.”

Which fixture are you most looking forward to?
Agustín Mazzilli: “I think Belgium, being the world champions at the moment. It’s always the rivalry we want to play and [the team] you want to beat, [especially] as we lost our last game to get into the [Grand Final] last year. We will try to get the result against them every game.”

What was your #MyProLeagueMoment from the first season?
Agustín Mazzilli: “My Pro League moment from last season was playing against Holland at home. We were losing and we came back to win 4-3. But this was also a bad moment as I injured my shoulder in that game, but at the end of the day we won the game and that is the most important part.”

What message have you got for the fans to get them along to watch the matches in the second season?
Agustín Mazzilli: “I invite everyone to join in and watch the Pro League. It’s a great tournament worldwide, and a fantastic sporting event. Follow us and watch every game of the Pro League.”

All is in readiness for the biggest indoor tournament on the Hockey Australia calendar year.

Wollongong will be a hive of excitement and activity with over 700 players plus coaches, support staff, officials, families and friends from across Australia descending on the New South Wales city for the Australian Indoor Hockey Festival 2020.

Commencing on 4 January, the Illawarra Hockey Centre will play host to 23 days of quality indoor hockey spread across five age groups – Open, U21, U18, U15 and U13.

The Open Division will commence proceedings, followed by the Under 21s, Under 18s, Under 13s and winding up with the Under 15 competition.

“Importantly, I want to acknowledge and thank the numerous volunteers for offering their time, skills and energy as without them this festival would not be possible.”

“Hockey Australia also wishes to express its thanks and gratitude to Destination NSW, Destination Wollongong and all of the tournament’s corporate partners for their support.”

Spectator entry to the festival is FREE.

Furthermore, every match of the Open competition will be streamed LIVE on the Hockey Australia YouTube channel.

The under-13 boys were one of the great stories of the state indoor championships for Hockey New England.

Hockey New England will have it's biggest-ever representation at the upcoming Australian Indoor Hockey Festival in Wollongong following a stellar showing from the association's various sides at their respective state championships.

Eighteen HNE players will suit up for NSW throughout the 23-day tournament, which gets underway on January 4.

HNE indoor convenor Paul Eichorn said it was a great result for the association and attributed the success to a strong focus on indoor through the local competition.

"The local competition has grown to accommodate some 60 teams, both senior and junior, and is represented by most of the primary schools in Armidale," he said.

"We're not focusing on existing hockey players. We night have between 80 and 100 players that don't play outdoor hockey."

"It's turning into a production line. It's not a side board stuck onto the outdoor season."

The state campaign was headlined by the 18s boys, who won a third straight title.

"They are just an outstanding side and have been for years," Eichorn said.

The 13s boys were another great story, he said.

After winning their relegation game the previous year to stay in Division 1, they ended up being dropped to Division 2 because the two sides playing for promotion drew.

They ended up finishing third and had four players selected in the NSW sides, one of whom is only 11-years old.

Archie Clarke is set to join older brother Elliot in state colours, in what will be his second national championships in the space of 12 months after being selected in the NSW PSSA outdoor side.

"Archie is a bit of a talent," Eichorn said.

He is tipping big things from the 13s boys over the coming years, likening them to the all-conquering 18s boys.

In other results the 13s girls maintained their spot in Division while the 18s girls finished fifth in Division 1. The under-15 girls "had a bit of a horror run" but the boys earned promotion back into the top division after finishing runners-up in Division 2.

The open men were also runners-up in Division 2, while the open women kept their place in the top division.

KARACHI: Pakistan Hockey Federation (PHF) secretary Olympian Asif Bajwa has said that the PHF has contacted four European countries for test series in April and May next year.

He told ‘The News’ on Sunday that France, Belgium, Germany and Holland are situated close to each other and travelling among them is easy. “Therefore, we are trying to arrange test series with their junior teams. We will contact the hockey federations of these countries in a couple of days for this purpose and hope that we will arrange test series with them,” he said.

The PHF secretary further said that they wanted to host a juniors series during January or February. “Besides, the juniors will play a series against the seniors when they will be preparing for Azlan Shah tournament,” he added.

Bajwa also said that domestic hockey calendar 2021 has been prepared and it would be announced soon. He also said that PHF is keen to organise the Pakistan Hockey League ( PHL) in 2021.

He further said that Pakistan senior team would participate in Sultan Azlan Shah tournament in Malaysia in March. The training camp of the seniors would be held in February, he said.

The juniors training camp would also be in full swing at that time and they would play against each other which would benefit both, especially the juniors.

The junior team management would be announced in a couple of days and the training camp of more than 50 players would be held in Lahore, the PHF secretary said.

He said PHF has focused its efforts on the promotion of junior hockey across the country and the preparation of the junior team for Asia Cup 2020 and World Cup 2021.