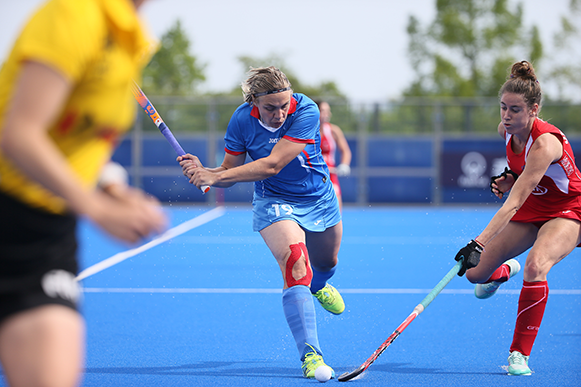 In the latest of a series of video interviews with the teams that will participate in the upcoming FIH Hockey Olympic qualifiers, Russia (WR:19) striker Bogdana Sadovaia looks ahead to her team’s crucial two-game clash against the Hockeyroos of Australia (WR:2). The all-important matches will take place on 25/26 October 2019 at the Perth Hockey Stadium in Western Australia, with the winner securing a ticket to the Olympic Games Tokyo 2020. A transcript of the video can be found below.

The FIH Hockey Olympic qualifiers will be taking place very soon. How will your team prepare for these hugely important matches?

Bogdana Sadovaia:“Right now we have acclimatisation days. Every day we have training and analysing the game of our opponent.”

What can we expect to see from your team in the FIH Hockey Olympic qualifiers?

Bogdana Sadovaia: “We [recently] had a good practice game in Belgium, which was good for my team. I think we can do it [beat Australia].”

What are your thoughts about Australia, your opponent in the FIH Hockey Olympic qualifiers?

Bogdana Sadovaia:“Team Australia [always] participate in the Olympic Games, which is our objective. They have a very good, fast and strong game, and we are [preparing] for this.”

Finally, what would qualifying for the Olympic Games Tokyo 2020 mean to you and your team?

Bogdana Sadovaia:“If we win the games, I think it will be a big celebration for my country, my team and all of the family of hockey in Russia.”

Each qualifier consists of two back-to-back matches which will be played in the same venue. The winners of these FIH Hockey Olympic qualifiers will qualify for the 2020 Olympic hockey tournaments which will be staged in Japan’s capital city from 25 July to 7 August next year and involve 12 Men’s and 12 Women’s teams.

Shane O’Donoghue says Ireland are in a good place ahead of their huge men’s Olympic qualifiers next weekend at Rutledge Field in Vancouver.

They face a double-header against Canada with the best aggregate score from the games on Saturday and Sunday deciding the ticket to Tokyo.

Speaking to the FIH this week, he said: “Preparation is going well. We have been together for the past six or seven weeks at camps here in Ireland, so things are going quite well.

“We we played two games against France, two competitive games and we came away with two wins. That was good for our morale after a disappointing summer.

“The spirit has lifted on and off the pitch so we are in a good place. We have been working on a few different things, especially with a new coaching staff coming in. We have gone right back to basics and what was serving us well a few years ago and try to replicate it again.”

Asked what he expects from the games with Canada, he added: “This group has always been, and will continue to be, very ambitious. There is a lot of belief in the group and a nice dynamic.

“People will expect, particularly between ourselves and Canada, two evenly-matched teams, it is going to be a battle, there is no question about it. We are ready for it but no doubt Canada are as well.

“You will see a lot of belief in our game. It is a winner-take-all couple of games so we will go in all guns blazing, full of energy, full of belief and full of Irish fighting spirit, as we always have.”

O’Donoghue is bidding to be part of his second Olympic Games, something he regards as “the pinnacle of hockey for every international player”.

“I’ve experienced it once already as have a number of guys in the team. To experience it again would be extra special. With this current group there is a nice dynamic. It is a good blend of youth and experience and it is a very tight group. It would be very, very special for this group to go to the Olympics.

“And, for a small sport like us in Ireland, it would certainly keep us in the limelight. For the sport as a whole, if both the men and women were to qualify, it would be fantastic. It’s a dream on the line, two games to achieve that dream again and experience what a fantastic journey it is to go the Olympic Games.”

LAHORE - Pakistan Hockey Federation (PHF) on Tuesday named four standby players to replace four players during the two matches of Olympic Qualifiers being played in Holland on October 26 and 27.

The visas of two players including goalkeeper Waqar and Hamad-ud-din Anjum have been delayed and Muhammad Rizwan Senior and Abu Bakar Mahmood sustained injuries during training sessions in Germany prior to two test match series against Germany side.

“In consultation with Chairman and Members of National Selection Committee Mazhar Abbas (GK), Muhammad Rizwan Junior, Muhammad Atiq Arshad, Amjad Ali Khan (defender) have been included in the squad,” said PHF spokesman here. Irfan Senior, who has applied for visa in Dutch Embassy in London, in case of visa denial, Amjad Ali Khan will replace him, he said.

Field hockey goes across the Bay Junior attacker Corinne Zanolli (left) leads the nation in goals with 22. Zanolli scored both goals in an earlier win over the Bears and has three hat-tricks this season.

No. 19 field hockey (10-6, 2-0 AEC) looks to keep their undefeated record in conference play as they head across the Bay to take on rival Cal (7-8, 1-1 AEC). The Cardinal enter the match having just handily won an away game against conference opponent UC Davis on Sunday.

In recent years, Stanford has dominated the Golden Bears, and have lost only twice in their previous 18 meetings. In the rivalry match on the Farm earlier this season, senior goalkeeper Kelsey Bing shutout California, and the Cardinal soundly won 2-0.

Bing will soon be seeking to help Team USA land a spot in the 2020 Olympic Games.

On Tuesday, junior attacker Corinne Zanolli can be expected to play a particularly significant role. Last year, Zanolli had a breakout season, setting the single-season school record with 26 goals in her sophomore campaign. This season, she’s already had three hat tricks. Having scored 22 times this year, Zanolli also leads the nation in goals.

Sophomore midfielder Fenella Scutt and redshirt sophomore defender Sarah Johnson can both also be expected to contribute heavily against Cal. Scutt averages .73 assists per game and Johnson averages .77, nationally ranking them eighth and sixth, respectively, in that category. In their most recent game against UC Davis, Scutt tallied both a goal and an assist. Johnson also recorded an assist.

Stanford will also be looking for scoring opportunities off of penalty corners. Of their 43 goals this season, the Cardinal have notched 16 scores resulting directly from penalty corners. Zanolli’s 22nd goal of the season against UC Davis came off of a corner.

With just one more conference game on the schedule after this Tuesday, Stanford wants a strong finish to the regular season ahead of postseason play. The Cardinal have won two of the past three America East Conference championships and have also qualified for the NCAA tournament in 10 of the past 12 seasons. To guarantee qualification for the NCAA tournament, Stanford will have to win the America East Conference tournament which starts on Nov. 6. Ending the regular season on a win streak will help give the team some momentum as they enter the postseason.

Under current head coach Tara Danielson, the Cardinal have consistently been successful. In each of Danielson’s nine years at the helm of the field hockey program, Stanford has won at least thirteen games. A win on Tuesday would continue the Cardinal’s sustained success.

Stanford will play against Cal in Berkeley at 3:00 PM PT on Tuesday, Oct. 22.

Ten up as Ausdrill renews as Hockeyroos’ Naming Rights Partner

The partnership between mining industry leader Ausdrill and the world number two ranked Hockeyroos has been further strengthened with a new two year contract renewal that will take the partnership past a decade.

Ausdrill’s association with Australia’s national hockey teams first began in 2011, and its continuation as the Official Naming Rights Partner of the Hockeyroos and the Official Supporting Partner of the Kookaburras will take the partnership up to 2021.

In addition to valuable funding for the Hockeyroos and Kookaburras High Performance Program, the partnership also encompasses a range of other benefits.

Ausdrill is dedicated to supporting Hockeyroos players with career development, study and employment opportunities to assist them during and post playing hockey.

Both parties will develop a joint plan focused on promoting hockey through indigenous engagement and other community development initiatives, while also looking to promote gender diversity in mining.

“Ausdrill has shown incredible loyalty and commitment in its alliance with Hockey Australia and particularly the Hockeyroos, and we look forward to continuing to build on the partnership and strong relationships that have been forged.”

The timing of the announcement comes at a fitting time with the Hockeyroos preparing for their Olympic Qualifying Series against Russia this Friday and Saturday.

Since the start of the partnership the Hockeyroos have risen from seventh to second in the world rankings.

“The Hockeyroos are one of the most successful national sporting teams in Australia and we are proud to be part of that and to extend our partnership with them, the Kookaburras and Hockey Australia for a further two years,” said Mark Norwell, Group Managing Director - Perenti.

“This is an exciting time for the team and we wish them all the best for the Olympic qualifier this coming Friday and for the duration of our partnership.”

Ausdrill is one of the largest drilling service providers in Australia and is part of Perenti, an ASX200 diversified global mining services group with businesses in surface mining, underground mining and mining support services.

In recognition of the partnership renewal, a special presentation will be made at half time of the Hockeyroos’ opening Olympic qualifier against Russia at the Perth Hockey Stadium on Friday.