Scotland women were defeated by a late Deidre Duke goal as Ireland won the second of three matches 1-0 in Stormont. The matches against the World Cup silver medalists are preparation games for Scotland who play in Women’s EuroHockey Championship II in Glasgow on 4-10 August.

Top ten ranked Ireland are also deep into preparations for competing in the EuroHockey Championships in Antwerp. The previous meeting in the series between the two saw Ireland win 2-0 with second half strikes. Scotland are missing several players including Charlotte Watson; Sarah Robertson and Amy Costello who are all playing for GB Women in Japan.

The contest was a midfield duel for portions of the match with two committed defences working hard. Scotland rotated their goalkeepers and both Amy Gibson and Nicola Cochrane made some excellent saves in the match to prevent Ireland from taking the lead.

Sarah Jamieson was having a good impact on the game for Scotland and threatened the Irish net with some play in the D. Emily Dark also looked sharp but solid Ireland defending prevented the Scot from a clean strike at goal.

After Ireland had played a good third quarter, Scotland went searching for a winner in the fourth but were caught out by an Ireland counter. With six minutes remaining Ireland grabbed the lead through a goal by Deirdre Duke.

Scotland Head Coach Jen Wilson said, “It was a good performance today. We tried playing with a slightly different press for this match and it really limited the amount of chances Ireland had. I’d like to see us create more chances for ourselves but we had our moments, particularly towards the end of the game, and have to give Ireland credit for some good defending.

“It was a good run-out; we have a day now to reassess and plan what we’ll try out for the final match. Kerry-Anne Hastings and Heather Howie are joining the squad for the last match – we’ll rest Robyn Collins and Louise Campbell who are managing injuries. We’re looking forward to the last game.”

Scotland U21 men won their opening game of Men’s U21 EuroHockey Championship II 6-1 against Portugal in Plzen Litice, Czech Republic. Cammy Golden bagged a hat-trick; his brother Jamie Golden scored one; as did David Nairn and Struan Walker.

Portugal opened the scoring early when Vasco Ribeiro converted a penalty corner to make it 1-0.

Scotland dominated the match and soon equalised when Jamie Golden smashed home a penalty corner to make it 1-1.

Then the Scots went in front; Andrew McConnell powered forward down the right and picked out David Nairn who made it 2-1 from close range.

In the third quarter the Scots began to turn the screw with David Nairn and Cammy Golden probing around the Portuguese D.

Scotland furthered their advantage from a penalty corner, Cammy Golden launched a drag flick into the roof of the net to make it 3-1 for Scotland. It was a sublime effort and the goalkeeper could do absolutely nothing about it.

Jack Jamieson was then denied by the leg guards of the goalkeeper as Scotland went searching for a fourth.

The fourth goal would come when Struan Walker pounced on an error, thundered into the Portugal D, and clinically fizzed the ball into the bottom right corner for 4-1.

Cammy Golden struck his second and Scotland’s fifth from a nice penalty corner routine; a dummy and pass gave Golden the time to pick his spot in the top right corner for 5-1.

Minutes later it was a hat-trick for Cammy Golden when he forced the ball home through the goalkeeper to make it 6-1.

Head Coach Graham Moodie said, “It was a slow start for us, and going a goal behind wasn’t ideal, but the boys dealt with it well and our quality came through as the match went on. It was a bit of a challenge not seeing Portugal play before today but we did well to work them out and win the match.

“It was a really good team performance and also really nice to have the forwards on the score sheet. Russia will be a tough game; they have some good individual players and won’t make it easy for us. We have a lot to build on and are looking forward to the next match.” 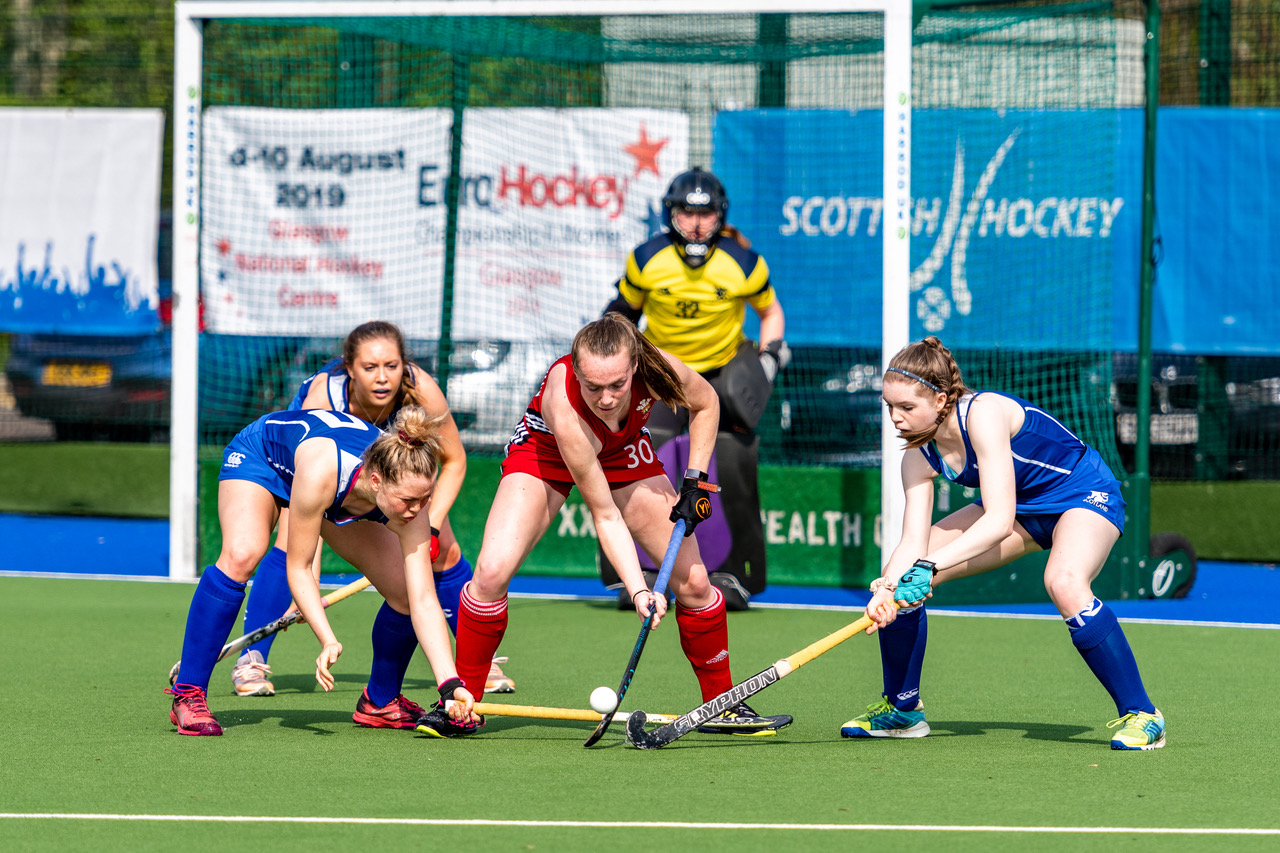 Scotland U21 Women got their U21 EuroHockey Championship II campaign underway was a goalless draw against Wales in Alanya, Turkey.

It was a close contest from the first whistle with both sides taking to the game with the drive to win. Both teams had spells of possession but with no clear opportunities.

Wales probably edged the chances in the first half, most of them coming from smashing the ball into the Scots’ D and looking to connect with a loose ball.

There was an excellent chance for Wales through a lovely break on the right side, but Jess Buchanan, who had a solid game in goal, was out quick to smother the danger.

In the final quarter Scotland were on the offensive and could have nicked the contest. An excellent diving stick save from the Welsh keeper denied Scotland a winner and meant the teams shared the points on opening day.

Scotland U21 Women’s Head Coach Neil Menzies said, “It was a tight game, Wales are a decent side. We could have stolen it in the final quarter but a draw was a fair result.

“It’s going to be a tough set of games in this tournament. We play Czech Republic next and they look a decent side. We’re very capable of beating them but it will be a tough game.”

Strong start for England Under-18 Boys

England Under-18 Boys made a winning start to the Six Nations Tournaments in the Netherlands on Sunday, beating Ireland 4-0 with a strong performance.

Two goals from Tom Moorhouse helped England to victory, although the whole team worked well together to take the win and keep a clean sheet against an Ireland side who made some quick breaks.

Head Coach Jody Paul said afterwards: “It’s nice to start the tournament with a win and hopefully the boys can keep playing well and take this forwards into the latter stages of the tournament.”

Moorhouse got England off the mark in the ninth minute of the first quarter with a diving chip at the far post, and they doubled their lead on 23 minutes. Again from open play, Barney Bithell scored after tidying up in front of goal.

Moorhouse claimed England’s third goal on 52 minutes with a superb reverse shot across goal following some good work down the right wing.

Finally, England’s fourth goal came two minutes from the end of the match, and it again came from open play. After good build up play from England Dylan Holland tidied up with the final shot which took a deflection off the Irish goalkeeper.

England continue their Six Nations campaign with a match against Spain tomorrow at 11am (UK time).

Wellington who had won the tournament in 2018 would go on to secure the Bronze Medal as they held their nerve in a penalty shootout win against South Canterbury.

Canterbury have taken out the 2019 National Association Tournament in Timaru, coming up against Auckland in the final, Canterbury would find themselves behind after Auckland’s Charlotte Penny scored. Looking to regain the title Canterbury struck back almost instantly and took a 2-1 lead into the break. Auckland then struck back before Canterbury held their nerve to secure a 3-2 win.

Wairarapa would defeat their neighbors Manawatu 4-2 to take the Bronze Medal at the tournament. 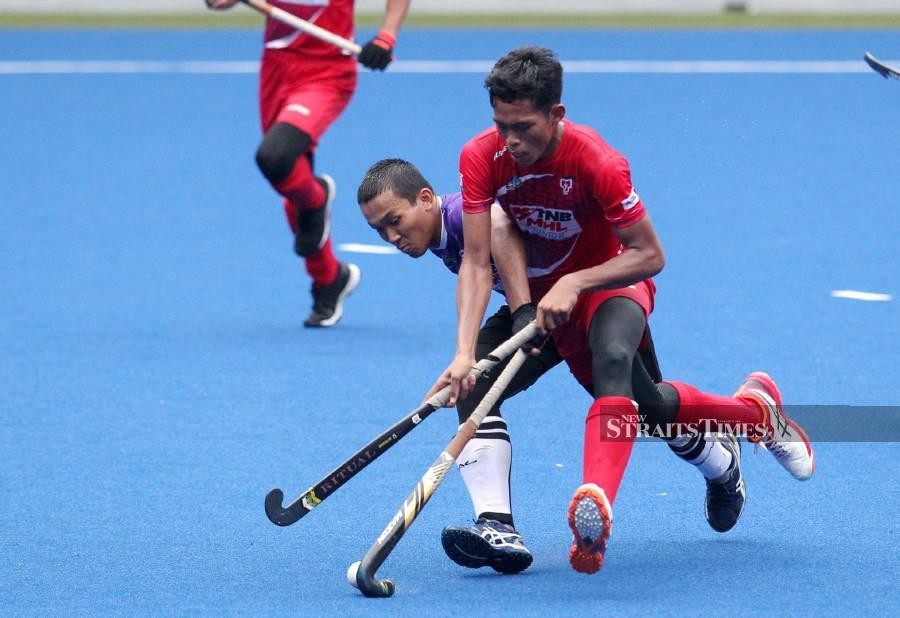 And his efforts paid dividends as his side thrashed Pahang 5-1.

Pahang were supposed to walk all over BJSS and claim the runners-up spot with three matches in hand, but Prakash turned the tables on them.

“I had to shout instructions from the sidelines the entire game because my young players, who are 16 years and below, were playing against matured Under-19 players.

“My centre forward is only 15, and although all can play, they sometimes keep forgetting what to do in the heat of the moment.

“But they know that one day they must silence me with their performance,” said Prakash.

Yesterday, Prakash played three characters — as an umpire, a rowdy fan and a coach.

“Left, right, don’t tackle, don’t give up, wait! And what are you doing Aiman, watching a movie?

The coach started raising his voice inside 30 seconds of the match when Pahang’s Haikal Ridwan Osman hammered home the lead, which also turned out to be their only goal of the day.

Blowing his top at the early goal, Prakash started his tirade and amazingly, BJSS equalised in the second minute through Amirul Hanif Mamat, who then completed his hat-trick in the seventh and 20th minutes.

The other two goals were netted by Aiman Zulkifli (13th) and Adam Daniel Ferozs (52nd).

BJSS have played 11 matches while SSTMI and Pahang only 10.

“We still have three more matches to try and win the silver medal.

“This defeat was due to our hectic travelling schedule, which got to the boys in the end,” said Pahang coach Sufian Mohamad.