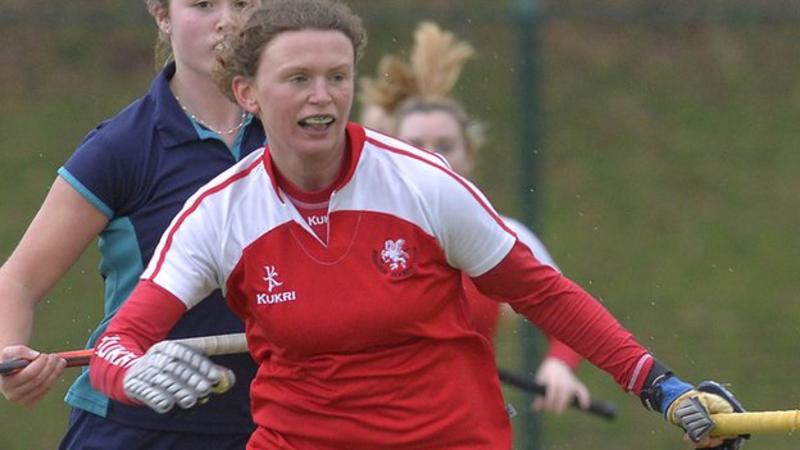 Alex Speers scored a double for Pegasus against Belfast Harlequins

An easy Boxing Day 4-1 victory for Banbridge saw them win the trophy for the 22nd time in the club's history.

Pegasus needed a shoot-out to win after their final had finished 2-2.

They were made to work hard by Belfast Harlequins for their first win in the Ulster Shield since 2012, but their 29th overall in the competition.

Pegasus took an early lead through Alex Speers, who went on to double their margin just before half-time.

Harlequins produced a fine comeback after the break, with Jenna Watt pulling the first one back and Abigail Edwards scoring the equaliser to take the game into penalties.

Harlequins missed two of their first three efforts, but Pegasus missed with their last two attempts to send the game to sudden death. Gemma Frazer missed for Quins, allowing Ruth Maguire to score and win it for the Pegasus.

In the Kirk Cup, two goals in two first-half minutes from Bann set them on their way to victory with Tinney converting a penalty corner and McKee a penalty stroke.

Moffatt's back-post finish made it 3-0 before half-time, with Farson scoring into an unguarded net before Caruth's late consolation.

Corinthian line up a corner against Three Rock in the Mills Cup final. Pic: Adrian Boehm

Corinthian coach Trevor Dagg knows that while reigning champions Three Rock Rovers will not field their front-line first team, there are few better equipped sides in Ireland to cope with the new rules when it comes to St Stephen’s Day’s Neville Cup final.

This season saw the competition’s regulations tweaked to limit EYHL clubs from using their top 13 registered players, allowing only those who can feature in Leinster league games to play.

It means Rovers will field largely a second team in the decider at Serpentine Avenue at 2pm. The adjustment has seen Leinster league clubs be far more competitive with three of the four semi-finalists coming from Division One.

Three Rock, though, won this title a year ago with a largely second-tier side with goalkeeper Shane O’Brien putting in a man of the match performance.

And Dagg knows plenty about their strength in depth: “Rovers are going through a real golden period at the moment and they probably have 30 to 35 players who can play first team hockey,” he said.

“You have guys like Peter Blakeney and Garry Ringwood. They would get into any team, even at this stage of their careers and so this will be a very difficult game for us.”

Beyond that duo, the Rovers side is largely made-up of teenagers with Luke Adams, Ali Empey, Alex Flynn, Sam Walker, Calum Adair, Sam Ryder and Matthew Walker all on the initial squad list named for the tie.

Corinthian, meanwhile, are having a strong campaign with plenty of wins across the Leinster and EYHL2 leagues as well as cup runs in the Neville, Mills and Irish Senior.

For them, despite being a couple of weeks into the season, Dagg cites early October as the key phase for his squad when they played Railway Union four times in quick succession.

They lost the first tie in the Leinster league 3-1 before facing into three cup encounters against the Sandymount side back-to-back.

“We had a meeting after that first game and said if we don’t do anything in these games, our season could almost be over already.”

They won all three to give a huge amount of impetus to the campaign. They have 15 wins out of 18 this season with Ian Stewart banging in over 20 goals while Conor Motyer’s return after a year out with an Achilles injury has been a massive boost.

It has been a gruelling schedule but Dagg says: “When you are winning, it’s not an issue. Thankfully we haven’t been too hamstrung win injuries and have built a broader player base.

“It’s a lot of hockey but, in fairness, we are having a cracking season.”

“When you are winning, it’s not an issue. Thankfully we haven’t been too hamstrung win injuries and have built a broader player base.

“We had two separate weeks where we had four games in a week so we have had to rotate the players between games and also managing it within games.”

The reds are in the decider of the festive cup for the first time since 2014 with Dagg reporting a full bill of health. The last meeting of the two sides was in March’s Mills Cup final.

From that day, four of the Rovers players are likely to feature again – with eight from last year’s Neville final side – while the reds can no longer draw on Jonny Bruton, Neil Pelow and Henry Micks but still have around a dozen players lining out again from the St Patrick’s Day meeting.

KUALA LUMPUR: Seasoned campaigners Maybank have struggled to make an impact in the Malaysia Hockey League (MHL) over the last few years.

The Tigers, although being powered by six foreigners, finished a disappointing fifth in the Premier Division with just a win from 10 matches in this year’s league.

The Tigers last won the league title in 1995. And for the 2019 season, the bank have decided not to hire foreign players and will instead rely on local players.

The Tigers, who have been featuring in the MHL since its inception in 1987, have named former national player and their employee Azrul Effendy Bistamam as the new coach.

Azrul was the assistant coach to Shaiful Azli this year.

The 39-year-old Azrul thanked Maybank for his appointment.

“We hired foreign players in the last few years, but we failed to get the desired results.

“So we have decided on an all-local team for the new season comprising eight juniors as we aim to build the team for the future.

“We need to focus more on the local players as we want to build a strong foundation for our players,” said Azrul, who has a Level Two coaching certificate.

Mohd Kamaruzaman Kamaruddin, who was a member of the Malaysian team who won the gold in the Youth Olympics Games in Buenos Aires, Argentina in October, will play for Maybank.

“We also have a number of former national players like Hafifihafiz Hanafi, Mohd Riduan Nasir and Mohd Amerullah Abdul Aziz.

“I have a tough task ahead of me as I want to help Maybank finish in the top four among the seven teams in the Premier Division next year,” said Azrul.

Maybank will open their campaign against UiTM in the Tan Sri P. Alagendra Cup on Jan 3.