Hockey year-ender: Nothing to cheer about, Asia Cup gold only hurrah for Indian team

Successes were few and far between till the Indian men’s hockey team ended the year with Asia Cup gold and bronze in Hockey World League Final and women emerged Asian champions. The Indian hockey team won the Asia Cup in Dhaka in October. That was one of the highlights of 2017. (PTI)

The Indian men’s hockey team ended the year the same way they had started — winning bronze. In between, they were sublime at times and ordinary on occasions, struggling for consistency — a malady that has stymied their growth for years.

The men’s team kicked off the year, finishing third in the Sultan Azlan Shah Memorial in April-May. The feeling of euphoria was replaced when they lost to hosts Malaysia that halted the team’s march to the final.

There was an early setback as captain and goalkeeper PR Sreejesh, one of the best in the business, suffered an ACL injury and was out for a lengthy period. He is yet to return to competition.

Akash Chikte and Suraj Karkera stepped up to the plate to share the goalkeeping responsibilities while Manpreet Singh was named captain for India’s next major assignments --- the tour of Europe followed by the Hockey World League Semi-Final in London.

Manpreet thus emerged as the new fulcrum in the Indian midfield, taking over the mantle from Sardar Singh, the former India captain who had a poor year. Questioned by British police in London over a complaint by a former girlfriend, Sardar was shunted up and down the turf before being dropped for the Hockey World League Final. As the team gets ready for bigger challenges in 2018, Sardar’s return looks bleak.

India had mixed results on the tour of Europe, highlighted by a couple of wins in Test matches over World No 4 Netherlands and Austria, but their campaign in London was a disaster as they slumped to defeats against lower-ranked Malaysia and Canada to finish sixth --- a poor performance by a team ranked sixth in the world.

The London debacle cost chief coach Roelant Oltmans his job. The 63-year-old was replaced by his Dutch compatriot Sjoerd Marijne, who moved from the women’s team to take up the job. Marijne’s entry seems to have fuelled new enthusiasm in the team and the Dutchman was successful in his first assignment — the Asia Cup in Dhaka — as India bagged gold after a decade.

India also avenged their twin defeats to Malaysia earlier in the year and registered their seventh successive win against Pakistan.

The integration of seniors with junior players seems to be bearing fruit.

India started their campaign at the Hockey World League Final in Bhubaneswar with a spirited display against Australia, holding the world champions 1-1, but defeats to England and Germany meant they met Belgium, their nemesis in Rio Olympics, in the quarterfinals. Manpreet and his boys came up with their best performance of the year, overcoming the World No 3 in a shootout after being held 3-3 at the end of 60 minutes.

India, however, slumped to a 0-1 defeat to Olympic champions Argentina on a soggy Kalinga Stadium turf, unable to adapt to the playing conditions, but came back to quell a depleted Germany in bronze-medal match.

The women’s team has only two singular successes to talk about — the gold it clinched at the Asia Cup after a gap of 13 years, which booked their ticket to next year’s World Cup in London, and an entry into the top 10 in world rankings. The Indian women had some wins against China and Japan but did not find similar success against stronger teams.

They staggered from one event to another, winning gold at the HWL Round 2, but finishing eighth in the HWL Semi-Final, their progress hampered by another change of coach. They started the year with Marijne and ended it under the tutelage of Harendra Singh.

But as 2017 draws to a close, there is still hope for Indian hockey and the results could be better if one manages to harness the abundant talent in the country. 2018 is a big year for hockey with the Commonwealth Games, Asian Games and World Cup in the schedule. The teams will have to work on a ‘three-peak’ strategy, using their bench strength to make maximum impact in all three majors. 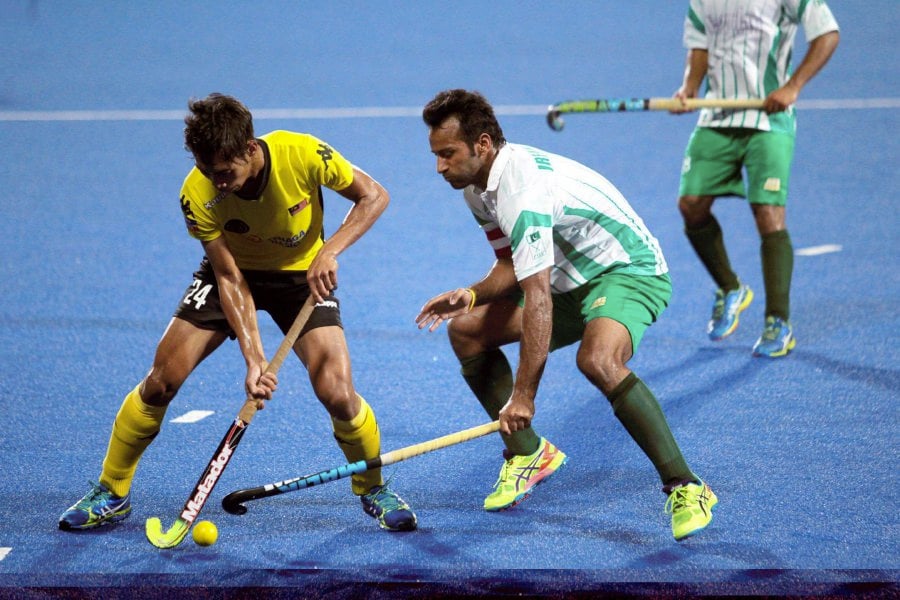 KUALA LUMPUR: Former world champions Pakistan have confirmed their participation in the Sultan Azlan Shah Cup in Ipoh on March 2-10.

Others in the fray are Malaysia, Australia, Argentina, England, India and Ireland.

Malaysia will be using the tournament to prepare for the Gold Coast Commonwealth Games, Indonesia Asian Games and the World Cup in India.

Nabha - In an absorbing encounter, defending champions EME, Jalandhar, managed to subdue a fighting Rock Rovers, Chandigarh, on the second day of the 42nd Liberals All India Hockey Tournament here today. Veteran forward Biju Singh scored in the 15th minute, while Gurmeet Singh converted a penalty corner in the 19th minute. After the breather, Rock Rovers attacked relentlessly and forced as many as seven penalty corners but the solid EME defence withstood the repeated onslaughts to emerge 2-0 winners.

In the first match of the day, ITBP, Jalandhar, got the better of Green Chillies XI, Nabha, in a closely contested encounter. ITBP scored in the 25th and 35th minutes through Jaswinder Singh and Amarvi Singh to take a 2-0 lead. Gurvinder Singh reduced the margin with a penalty-corner conversion in the 42nd minute. However, defender Lawrens restored ITBP’s two-goal lead from a penalty corner which was won after a counterattack. Lawrens was again on target in the 47th minute. The Nabha team retaliated with a goal by Tarandeep in the 48th minute. ITBP added another goal with a penalty-corner conversion in the 58th minute.

Two quick goals in the 60th and 61st minutes, by N Tirkey and Gurwinder Singh, helped Green Chillies XI narrow the margin again. But ITBP held on to emerge the winners.

Despite being two of Leinster hockey’s most decorated clubs, Pembroke and Three Rock Rovers serve up a strangely novel Neville Cup final line-up on St Stephen’s Day when they meet at Serpentine Avenue (2pm).

For Rovers, it is a first final appearance in the competition since 2007 while the host club’s wait for Neville Cup victory goes back even further. That 2007 meeting saw Rovers win out 6-1 against Pembroke, albeit against a side that was shorn of several front-line players due to a team skiing trip.

It is their third final appearance in a decade but victory has eluded them, partially due to the cosmopolitan nature of their panel, something Jonny Caren have to contend with once again.

Last year, Caren shuffled the deck for the final with a number of key players away and, for this year’s encounter, he may have to do something similar. With several players originally from Munster – along with Cedric Mushiete from Belgium – getting a full batch of players back to Dublin is unlikely to be possible.

Their route to the final has been a quick one, beating Monkstown 4-1 in the first round before running up a 6-0 quarter-final victory over Kilkenny on December 12.

It should have set up a semi-final against UCD who had eliminated Railway Union three weeks earlier. The onset of exam season, however, saw Rudi Wortmann’s side withdraw from the semi-final, allowing Pembroke direct passage to the final.

Three Rock, meanwhile, beat Avoca 5-1 in round one before edging past Glenanne in a shoot-out in their quarter-final after a 1-1 draw in normal time.

On Tuesday evening, they reached the final with a 4-2 victory over Dublin University in a well-matched tie. Kevin Mullins’ gliding touch broke the deadlock in the first few minutes before Robbie O’Hanlon equalised.

Mullins arrowed in a second from the left of the circle to restore the Rovers lead before Rob McCollum’s excellent reverse made it 3-1 before half-time. Conor Empey’s low drag-flick completed their tally before Rory Nichols’ drag beat Shane O’Brien late in the game.

For Rovers, Niall Denham has been giving youth its head so far in the Neville Cup with Harry Lynch making his first team debut, lining out in centre midfield alongside Luke Adams.

Denham was also able to give comebacks to David Kane and James Walker after spells out injured. Peter Blakeney – along with O’Brien, one of two players over 23 in the Tuesday panel – picked up a knee injury 10 minutes into the semi-final and so may be rested.

Definitely out for Rovers are Richard Pautz and Jody Hosking who are both back in South Africa for Christmas but the rest of the panel is Dublin-based.

There is no entry fee to the final but all contributions are welcome on the day for the Cottage Home charity.

In Munster, meanwhile, UCC coach Dave Egner is anticipating a far tougher encounter in the Peard Cup final against Cork C of I B than when the sides met in the Munster Division One in October.

Then, they swept to a 5-1 win but the St Stephen’s Day decider has a habit of producing the odd rogue outcome and Egner is wary of discounting the Garryduff side.

John Mullins on the attack against Pembroke. Pic: Adrian Boehm

UCC have since won all four of their league ties to date while C of I have yet to register a point, a by-product of their first team departures to Dublin during the summer. But Egner saw enough in C of I’s semi-final shoot-out win over Ashton to be concerned.

“We are still favourites but it is going to be much tighter than the league game,” he told the Examiner. “In their semi-final, they looked very good going forward and they move the ball very fast. It’s also their pitch and their crowd so I would expect a much tougher tie.”

For the students, Kilkenny natives Sam Grace and Eoin Finnegan may have a little weariness in their legs as they travel down to the tie on the morning of the match. Otherwise, Egner has a fully fit panel to select from.

There is plenty of know-how in Shrew Power and Adam O’Callaghan while Darren Wilkinson and Brian Stockil will be looking to win the title for a second successive season having made the move during the summer. They are gunning for a second title of the season having already won the intervarsity Mauritius Plate.

For C of I B, they are the reigning champions but will need goalkeeper Peter Coulter – an Irish Under-21 panelist – to be on his game while Ken Twomey in midfield and Mark Gallagher up front are the other key men.

Elsewhere, Bandon reached the second round of the Irish Hockey Trophy on Saturday with a 4-2 win over Ashton.

New South Wales hockey gets a boost with new arena The first sod has been turned on a new $1.6 million Far North Coast Regional Hockey Centre expansion project in Goonellabah

‘This is great news for our community and cements our reputation as the sporting capital of regional NSW, federal member for Page Kevin Hogan said.

‘With the upgrade of Oakes Oval, Lismore already underway, this additional $1.6 million investment will attract sports players from many codes, and their supporters, to the area, which will be great for our local motels, restaurants and cafes.

‘The work is expected to be completed early next year, in plenty of time for Lismore to host the 2018 Men’s Masters Australian Hockey Championships later in the year when 1,800 players and spectators are expected to converge on the northern rivers.

The project will create 76 construction jobs and 16 permanent jobs.