All the news for Wednesday 2 September 2015 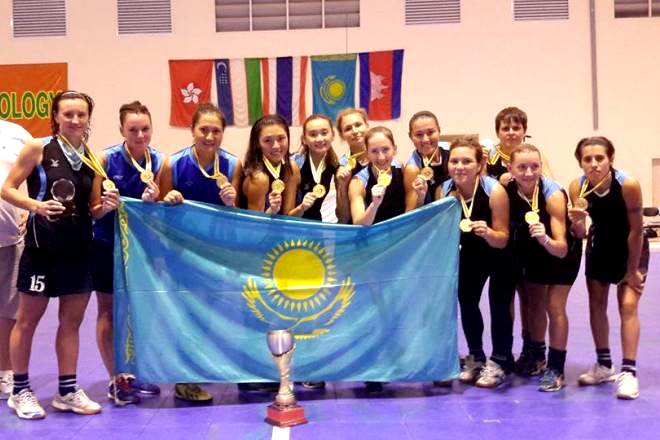 They successfully defended their title against hosts Thailand, Uzbekistan, Hong Kong and Cambodia in the five team event which took place earlier in August.

Thailand picked up the silver medals while Uzbekistan won bronze as they defeated Hong Kong in the bronze medal game.

At the conclusion of the event, all teams were celebrating however. Hong Kong athletes picked up two awards as Chan Yin Ching Tiffany picked up Player of the Tournament and Yip Ting Wai won Goalkeeper of the Tournament, while Cambodia were awarded the Fair Play Trophy. The tournament’s top goal scorer was Natalya Gataulina from Kazakhstan.

The final provided plenty of excitement for spectators in what was a six goal thriller.

Several goals were then scored within quick succession. Kazakhstan captain Natalya Gataulina took advantage of a penalty stroke less than a minute after Thailand's goal. A field goal from Thailand's Kanya Jantapet then followed before Kazakhstan’s Natalya Sazontova levelled the score - all goals coming within a space of two minutes.

At the start of the second half Kazakhstan dominated again, and helped by an advantage in numbers after a yellow card for Thailand’s Kanya Jantapet, Natalya Gataulina scored to put Kazakhstan ahead for the first time in the match.

Back at full strength, Thailand tried their best to stay in the game, but they couldn't score that all important goal to level the game.

Towards the end of the match, Kazakhstan starting pushing back and Irina Dobrioglo extended the lead for Kazakhstan to make it 4-2.

Two goals and a player down after a yellow card for Tikhamporn Sakunpithak, Thailand could not get back in the game before the final whistle, giving Kazakhstan their fourth consecutive Women’s Indoor Asia Cup title.

For more information about this event and all other hockey news from the Asian continent, click here.

Given that it was his first major tournament with the national squad, Brinkman – who moves from Kampong to Bloemendaal this summer – said it was an extra special moment.

“There have been a lot of years without winning a trophy, so to do it this time and win 6-1 in the final is special,” he told reporter Nathan Orr.“We’ve trained so hard to get to this level. And we knew we had to play well today to go on and win the gold medal.”

And now the focus switches to Rio 2016 and potentially unseating Australia and become the world number one.

“Australia are a great team but in every tournament it’s possible that another team can win a trophy. So we’ll see.”

After three rounds of exciting hockey at the SA Men’s Interprovincial Tournament at Tuks Astro in Pretoria, the log leaders in Pools A and Pool B following Wednesday’s fare are South Africa U21 and Tuffy Western Province respectively.

In Wednesday’s late game, Blues shaded KZN Raiders 2-1 after the teams were on level terms at 1-1 at the half-time whistle.

Blues took the lead in the seventh minute via a PC, which was converted by Richard Pautz. Four minutes into the second quarter (19th minute), Raiders equalised with a superbly executed PC.

Jonty Robinson injected the ball from the baseline at considerable pace, Mohammed Mea trapped it neatly at the top of the strike zone and Greg Last finished off in style to make the scoreline 1-1.

Tim Guise-Brown got the winner for Blues from a PC eight minutes (52nd) from the end.

In Pool B, frontrunners WP and Southern Gauteng maintained their 100% success rate.

WP beat a competitive South Gauteng Wits 5-1 after leading 2-0 at half-time. The Capetonians’ goals went to striker Lloyd Norris-Jones (2), Shannon Boucher, Keenan Horne and a magnificent finish by Jason Mulder, while Wits’ Winchester Scott got on the scoresheet four minutes after the changeover.

Eastern Province chalked up their first win with a nail-biting 3-2 triumph over luckless Free State. EP, who led 3-0 after 30 minutes, netted three very good goals from field play by Cerezo Comerasamy, Dalan Philips and Joshua August. Free State fought back in characteristic fashion to convert two penalty corners, the successes coming via the sticks of Jaco Fourie and Kurt Hensburg.

Southern Gauteng, who were untidy in their first two games despite earning full points, showed signs that they are getting their game plan right. The Johannesburgers outplayed a gutsy North West to the tune of 7-0 after leading 5-0 at the interval.

Six of the seven goals were scored from the penalty corner set-piece, with Gareth Heyns in lethal mood, the drag-flick exponent netting a hat-trick. Luke Sanan, Lance Louw and Taylor Dart also found the back of the net off PCs while Nick Spooner scored the lone field goal.

Western Province Peninsula, the defending champs, were involved in a dramatic match with the South Africa U21 combination, the three goals in the match coming in the space of four hectic minutes early in the second quarter.

Tempers flared and threatened to boil over at stages but the SA juniors’ 2-0 lead was good enough for a 2-1 win. All three goals in this intense match came from field play, SA U21 scoring through Stephen McManus and Bili Ntuli. Pens’ Warren McEwan was the Western Cape side’s goalscorer.

In what was something of a surprise in its emphatic outcome, KZN Inland enjoyed a purple patch in the third quarter against KZN Mynahs to rattle up a 6-1 victory, this after the scores were locked 1-1 at half-time.

Meanwhile in the second-tier B Section which is taking place at St Albans College, the first day saw coach Trevor Cormack’s Namibia come back from a 1-0 deficit at half-time to record a 4-2 victory over Northern Cape. Northern Cape’s Desmond de Koker opened the scoring in the 10th minute but once the Windhoek-based lads had settled down, they were dominant.

Northerns B had an Ashley Kemp hat-trick to thank for their 4-0 defeat of SA Country Districts. Northerns B led 1- at half-time, their remaining goal nailed down by Thomas Hobson.

The key match in the B Section, which could well be the most decisive of the competition, features Namibia against Northerns B at 11am Wednesday.

An Inside Look at Wake Forest's Weed Whackers Program

Kids LOVE field Hockey! That’s what we have been finding out for the past 10 years as our Weed Whackers program has increased in popularity and numbers!  But don’t take my word for it, here’s what a few of our Weedies have to say:

“I like when we play games, especially with my friends because we just have fun.  The coaches are nice and fun and they let us chase them!” - Gigi Simon, age 8

“I like when I get to hit the ball and try to get it in the net. And I score!  I also like the girls I play with. Actually, I like my coach because she lets us play in different areas and we don't have to stay in the same place.” - Sophia Griffin, age 6

“Field hockey is fun. You can make new friends and learn how to play. My stick is ready, waiting for February!" - Sarp Ucer, age 9

"The program is set up to teach younger kids the basic fundamentals, like how to hold a stick or dribble a ball, while at the same time allowing them to have fun and be part of something “bigger” than themselves. The older kids participate in more challenging skills, but play a lot of hockey because “that’s what we like!” - Nic Averill, age 10

"While field hockey is unfamiliar to many first timers, the kids love the sport! I mean, c’mon, what kid doesn’t like to hit a ball with a stick and try to get it in a net? It’s innate in their DNA. However, Weed Whackers offers more than just learning the game of hockey, it builds a sense of belonging, creates self-confidence in even the youngest kids (age 4) and teaches them the meaning of teamwork, all in a fun and engaging environment. 'Our mission is to provide young girls and boys the opportunity to have fun and be engaged with our student-athletes. This experience has the ability to ignite the spirit of any young individual.'" - Jen Averill, Wake Forest University Head Coach

And it’s not just the Weedies who look forward to the one-hour session, the coaching staff, student-athletes and the university also get something out of it. While they may be exhausted after a hard practice, it’s all worthwhile when they see the smiles, hear the laughter and get big hugs from the Weedies. The student-athletes quickly realize their responsibility as role models for these kids, and believe me, it is humbling. Additionally, the Weed Whacker program creates a unique opportunity to blend the academic and athletic culture of the university with the community, and vice versa.

The great thing for USA Field Hockey is that, unbeknownst to the Weedies, these kids are pioneers in helping to develop our youth field hockey program. Through programs such as Weed Whackers, the sport itself is becoming more visible, and with the encouragement of coaches and student-athletes like those at Wake Forest, these kids may go on to play high school and college hockey.

Weed Whackers is a free hockey program for youth ages 4-12 years (Pre-K thru 6th grade) that is designed to introduce boys and girls to the sport of field hockey and team play. All sessions are played at Kentner Stadium at Wake Forest University on a weekday for one hour. Participants are divided into groups based on their grade and experience level. Each student-athlete coach has about eight to 10 kids to allow for personal instruction and game play. The first session begins with “Opening Ceremonies” as each team parades onto the field in front of their parents and fellow Weedies. Subsequent sessions include instruction and play, with the last session being a game against the parents and pizza party.

The following link provides great resources for those looking to start a program similar to Weed Whackers in their area: http://maxfieldhockey.com/youth/weedwhackers Rana will make official announcement in this regard at a news conference in Islamabad on Wednesday wherein the new selection committee and management for the national junior team will also be revealed.

As the PHF secretary Rana faced criticism during his 21-month long tenure despite the fact that the performance of the national team which hardly received any financial grant from the government was steadily improving.

But the PHF could not field a well-prepared team for the Olympic qualifiers held in Belgium in June-July this year because of the federal government’s lackluster attitude towards the PHF which resulted in severe shortage of funds the hockey federation had to be faced with.

The federal government even did not honour the national team for playing three back-to-back finals.

Surprisingly, the IPC released the prize money to players for winning a silver medal in the Asiad at a time when the greenshirts were nowhere in the race for Olympics.

Ouster from the Olympics actually paved the way for those wanting to remove the-then PHF president Akhtar Rasool and other officials with the-then chief selector Islahuddin Siddiqi being the first one to resign forthwith while Akhtar Rasool followed suit.

And now Rana has also decided to resign despite the fact he had achieved the vote of confidence from the general body.

Sources further said that Khokhar and the Prime Minister Secretariat wanted their men at the post of secretary with the former wanting someone belonging to the Pakistan army while the new PHF president is in favour of appointing Olympian Shahbaz Senior as PHF secretary.