A hockey prince to a golfing prodigy, India toast GenNext in a COVID-hit 2020

A COVID-ravaged 2020 may have been a tough year for sports, but it didn’t stop a handful of Indian youngsters from making a name for themselves. 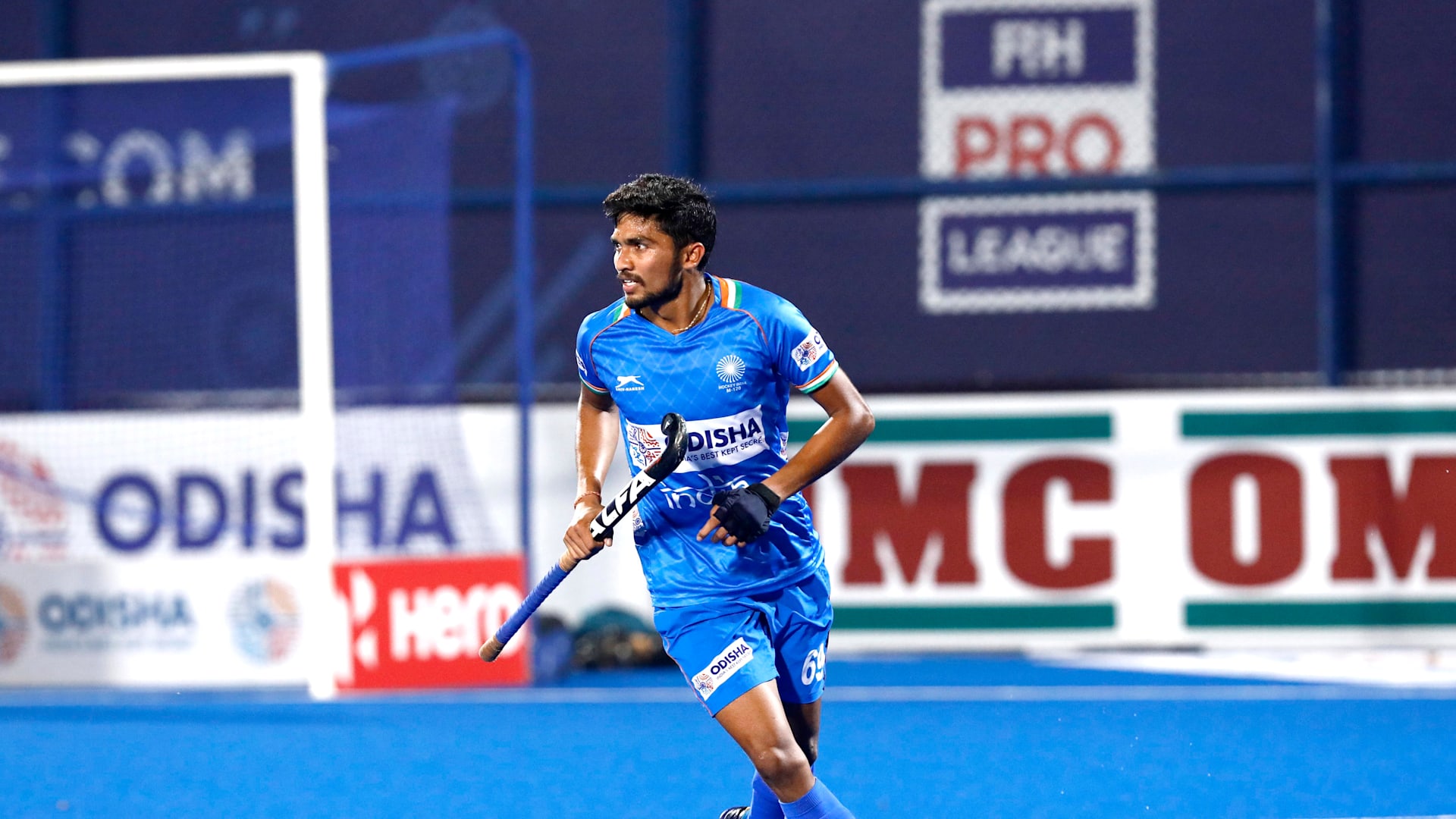 Throughout history, one of sports' biggest draws has been the emergence of young stars with the promise for a sparkling  future.

Every year, sports fans yearn to find the next generation superstars because the new must take over from the old. That's the beauty of sport. But 2020 was a challenging year.

With the COVID-19 pandemic ravaging the world and all sporting activities grinding to a screeching halt, the opportunities for the young to rise and shine have been few and far between.

However, even in these difficult times, a handful of youngsters made the most of whatever was on offer.

Here are the breakout stars from Indian sports in a COVID-hit 2020.

Uttar Pradesh lad Raj Kumar Pal may have been the sole debutant for the senior Indian men’s hockey team in 2020, but India head coach Graham Reid already knows that, in the 22-year-old, he has something special in his hands.

Reid’s belief in the Raj Kumar’s abilities were on show when he opted to hand the youngster his maiden senior cap against reigning European and world champions Belgium in the FIH Pro League on February 8.

Up against the mighty Red Lions, the youngster showed little signs of nerves and put on a stellar display in midfield to help India carve out a memorable 2-1 victory over their illustrious opponents to mark his debut.

Raj Kumar Pal played in each of India’s next three matches and even scored a magnificent brace against former world champions Australia before COVID interrupted the sporting calendar worldwide.

But his pace, dribbling ability and willingness to come to the rescue of the defence line has impressed many.

Despite his brief stay with the senior team, Raj Kumar has already made a case for his inclusion in the upcoming Tokyo Olympics and was included for Indian hockey’s preparatory national camps in Bengaluru.

“My target is to prove myself here so that I can get a chance at the Olympics. I have to give 100 per cent here, and this is my chance to go up. It's just the first step for me,” he told ESPN.

Raj Kumar, in English, means prince and the youngster from the Ghazipur district has already been dubbed as Ghazipur ka Raj Kumar or the Prince of Ghazipur. Only time will tell if he can emerge as the new star of Indian hockey.

With a cupboard full of medals in various international junior and cadet-level tournaments, Anshu Malik was always tipped for big things but 2020 marked the year in which the Haryana-born grappler announced herself on the senior level.

Her defeat in the final came against Nigeria’s Odunayo Adekuoroye – a quarter-finalist at Rio 2016 and a two-time Commonwealth Games champion.

Before the COVID-enforced break, Anshu Malik won a bronze at the Asian Championships 2020 held in New Delhi.

Once wrestling resumed with the Individual World Cup in Belgrade, most Indian wrestlers showed signs of rust but not Anshu. The 19-year-old was the only Indian to win a medal at the event, securing silver after losing to reigning European champion Anastasia Nichita in the final.

Having idolised four-time Olympic champion Icho Kaori of Japan, the youngster will be eager to clinch the open 57kg women’s berth in the Tokyo Games but faces tough competition. Two of India’s top women’s grapplers - Pooja Dhanda, a 2018 world championships bronze medallist, and Sarita Mor, an Asian champion – will also be eyeing the same spot.

But with Anshu’s current hot streak, the Olympic dream looks very much achievable. 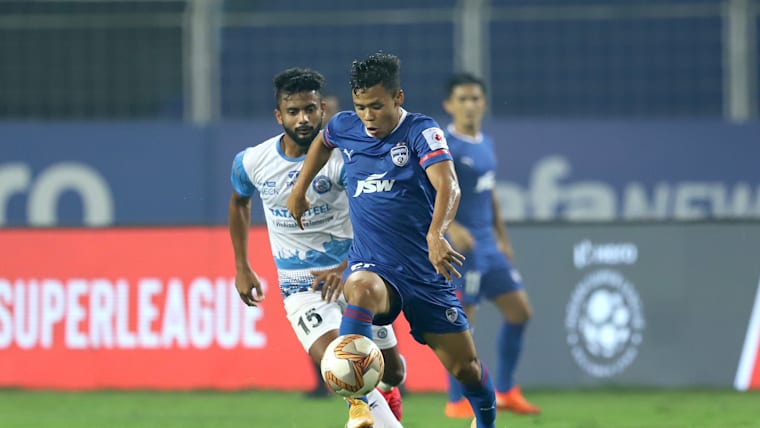 Suresh Singh Wangjam has been one of Bengaluru FC’s standout performers in 2020. Photo: ISL Media

A part of the India squad for the FIFA U-17 World Cup 2017, midfielder Suresh Singh Wangjam chose 2020 as his year.

Having trained in the Indian Arrows setup, the Manipuri was included in the Bengaluru FC squad for Indian Super League (ISL) 2019-20. Wangjam played a few cameos towards the end of 2019 before breaking into Cuadrat’s first XI from January 2020.

The 20-year-old Suresh came to the fore with back-to-back impressive displays for the Blues in the following three months, helping his team reach the semi-finals.

Despite his short frame, the Manipuri has shown the unique ability to shrug off much larger players, including foreigners, in a test of strength.

Added to his uncompromising workrate and ability to drive forward with the ball to help with attacks have earned the box-to-box midfielder some high praise, including comparisons with the playing style of Italian ace Marco Verratti.

Though he lost out on the ISL Emerging Player of the Year award to ATK youngster Sumit Rathi, Wangjam caught everyone’s eyes with his all-round displays.

While Rathi has been struggling for playing time at ATK Mohun Bagan this season after the arrival of Sandesh Jhingan, Wangjam has continued to be a vital piece in Bengaluru FC’s first XI, playing in seven of Bengaluru’s eight matches so far.

Indian football team head coach Igor Stimac is known to be a big admirer of the youngster and it will hardly be a surprise to see him break into the senior national team in 2021. 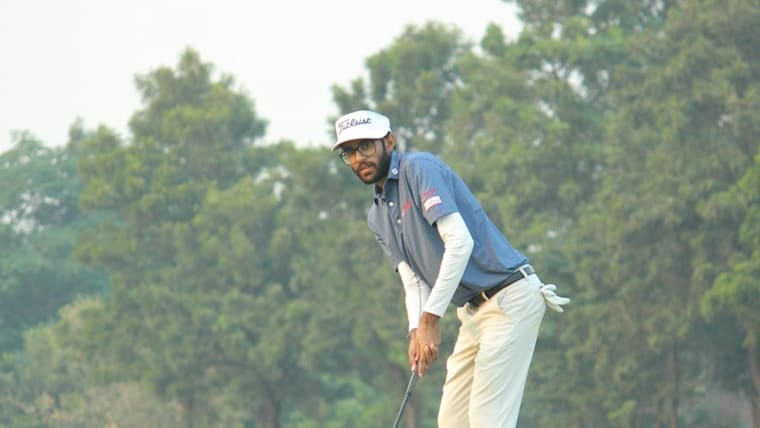 Nephew of ace shooter Abhinav Bindra, the only Indian to have won an individual gold medal at the Olympics, Karandeep Kochhar has been making a name for himself in a different sport – golf.

The 21-year-old Kochhar had a promising 2020. He won the PGTI Players Championship in Chandigarh – his first title as a professional - in November before upsetting some big names like Olympian Anirban Lahiri, four-time European Tour winner SSP Chawrasia, eight-time Asian Tour winner Jyoti Randhawa and Arjuna Awardee Gaganjeet Bhullar to clinch the Jeev Milkha Singh Invitational on the PGTI Tour.

Back in 2016, Kochhar became the youngest golfer, and the only amateur, to win a PGTI title after winning a PGTI Players Championship event at the Tollygunge Club in Kolkata but this year marked his arrival as a pro golfer.

The youngster has already set his eyes on the Olympics as his big goal.

“I've first hand seen how special the Olympics are. It would be special to make it there myself," he says.

Having lit the way through a challenging year, all eyes will be on the youngsters heading into 2021. 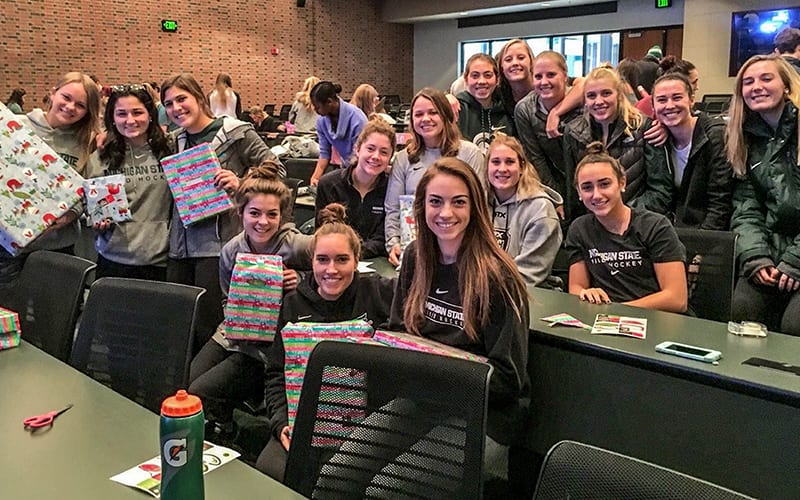 Still, Bonshak found room in her packed schedule for something close to her heart, serving her community.

She has found ways to give back during the pandemic, looking for to help those in need. The entire field hockey team was involved, buying gifts, packing and writing notes for 60 Operation Christmas Child boxes for Athletes in Action.

"We packaged Christmas presents from kids across the world and will soon be helping SAAC (the Student-Athlete Advisory Committee) organize Teams for Toys which is a similar initiative," Bonshak said.

Bonshak's desire to help the community is shared by the MSU field hockey program.

"I feel like every month our team is doing something to help the community," Head Coach Helen Knull said. "They have so many opportunities, and while this year is different, they are still doing things and often Cara is the one spearheading those endeavors."

It is common for students to get involved for a resume builder or to get ready for a career, but Bonshak does it simply because she enjoys it.

"It is just something I enjoy and I love helping others, I am the type that will put others before myself so any way I can help I will do so," she explained. "Being able to give back to the community is something that is a big deal for me. Growing up, my mom instilled in us to give back to our community and my entire family encouraged it."

Bonshak excels as a three-year starter and captain for her team. She was only one of four Spartans to start all 18 games and led the team with seven assists in the 2019 season.

In the classroom, Bonshak, a civil engineering major, was a 2019 Fall Academic All-Big Ten selection and a 2019 Zag Field Hockey/NFHCA National Academic Squad member. In addition, she is a member of SAAC, with a seat on the executive board. She is also a member of the Leadership team with the Diversity and Leadership Committee and is the team lead for Athletes for Hope, an organization that works with student-athletes to provide opportunities to help in the Lansing community.

She really is busy, with a life filled with things she loves.

"In high school, I was basically in every club imaginable and that inspired me to do a lot since each club did something different, whether it was a canned food drive or collecting mittens or stuff like that," Bonshak said. "That was what introduced me into community service, and I knew I wanted to continue that here at MSU."

Bonshak was recognized on her team when she was awarded the Janine Ackerman Award, which exemplifies the traits of leadership, team player and character.

Knull speaks highly of Bonshak's natural leadership since she was a freshman.

"She is mature, sees the bigger picture, is always caring and checks in on teams and coaches," Knull said. "She has grown in the role to become a selfless captain and is exceptional at that within our team and her involvement within other groups on campus."

Bonshak grew up in Whitehall, Pennsylvania and comes from a family of athletes who are just as active in the community as her.

"My siblings were part of SAAC in their collegiate programs and I knew I wanted to follow along in their footsteps there," Bonshak said. "I enjoy being able to step up and be a leader within the athletic department."

Knull credits the Bonshak family as a great example of what a well-rounded student-athlete is like.

"Cara has some awesome role models in her siblings who were also engineering majors and student-athletes in college and both of her parents taught her from a young age what the meaning of hard work is," Knull said. "She very rarely complains and she never says she has too much to do and can't help somebody."

While Bonshak's playing career may come to an end after graduation, she is still looking to stay involved in the field hockey community through volunteering in the future.

"Growing up we always helped with our youth field hockey programs and once I graduate, I kind of plan on going back to Pennsylvania," Bonshak said. "I could definitely see myself going back and being a volunteer for my high school or youth programs. I have some cousins in the programs and would love to give back to them once I get back home."

Knull believes student-athletes at Michigan State seek out opportunities to impact those around and get involved in the community.

"Cara has done a fantastic job of really putting student-athletes on the map as being involved in the community not because they have to but because they want to," she explained. "That is really special about Cara and about Michigan State."