Live streaming on https://fih.live (Geo blocked if there is TV coverage)

Live streaming on https://fih.live (Geo blocked if there is TV coverage)

In the other semi-final, Universiti Kuala Lumpur (UniKL) beat Maybank 5-0 for a 9-1 aggregate win.

UniKL and Terengganu HT will square off for the TNB Cup on Saturday (March 2).

Tenaga started strongly, and it looked like they were ready to reverse the first leg score when Akhimullah Anuar Esook scored off a penalty corner rebound in the 10th minute.

The other Tenaga goal was scored by Faiz Helmi Jali in the 34th minute.

Jang is the tournament’s top-scorer with 21 goals. He also top-scored with 28 goals in the 2017 season.

“It is always nice to help my team win any match but today was special as I managed to score five. In the final, I believe I can contribute at least another two or three goals,” said Jang.“Even though we had a two-goal cushion, we did not take our foot off the pedal, and with Jang in form, we managed to win by a big margin,” said Terengganu HT coach I. Vikneswaran.

National coach Roelant Oltmans said: “Tenaga had their chances and played well, but Terengganu made sure with their penalty corners and that separated both the teams.”

The 5-2 win saw Terengganu qualifying for the final with an 8-3 aggregate at the Tun Razak Stadium yesterday. In the first semi-finals on Tuesday, they won 3-1.

The East Coast side will face league and defending champions Universiti Kuala Lumpur (UniKL) tomorrow at the same venue.

Tenaga, powered by eight national players, needed a big win to book their spot but failed miserably to impress.

The South Korean is sure to win his second top scorer award as he is currently leading with 21 goals.

Jong-hyun was thrilled to bits with his fiery form.

“It feels really great to score five penalty corner goals in a match. I’m also happy that we have qualified for the final,” said Jong-hyun.

Terengganu coach I. Vickneswaran praised Jong-hyun for his superb performance.

“Jang has improved in drag flicks as we have been working on penalty corners during training,” said Vickneswaran.

“To me what is important is to play well and win. We stuck to our game plan and made use of our penalty corners well.”

KUALA LUMPUR: The Malaysian women’s hockey team received a favourable draw in the World Series in Dublin from June 8-16.

Eight teams will feature in the tournament and K. Dharmaraj’s women are drawn in Group A with the Czech Republic, Singapore and hosts Ireland, who were silver medallists in the World Championships in London last year.

Dharmaraj is expecting a strong challenge from Ireland, who were a surprise package in the World Cham-pionships.

“They played exceptionally well to reach the final in the World Champ-ionships. Ireland are ranked eighth in the world and they will be the favourites to win the tournament.

“We’ve never played Czech Republic before and we’re not sure of their strength. They’re three rungs higher than us (Malaysian team) but we have a fighting chance to beat them,” said Dharmaraj.

The Czech Republic are ranked 19th in the world while Malaysia are 22nd.

Singapore are the lowest-ranked team in the tournament at 35th.

The World Series is the qualifying tournament for the 2020 Tokyo Olym-pics.

There are 24 players in the national training squad but national No. 1 goalkeeper Farah Ayuni Yahya is in England, playing for East Grindstead club in the English hockey league.

Farah will return early next month to play in the five friendly matches with the Indian national team here on April 4, 6, 8, 10 and 11 in preparation for the tournament in Dublin.

The Malaysian men’s team also received an easy draw for the World Series, which will be held at the National Stadium in Bukit Jalil from April 26-May 5.

Eight teams will compete and Malaysia are drawn in Group B with China, Brazil and Italy while Canada, Austria, Wales and one more team to be decided later in Group A.

Canada are the highest ranked team in the tournament at world No. 10 followed by Malaysia ranked 13th.

Malaysia are expected to finish in the top two to qualify for the next round of the qualifiers, which will be determined by the International Hockey Federation.

The Investec Girls’ Schools Championships day 3 was another cracking day of Hockey, the weather had taken a darker turn but the hockey was outstanding… and so were the crowds!

Canford School were crowned Champions in the U18 Tier 2 Championships. They narrowly beat Norwich School with a penalty corner in the last play of the match. Queenswood School took the bronze and AKS Lytham claimed 4th.

Our second tournament of the day saw Repton School take the win and the trophy for the U16 Tier 1 Championships but Godolphin & Latymer School fought until the very last second. St Teresas and Dean Close battled it out for bronze but St Teresas dominated the match with a 7-0 win.

The third tournament was the battle for the U18 Tier 1 Championships. Repton School took on Millfield School for the Gold and Wellington battled Trent for the Bronze. Wellington took the lead early and eventually the bronze medal with a 3-0 win. Millfield and Repton battled it right to the end but Repton got a late goal from a penalty corner making the final score 1-0 to Repton School.

The final tournament of the day and the competition was the U16 Tier 2 Championships. Altrincham Grammar fought Queens School, Chester for the cup and Sherborne took on Oundle for Bronze! Sherborne scored an early goal but Oundle scored making 1-1 into half time. The spectators were on the edge of their seat and Oundle scored again making the final score 2-1 and taking the bronze. The gold medal final match saw Queens School, Chester put 5 passed Altrincham but they managed to score before the final whistle blew, making it 5-1. Queens School, Chester took the Gold and the Final Cup of the Investec Girls Schools Championships.

Thank you to all the teams, supporters, officials, Hockey Makers and staff who made the event happen. What an amazing 3 days!

To see all the results and goal scorers head here.

Who's the real loser in incompetent Black Sticks 'bullying' review 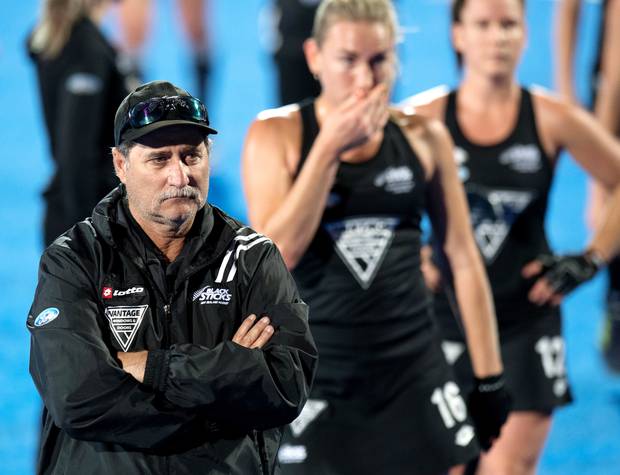 Mark Hager has now been 'promoted' to coach Britain's team.

As far as I can tell it takes quite the talent to make as big a hash of a review as Hockey New Zealand has. They end the week having infuriated just about everyone.

Some players complained about the culture under Mark Hager, the then coach of the women's Black Sticks.

It was a bad year for sport last year,: between hockey, cycling, and women's football codes there was a lot of unrest, upset, complaint - and as a result, reviews. But unlike football and cycling, the complaints at the hockey seemed more vanilla.

Cycling and hockey had very specific allegations and potentially broken rules and regulations. As a result people have walked and been pushed.

Hockey seemed to have some players who thought Hager was too tough - hardly a crime at elite level sport. But then he had just as many supporters saying how good he was.

So was he a bully or a success story? There were no tangible allegations, broken rules, or breaches of laws, just a general misery around approach.

The other two sports investigated, reacted and moved on. Hockey dragged, dragged, and dragged until this week we finally got the result. Well, when I say result, we got a couple of glossed over headlines that totalled three pages.

The full report, which was heavily redacted, went to the heavyweights, and people like Sir Owen Glenn, the sport's biggest individual backer.

We got an apology from the administrators to the players for, well, we still really don't know. The vibe? The mood? The lack of taking stuff seriously? It's all so hopelessly vague we are no better off.

But in the ensuing period the lawyer who did the report has vanished, was not there this week to answer questions - and the players are furious the detail hasn't been published.

High Performance Sport is furious, the players' union is furious, Sir Owen Glenn is ropeable and has suspended his money.

There isn't a single person in all of this that looks, sounds, and acts remotely happy as a result of months worth of angsting and hand-wringing.

Meantime Mark Hager is off to Britain to coach one of the best sides in the world, essentially having been promoted. So what has been achieved? Is anyone here a winner?

And all of this took longer than the other sports, and got a worse result. That's the trouble with incompetence at the top. They stay, and the real talent (the coach) is gone.

So who's the real loser?