We are on right track for Rio Olympics: Sardar Singh

NEW DELHI: Indian hockey captain Sardar Singh said that his team has been improving in the last two years and is on right track to make amends of the 2012 London Olympics debacle in Rio Games later this year.

Indian men's hockey team finished 12th and last in the London Olympics but Sardar said that the team would produce a vastly improved show this time in Rio.

"After winning the gold in 2014 Asian Games, the team has improved a lot in the last one and half years. This time in Rio, we will do a lot better than our disappointing show in London," Sardar said at the sidelines of an event to announce Bollywood superstar Salman Khan as Goodwill Ambassador of the Indian contingent at Rio Olympics.

"Our target is to win a medal in Rio. In any case, you will see a vastly improved show in Rio," he said.

Asked about the preparations of the team in the run-up to Rio, Sardar said, "We are on the right track as far as preparations are concerned. We are getting the international matches also. The national camp is beginning from Sunday again after a gap and the coach and management are working to rectify whatever chinks and drawbacks we have in the team before Rio.

"We had an experimental team in Sultan Azlan Shah Cup and we had a good show there considering that the team was not full strength. We will get the last chance to rectify our chinks during the Champions Trophy in London in June," he added.

"The (2014) Asian Games gold was the beginning of a process in Indian men's hockey and I just hope that we get the desired results in Rio," said Sardar, considered one of the best players in the world currently.

Sardar was embroiled in a controversy in February after an assault case was filed by a 21-year-old British woman against him but he said he has left it behind and his sole focus is on hockey now.

Asked if he has any disappointments still lingering on field or off it, Sardar said, "I want to concentrate on this which I can do and I am not worried about something which I can control. My focus is on hockey only and the team's performance in Rio." 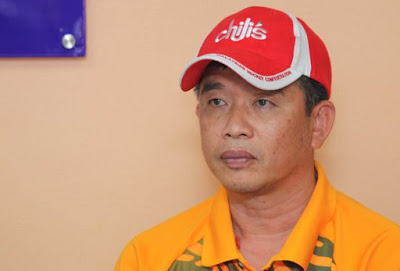 THE Kuala Lumpur 1MAS programme is in a big mess, because of miss-information among parents, KL officials and director Tai Beng Hai.

Kuala Lumpur HA suspended their 1MAS Boys' programe in February without informing Beng Hai, and it has since spiralled in an all-out 'war' among the stake holders -- namely parents who are anxious to know if their children can play in the Under-13 tournament on May 7.

"This issue has been blown out of proportion because of misunderstanding, and for starters, KLHA stopped the boys programme without informing 1MAS," said Beng Hai.

KLHA's have their own reason, and according to their secretary V. Rajamanickam not more than nine boys attend training at any one of their sessions.

"We had to suspend the boys 1MAS programme because of lack of attendance. At ony one time, only about nine under-13 boys turn up for the training under coaches K. Embaraj, S. Selvaraju and S. Bubalan.

"So, we decided to suspend the programme, and are in the midst of trying to re-vamp it. The girls section has no problems because they attract a large number of trainees," said Rajamanickam.

Beng Hai met with KLHA development chairman Datuk N. Sri Shanmuganathan yesterday to clear the air, and it looks like the KL boys will not be victims of misunderstanding.

"I had a meeting with Sri Shan today (yesterday) and he is in the midst of getting new coaches to revamp their 1MAS programme because some of the previous coaches like K. Rajan and Selvaraju left because of other commitments.

"In the end, to clear the mess of misinformation, I would like to assure parents that their children can still play in the 1MAS under-13 tournament and all we need is a list of players from KLHA so that we can buy insurance, and they will be allowed to play in the tournament.

"The 1MAS programme is to develop grassroots, and rest assured, players will not be victimised because of misinformation, or any other external issues.

"As long as the states send us a list of their players, we will accommodate them in tournaments and other zonal programmes," said Beng Hai.

Beng Hai is expected to meet Rajamanickam on Monday to clear the air further.

Malaysian National hockey teams to play in Japan in June

KUALA LUMPUR: The national men’s hockey team’s next assignment will be a six-match tour of Japan from June 8-15.

Two of those matches will be official Test games.

The team will resume training on May 3. They will break camp on May 13 to allow the players to rejoin their state teams in preparation for the Razak Cup tournament from May 20-30.

“The men will play their matches in Kakamigahara while the women’s team will play the Japanese National Juniors in the Yamanashi prefecture,” he said.

The men and women’s teams will re-assemble after the Razak Cup competition.

Logan said that the MHC had bid to host the Asian Champions Trophy and are awaiting official word from the Asian Hockey Federation (AHF).

“We expect to get the nod soon,” he said.

KUALA LUMPUR: Japan will make their debut in the Sultan of Johor Cup hockey tournament this year.

The Japanese team have confirmed their participation after being invited to replace two-time champions India, who have withdrawn from the tournament.

India, who have taken part in all five editions of the tournament, withdrew last week despite having confirmed their participation a month earlier. No reason was given for their withdrawal.

The six-nation tournament will be held in Johor Baru from Oct 31-Nov 6. The other confirmed teams are Malaysia, defending champions England, Australia, New Zealand and Pakistan.

All the teams at the Sultan of Johor Cup, except for Malaysia, have qualified for the Junior World Cup in India in December.

Malaysia failed to make the cut after losing in the Junior Asia Cup last year.

Hockey teams from the Perse School have dominated county competition with victory in three age groups for both boys' and girls' competitions.

All of the teams progressed to the East Tournament but unfortunately none of them made it through to the regional finals.

Jon Peckett, head of hockey at the school, said: "Our pupils relish the opportunity of competing in their teams at all levels of the sport.

"We have close to 50 teams representing the school and nearly 500 fixtures are played through the course of the year.

"It has been a pleasure to work with the pupils who have shown excellent commitment to achieve these successes, and I thank the staff who are dedicated to delivering a thriving hockey programme."

Meanwhile, Year 12 student Tess Howard, who plays for the school's under-18 team, is in the England under-18 squad and is hoping to be selected for the European Champiosnhips this summer.

Akhter and Harrison are also in the Advanced Apprenticeship in Sporting Excellence programme.

The Ulster hockey fraternity has been shocked at the death of a popular figure in south Down.

John Charleton had been a member of Kilkeel Hockey Club for 45 years and was an ever-present supporter of everything that the club was involved in.

It is understood Mr Charleton - who lived at Mountain Road in the town - died suddenly on Friday.

On Saturday, club president John Bird said it had been “an unbelievable couple of days.”

He said: “The hole this will leave in the hockey club we can not imagine.”

In a tribute to his friend and fellow club member, Mr Bird said: “It is with deep regret and sadness that Kilkeel Hockey Club are writing this.

“The club members would like to extend their heart held and heart felt sympathy to the family circle of Mr John Charleton on his untimely passing.

“John was a lifetime member of KHC for 45 years, an ever present sight on the sideline or in the dugout and always cheering on the teams.

“He never failed on his match reports and dedication to both the club and its members. The entire club is devastated at this sad news.”

Mr Bird added: “He will be sorely missed by everyone and a hockey game for Kilkeel will never be the same without him.

Mr Charleton’s funeral will be from his brother David’s home at 7 Ballymartin Village, Kilkeel on Sunday at 2.30 pm, before a service in Christ Church, Kilkeel.