Victory was especially sweet for the Spar South Africa women’s indoor hockey team when they overturned a shock defeat to Namibia in the last round-robin match Thursday night to storm back with a 6-0 victory after leading 4-0 at half-time in Friday’s Spar Four Nations final.

A great ball off the left sideboard from deep by Amore de West was deftly buried into the backboard by Shelly Higgo to put SA 1-0 up after 10 minutes.

The vociferous home crowd exploded in the 12th minute when local favourite Jess O’Connor made an intercept before passing the turnover ball to Kara Stella who netted her team’s second goal.

It was the irrepressible O’Connor once again to make the assist, with Amy Greaves delivering a well-placed shot just inside the far post. At three goals to the good, the South Africans had left the Namibia line-up with an enormous task if they hoped the turn the tide.

But South Africa were not finished yet. The alert Jess Glass snapped up a chance to set fellow striker Megan Robertson free and it was 4-0 after 17 minutes.

The emotion of the shock 3-2 win over SA Thursday night appeared to have drained Namibia but they were still working very hard to get back into this final.

Six minutes after the changeover it was Robertson’s turn to make the play, and Shelly Higgo steered the ball into the net for SA to lead 5-0.

SA were threading a number of great combination plays together, using the full area of the court, and it was Celia Evans, the SA skipper, who crossed from the right channel to Kara Stella, the ball leading to the unstoppable Meg Robertson to score again for the 6-0 final scoreline.

Australia beat the USA 3-1 to win the bronze medal.

Cape Town - The stand-off between SASCOC and SA Hockey is over, and there will be no South African representation in the sport at next year's Rio Olympics.

South Africa have had hockey representation at every Olympics since 1996, but this year SASCOC has decided that they won't be sending a side to Brazil in 2016.

The decision sparked an outcry from the hockey community, who hoped that both sides had done enough to secure participation at the Olympics by winning the African Championships.

But SASCOC chose not to consider the continental qualification route this time around.

SA Hockey CEO Marissa Langeni has expressed her disappointment at the IOC backing SASCOC's decision after SA Hockey, through the International Hockey Federation, had appealed the ruling.

"The teams both finished as African champions after quite hectic tournaments. So from a team perspective I can tell you that my players are absolutely deflated," she said.

"SASCOC was not happy with the continental route even though we did qualify through that avenue."

And while it is gut-wrenching for the players not to be on the plane to Rio, a look at South Africa's performances at the Olympics suggests that they are not medal contenders.

"I understand that SASCOC is looking for excellence and looking for medal hopefuls, but not every athlete in this country is going to be a medal contender," said Langeni.

The SA Women's Sevens side has also felt SASCOC's wrath, and they will not be sent to Rio despite qualifying for the Games through being crowned African champions. Instead, Kenya will represent Africa on the rugby field. 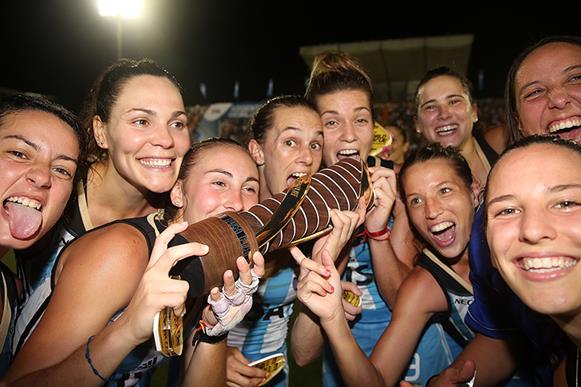 The International Hockey Federation (FIH) has released the latest World Rankings following the conclusion of the 2015 Hockey World League Finals.

There is no change in the men’s top three nations, with Netherlands ranked second and Germany third. With England (and Great Britain) remaining in fourth, Belgium leapfrogged Argentina (6) and India (7) into fifth place as they finished runners up at the Hero Hockey World League Final in Raipur, India, earlier this month.

The rankings were confirmed following the conclusion of the women’s Argentina Hockey World League Final in Rosario last Sunday.

The next update to the FIH World Rankings will be published following the Champions Trophies in 2016. The men’s event will be held at a location to be confirmed in Argentina between 11-19 June while the women’s event will take place in London, England between 18-26 June.

For a complete guide to the FIH World Rankings click here.

India drop a place to 7th in latest FIH rankings

NEW DELHI: The bronze medal in the recently-held Hockey World League (HWL) Final notwithstanding, India dropped a place to the seventh position in the latest International Hockey Federation (FIH) for men.

Only last month, the Indian men's hockey team jumped two places to occupy sixth place in the the FIH rankings on the back of its good showing in the the Hockey World League Semi-Finals. World champions Australia, the winners of HWL Final in Raipur earlier this month, continue to occupy the top spot ahead of second placed Netherlands and Germany.

With England (Great Britain) remaining in fourth, Belgium leapfrogged Argentina (6) and India into fifth place as they finished runners up at the HWL Final in Raipur.

New Zealand occupy the eighth spot, followed by Korea and Pakistan to complete the top 10 positions. Meanwhile in the women's section, Olympic and World champions Netherlands remain at the top of the rankings followed by Argentina and Australia.

Telkom Orange are one victory away from an historic eighth continental hockey crown.

Telkom, who play Ghana Police Saturday in the final of this year’s Africa Hockey Club Championship in Lusaka, reached the final unbeaten.

Orange take on the Ghanaians Saturday afternoon as they bid to lift a record eighth title in the clash set for 2.30 pm Kenyan time at the Olympic Youth Development Centre Stadium.

This will be the second meeting between the sides after their 3-3 draw in their first preliminary match as the curtain comes down on the week-long championship.

Orange eliminated Ghana Revenue Authority (GRA) 2-0 in the semi-final on Thursday to reach their fourth successive final, while Ghana Police thrashed Sharkia from Egypt 6-1 to reach their maiden final.

Police finished ahead of Orange in Pool ‘A’ with a superior goal difference after both teams tied on four points.

The Kenyan champions displayed their best performance in the tournament so far, dumping out GRA. On Saturday, they will be looking to repeat that performance to see off the law enforcers who thrice came from behind to hold Orange 3-3 in their first encounter.

Orange coach Jos Openda is expected to retain the starting 11 who won in the semi-final match against GRA. Josephine Ataro is likely to start in goal ahead of first-choice goalkeeper Ruth Njoki who was in goal during the three-all stalemate.

Openda expects a physical encounter but believes his charges have finally hit top form going into the match.

“When we faced them (Ghana Police) in the first game, we did not know what to expect and they caught us by surprise. We have now done our homework. We are prepared for any eventuality against them,” Openda told Saturday Nation Sport on phone from Lusaka.

Veteran striker Jackline Mwangi, who scored a hat-trick against Ghana Police, will lead Orange’s attack as she looks to add to her tally in the competition.

Mwangi is Orange’s top scorer at the annual event with four goals, while captain Betsy Ommala, Barbara Simiyu and Maureen Okumu have each scored once for Openda’s team.

Police coach Eric Obaya could also name the same side that thrashed Sharkia in the semi-final, with Ghana international Martha Sarfoa who scored thrice against Orange leading the team’s attack.

The men’s final will be an all-Egypt affair between champions Sharkia and Eastern Company.

Tikaram Thakulla’s dream of making it big in hockey, thanks to the support lent by Tony Fernandes, popularly known as Uncle Tony in Mumbai hockey circles. —PHOTOS: PRASHANT NAKWE

A support system is falling in place for Mumbai schoolboy Tikaram Thakulla from Nepal, studying at Our Lady of Dolours School, Marine Lines and playing club-level hockey in the Mumbai Hockey League. His dream of representing India men’s squad in future, despite financial limitations at home forcing father Gopal trying to make ends meet doing double shifts as security guard, was projected in an article titled ‘Tikaram Grabs Hockey Helpline’ in The Hindu Mumbai edition on November 30.

India defender Devinder Walmiki, the youngster’s senior at Bombay Republicans Club which offers match opportunities for talented Mumbai amateurs and youngsters, posted the link on the club Facebook page. The Hindu article has reference to Tikaram, a Standard X student, receiving his first hockey stick needed to play on artificial turf from Walmiki, also a resident of Marine Lines and a drag-flicker.

The Facebook link was read by Mumbai-born hockey professional and entrepreneur Ashley Fernandes, in Lyon, France. Walmiki was contacted in India and Tikaram was chosen for the Tony J Fernandes Award by Ashley, a French men’s hockey international and founder of a NGO (www.playandstudy.com). Fernandes Sr, Tony, is a reputed hockey coach at Lyon and has trained international like Jude Felix, Dhanraj Pillay, Shakeel Ahmed, Harender Singh and Gavin Ferreira in France. Tony met Tikaram at the Mahindra stadium during the MHA League, in Walmiki’s presence.

Uncle Tony, as he is fondly known in Mumbai hockey fraternity and his residential locality in Bandra, revealed that the award, funded by the Fenandes family, will take care of Tikaram’s hockey kit and diet supplements required for a hockey career.

In an email to The Hindu from Lyon, Ashley elaborated the details: “A complete hockey kit, and his supplements will be taken care of (as per Devinder’s recommendation). A follow-up next year to assess his performance on and off the field with the possibility to renew the award. Tap into the Play & Study network (former Indian hockey players who came to France) for help in charting his career on and off the field.”

Ashley adds: “Actually this award is just a modest contribution to help players understand the difference between great and good and ultimately open up their minds.”

He explains Play and Study reasoning: “Children’s play is an act of freedom, sometimes the only rare moment away from every day’s heavy burden. In his/her play, the child stretches the limits, goes beyond, recreates and renews his/her world,” he says, referring to himself a philanthropist, entrepreneur, developer and investor.

“Later in sport, the act of playing is disciplined but if the child in the player is able to keep his/her passion, then genius is at work. Look at the great stars, passion is still alive, they are hungry, high on life and it shows! Study is planning for the future and a necessary investment. Knowledge helps you understand the stakes and puts you in a position to choose, and choice is freedom! We believe players can be turned into achievers.”

Tikaram is busy preparing for SSC exams, a crucial point for a schoolboy. Fortunately for him, on the hockey turf, he has always played in older age groups. In the MHA League, the defender is learning lessons the hard way, pitted against forwards looking for the fastest route to goal. The boy blocking their path does not interest them. For the city lad, these hard knocks and bruises are tools to survive on the long road ahead. The Tony J Fernandes Award is on the way, a spring in his step when he steps on the hockey turf next time.