Who will dance the last tango in Buenos Aires? 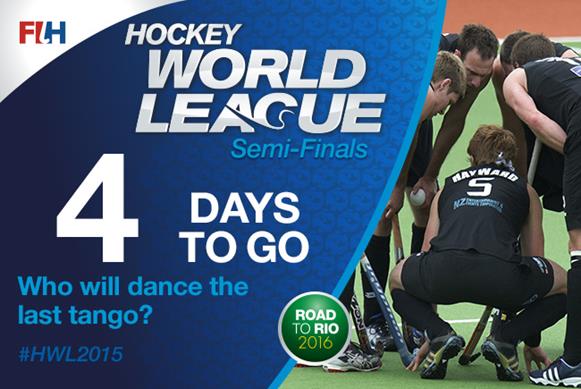 Can Los Leones thrill the home crowds? Might Canada prove they ‘can-do? Or will it be a European affair? It’s a wide open contest in Argentina.

With Australia contesting the other Men’s World League Semi-Final in Belgium, the fight is on in Buenos Aires between the nations who are queuing behind the number one ranked team to attempt to knock the Kookaburras from their perch.

Leading the charge is the Netherlands, a team desperate to return to winning ways after finishing in silver medal position in both the Olympics and the World Cup. The Netherlands is the defending champion of the Hockey World League, but the team, led by FIH Coach of the Year Max Caldas, will want to secure both its passage to the World League Final and a place at Rio 2016.

Breathing over the Oranje shoulders is Germany. Ranked three in the world, reigning Olympic Champions and 2014 Champions Trophy winners, the team led by charismatic coach, Marcus Weise, will be seeking to stamp their authority in Buenos Aires and have a wealth of talent at their disposal to make that happen.

But it is the middle-ranking teams that will be out to upset the world ranking order. The hockey-mad Argentine crowds will be willing their home side to victory, and as Los Leones so ably demonstrated in the World Cup, they are a bunch of players with enormous belief and in Carlos Retegui, they have a coach who exudes so much passion from the sideline he can will a team to victory.

New Zealand and Korea are both teams with the capability to win matches. New Zealand come to Buenos Aires with a side packed with experience, and a huge desire to take a medal home. They also know this is their best chance to qualify for Rio 2016, as they have yet to beat Australia in the continental championships, the Oceania Cup.

Spain and Canada meet on the opening day of the Semi-Final, and this will be an important fixture for both teams as they look to get their campaigns off to a winning start. Ranked 11 and 15 respectively, these are two teams who could beat anyone on their day, but three points will give either team a strong platform from which to mount an attack.

Japan come into the Semi-Finals on the back of a 3-1 series loss to India. With Tokyo 2020 on the horizon, Japan will be looking to peak in five years time, and this event, plus the opportunity to compete in the World League Final will be a big motivational factor. The Japan team’s form in recent competitions does not make for happy reading, but this is a wide-open competition.

Finally, the two lowest ranked teams in Buenos Aires are Egypt and Austria. The two teams are the epitome of what the Hockey World League is all about. Ranked 20 and 22 respectively, the teams have made their way through Round One and Two and are now in a position to compete against the best hockey players in the world. Sport doesn’t get much better than this.

Hockey Haryana overcame a spirited Hockey Gangpur Odisha side and registered a hard-fought 2-0 win to enter the semi-finals of the 5th Hockey India sub-junior women national championship being held at Ranchi.

Looking to secure a place in the semi-finals, both the teams went all attacking from the start. However, it was the Haryana team who enjoyed a superb start and soon took the lead in the sixth minute.

They were awarded a penalty in the sixth minute which was successfully converted by skipper Jyoti.
High on confidence after taking the lead, the Haryana side continued to pile pressure on the Gangpur-Odisha team.

Despite numerous attempts, they failed to double the lead as the Hockey Gangpur Odisha defenders produced a solid performance and were almost impenetrable.

After the break, both the teams looked forward to consolidate their position in the match. While the Haryana team tried to double their lead, the Hockey Gangpur Odisha team made attempts to reduce the margin and score the equalising goal.

In another match, Hockey Andhra Pradesh produced a clinical performance to beat Chhattisgarh Hockey 4-1. Hockey Andhra Pradesh made constant forays into the rival area and their star player, Maheswari Balagonda, opened the account in the 11th minute. However, their joy was shortlived as Chhattisgarh Hockey’s Anjali Mahto perfectly placed the ball into the net and scored a superb leveller in the 16th minute.

Maheswari Balagonda then struck a brace in the 25th and 31st minutes to take the score to 3-1 before the break. The second half of the game saw Andhra Pradesh add another goal to their tally through Varalakshmi Uippili, who struck a field goal in the 40th minute.

Unable to add any further goals to their account, Chhattisgarh Hockey lost 1-4.
In the third match, Hockey Odisha outplayed Delhi Hockey 4-0 as they ride on Elima Minz’s spectacular hat-trick.

Hockey Odisha dominated the match from the first minute as Elima opened the account in the 25th minute.

Elima once again led from the front and scored two more goals in 43rd and 44thminutes, taking the score to 3-0. In the 60th minute, Ashim Kanchan extended the lead when she scored the fourth goal.

Going to the business end of the tournament the young boys displayed some brilliant hockey to firm up their position for the title clash in the inaugural Prof. Joe Ezekiel Inter-School Hockey Cup 2015 being played at Shivaji Stadium in New Delhi.

With some extraordinarily gifted lads in the line up, Sarvodaya Bal Vidyalaya, Ashok Nagar took its appointed place in the final to set up title clash against Citizen Hockey XI, whom they beat 0-2 in the league stage.

undefined Today’s first game saw Government Boys Senior Secondary School (GBSSS) Mahrauli pulled off a fine win against the GBSSS Saket by 2-0 margin. In the second game of the day Sarvodaya Bal Vidylaya-Ashok Nagar got better of OTHL XI 5-0 to register a thrilling win over the host and qualified for the all important final.

In the third and the last game, Citizen XI outclass Sarvodaya Bal Vidyalaya Bankner 4-1 as the winning side also made their way through the finals. Citizen XI were easily the better team as they maintained aggressive play throughout to show complete dominance in the game.

The other top contender VC Agri Sr Sec school, which was leading 8-2 against OTHL XI, had to bow out of the tournament as the match was cancelled due to team management's mibehaviour with the officiating umpire.

Later, the Organizing Committee decided to scratch both them teams from the tournament, giving a point to the pending match between SBV Bankner and OTHL XI.

The final of the the Prof. Joe Ezekiel Inter-School Hockey Cup 2015 will be played today between Sarvodaya Bal Vidyalaya-Ashok Nagar and Citizen XI at the Shivaji Stadium in New Delhi from 4.30 pm. The 8-team event is the idea of Gulu Eziekiel, son of late Prof Joe Eziekiel, who is also noted sports historian and author of many sports books.

The Inter-school Cup is organized by the Delhi based NGO, Hockey Citizen Group, which runs the universally popular One Thousand Hockey Legs project in five cities of India. 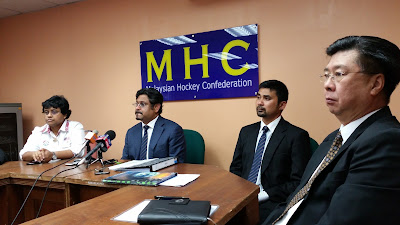 MALAYSIAN Hockey Confederation (MHC) president Datuk Seri Subahan Kamal yesterday set the standard for his Executive Board (EB) when a payout of RM282,000 was made to the men's and women's teams.

The money was bonuses as well as training allowances owed to the players from 2013, 14 and 15.

And now, his EB will work to repay the RM2.7m owed to various debtors.

"The EB has agreed and endorsed the various committee chairmen today (yesterday) and they have one year to deliver on their KPI, after which a review will be done.

"We have paid money owed to players (men and women) since 2013 and now I give myself six months to clear the RM2.7 million debt and start afresh," said Subahan.

Subahan will chair the Finance and National Team management Committees: "I want to chair these two committees as they have big responsibilities. One is to clear our debts, and the other to see that Malaysian men and women start with golds at the Singapore Sea Games and then the men qualify for the Rio de Janeiro Olympics.

"It is important to stamp our domination in South East Asia again, while I am also fairly confident that the men will not dissapoint at the Belgium World League Semi-finals and give their best to earn a ticket to the Olympics.

"Although this EB is only weeks old, still, we will give the present national team all the help they can get to qualify for Rio de Janeiro. After this we will work towards having a team at the 2020 Olympics as well," said Subahan.

Men's deputy president George Koshy will head the Competitions Committee: "With his vast experience in running a Malaysia Hockey League team Goorge is the best in this department. To avoid a conflict of interest, he will release his position as president of Kuala Lumpur Hockey Club soon," said Subahan.

One thing for sure, there were smiles all-round when players and officials went up to collect their envelopes from Subahan.

"Now that match bonuses and allowances has been settled, I hope the players deliver on the pitch."

The newly appointed chairmen have one week to submit a list of their members and start working towards their KPIs.

The total amount paid by the Malaysian Hockey Confederation (MHC) to the men’s and women’s team came to RM282,000.

MHC president Datuk Seri Subahan Kamal said they had given the national teams priority as they are off to two big tournaments.

The men will be heading to Belgium for the World League Semi-final from June 20-July 5 while the women will be competing in the SEA Games from June 5-15.

“We have just taken over the MHC two and a half weeks ago and I said have that we will look at settling whatever debts we had. I’m glad that we have paid the players. Hopefully it will ease their minds as they head for the two major events.

“Let me assure the players that they can expect some bonuses when they do well. The rewards will come with success,” he said after chairing the second executive board meeting at the National Hockey Stadium in Bukit jalil.

“We still have around RM2.7mil in debts. But we are working on it. I give myself six months to become debt free and start afresh,” he added.

MHC also finalised their chairmen for the various sub-committees.

Subahan will chair the finance and national team management committees.

“I want to chair these two committees as they have big responsibilities. And one of them is of course is to clear our debts.

“I have also decided that all the chairmen will serve for a one year period after which I will review their positions.”

Deputy president George Koshy will head the competitions committee while the women’s deputy president Professor S. Shamala has been given the development portfolio.

The newly appointed chairmen have one week to submit a list of their members and start working towards their KPIs.