The South Africa men's hockey team dominated Austria in the hotly-contested third Test match at Queensmead in Durban Thursday night but once again their finishing let them down and the Europeans snatched a 2-1 victory.

SA opened the scoring in the 14th minute through a superb Shannon Boucher flick from a penalty corner (PC) variation while Austria’s goals came via a Florian Steyrer PC in the 30th with Michael Minar nailing the winner in the 46th.

The result means Austria have clinched the series 2-0 with one Test match still to play. The first Test was drawn 1-1 while Austria won the second Test 4-3. The fourth and final Test will take place at 1pm Friday due to flight changes, and not 2pm as was originally scheduled.

And despite the series already having been decided, this SA team - with more than a dozen new caps - owe it to themselves to end this thrilling week of international hockey on the winning side. A further incentive is that it would be a great way to honour South Africa’s Sheila Brown, who was Thursday named tournament director of the Rio 2016 Olympic Games hockey event.

The third Test was an exhilarating contest from the outset, SA’s Richard Pautz getting a half-chance before some superb stickwork by Andrew Manson set Pautz up for what would have been a brilliant goal. In the 13th minute Austria’s Patrick Schmidt shook off tackles to win a penalty corner but Matthias Podpera couldn’t get enough purchase on his drag-flick.

SA broke away, ultimately winning a PC, the variation left resulting in Boucher spearing a beautifully timed flick past goalkeeper Mateusz Szymczyk that threatened to burst the net for a 1-0 lead to the men in green and gold in the 14th minute. The goal came with just one minute left in the first chukka, hockey now being played in four 15-minute chukkas.

Into the second chukka and SA were immediately on the attack, Austrian defender Fabian Zeidler showing immaculate composure and skill to deny a dangerous offensive – and that was not the end of it as the Europeans broke away to set up what appeared to be a certain goal for Pit Rudofsky but SA captain for the day Jethro Eustice dived full length to effect a remarkable save centimetres from the goalline.

The end-to-end action did not let up and captain in the first two Tests - SA’s most experienced player in a very inexperienced, untried side, Jonty Robinson, came agonisingly close to getting on the scoresheet.

The Austrians were feeling the pressure and SA were again within sight of extending their 1-0 advantage, but as so often has happened in this series the Europeans - at full-strength on this tour - came away, won a PC and Steyrer steered the equaliser into the backboard with just 20 seconds of the second chukka left (1-1 in the 30th minute).

The cut-and-thrust continued until Austria worked hard to win a PC with five minutes left of the third chukka but Robinson and Robin Jones did superbly to clear the danger. SA broke out within a second and replacement Austria keeper Ben Melic showed great presence of mind to foil a first-rate scoring opportunity.

Not minutes later SA again came within a whisker of scoring as Austria battled to get out of their defensive third, but the visitors were not done yet and Eustice was again on hand to clear the threat at the other end.

Disaster struck SA one minute into the fourth and final chukka when Minar found the time and space to set his base before lashing a shot into the net (2-1 in the 46th minute).

Tempers flared shortly after, as the tension mounted, and SA were down to 10 men for a time, but the mood improved when a flying Brandon Panther was not far off from levelling the scores.

With five minutes left in the match the SA players combined brilliantly on attack and appeared absolutely certain to score but once again the Austrians managed to survive. As the clock ticked down, tempers threatened to get totally out of control near the subs’ bench and in the dying seconds SA were once again achingly close to equalising, only to be denied.

FIH announce the Technical Delegates for the 2016 Rio Olympic Games 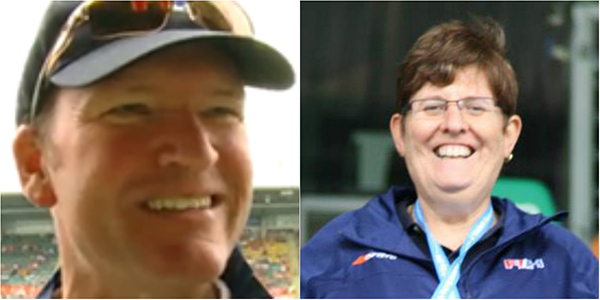 With the 2016 Rio Olympic Games just over 18 months away, the FIH is pleased to announce its Technical Delegates for both the men’s and women’s hockey events.

Jason McCracken from New Zealand and Sheila Brown from South Africa, have accepted their appointments to head the men’s and women’s events, respectively. Both will bring vast hockey experience to the Games.

Jason will come to Rio with one Olympic Games already under his belt having served as an Assistant Technical Delegate in London at the 2012 Olympic Games.   Jason also has Olympic experience as an Umpire, before he followed the officiating route.  To date, his officiating career, includes the 2010 and 2012 Champions Trophy and the 2014 Hockey World Cup.

Jason said: "I am delighted to be given the opportunity to be the men's hockey Technical Delegate for the first Olympic Games in South America. Our team of Umpires, Officials and FIH management will aim to create a fantastic environment for the players to perform at the highest level and produce a spectacular Olympic Games.”

For Sheila, the Rio Games will be her second Olympic experience as an FIH event official. In 2012, she was also an Assistant Technical Delegate at the London Olympics. Sheila has worked at two World Cups, as a TD, 2010 in Rosario, Argentina, and again in 2014 in The Hague.

Sheila is equally delighted at the appointment: ”I am privileged to be appointed to such an awesome event. Just like any athlete who competes at the Olympic Games, for us as Technical Delegates, it is the greatest honour that can be bestowed on you. “

As the Technical Delegates at the 2016 Rio Olympic Games, Jason and Sheila will be the authority for all things competition related.

Further appointments for Rio will be announced later this year on fih.ch and on the FIH Facebook and twitter pages.

No friendly against Singapore for Malaysia hockey

KUALA LUMPUR: Malaysia’s hopes of playing a friendly against Singapore prior to the start of the World Hockey League Round Two has been scuppered by the withdrawal of Fiji from the tournament.

World No. 35 Mexico have replaced Fiji, thus forcing a redraw of the groupings.

National coach Tai Beng Hai said that they’ll try to fix a friendly with one of the teams from Group B.

“We’ll leave on Tuesday. Hopefully, we can play a friendly against one of the teams before the tournament starts,” said Beng Hai.

“Nothing is confirmed yet. We had initially planned to play against Singapore. But they are now in the same group as us.”

Malaysia will open their campaign on Jan 17 against Ukraine, followed by Oman on Jan 19 and Singapore the next day.

The top three teams will make the cut for the World Hockey League Semi-Finals (Round Three), to be held in Belgium and Argentina in June.

The World Hockey League is a qualifier for the Rio de Janerio Olympics in 2016.

LAHORE: Pakistan International Airlines (PIA), National Bank of Pakistan (NBP), Pakistan WAPDA and Pakistan Army moved in the semifinals of the 61st PSO National Hockey Championship at the Sialkot Hockey Stadium in Sialkot on Thursday. PIA will take on NBP in the first semifinal while WAPDA will clash with Army for a place in the final on Saturday (tomorrow) at the same venue.

Earlier in the third quarterfinal, PIA defeated Sui Southern Gas Company (SSGC) 3-1 in a nerve-wrecking penalty shoot-out after drawing 1-1 in the stipulated time. Though SSGC took lead in the 15th minute through Abbas Haider who successfully converted a penalty corner yet they went on the defensive which proved a wrong strategy in the end. The PIA forwards took full advantage of the game plan of their opponents by creating gaps and launched frequent attacks. SSGC, however, successfully maintained their lead amid excellent goalkeeping by former Olympian Salman Akbar who demonstrated his skill and experience to guard the fort. PIA got five penalty corners but failed to convert any. The equalizer came in the 56th minute through Muhammad Zubair.

Army had to work hard to beat Punjab 2-1 in the last quarterfinal. Army exerted pressure on their opponents by converting a penalty corner in the 12th minute through their captain Mohammed Imran. But they went through a troublesome phase to defend their fort which was frequently attacked by the Punjab forwards. Punjab wasted a fair chance in the third quarter. However, in the last quarter, Punjab’s Mohammad Faizan leveled the score through successful conversion of a penalty stroke in the 51st minute. Six minutes later Army scored their second goal through Kashif Ali to reach the semifinal. SIALKOT: Players of Punjab and Army in action during their quarter-final in the National Hockey Championship at the Nawaz Sharif Hockey Stadium on Thursday.—APP

National Bank of Pakistan (NBP) and Wapda had advanced to the last four on Wednesday. PIA will face NBP on Saturday for a place in the final with Wapda and Army clashing in the other semi-final.

PIA advanced after a tense penalty shootout win against Sui Southern Gas Company (SSGC) after they were locked at 1-1 at the end of regulation time.

SSGC took the lead in the 15th minute when Abbas Haider converted a penalty corner and although PIA were wasteful with the five penalty corners they earned, Mohammad Zubair finally cashed in on a short corner in the 56th to take the match to a shootout.

PIA then netted two of their penalties with SSGC failing to convert four of their attempts to seal a 3-1 win.

There was also a late goal in the other quarter-final where Army edged Punjab 2-1 with Kashif Ali scoring three minutes from time after Faizan’s penalty stroke conversion in the 51st had cancelled out Mohammad Imran’s 12th-minute opener for Army.

KARACHI: PIA reached the semi-finals of the 61st PSO National Hockey Championship after defeating SSGC 3-1 in the penalty shootout at the Sialkot Hockey Stadium yesterday.

Muhammad Zubair’s late goal in the 57th minute of the match helped PIA equalise at 1-1, which gave them the opportunity to bounce back and win the game.

SSGC took the lead in the 15th minute through Abbas Haider as he successfully converted a penalty corner.

In the 56th minute, PIA forwards Shafqat Rasool and Muhammad Zubair earned a penalty corner for their team, which Zubair capitalised on.

In the other match of the day, Muhammad Imran and Kashif Ali scored a goal each to guide Army to a 2-1 win over Punjab.

Imran converted a penalty corner in the 12th minute to give his side the lead before Muhammad Faizan equalised in the 51st. However, just six minutes later, Kashif Ali scored the winner to help his team book a place in the last four.

The Pakistan Hockey Federation (PHF) spokesman said that a tough competition would be expected in the both the semifinals to be played tomorrow (Saturday). Earlier, in the third quarterfinal, PIA beat Sui Southern Gas Company (SSGC) 3-1 in a nerve breaking penalty shoots out session after drawing 1-1 in the stipulated time.

Army had to make strenuous work to beat Punjab in the last quarterfinal. They exerted pressure on their opponents converting a penalty corner in the 12th minute through their captain M Imran. In the last quart, Punjab’s Faizan leveled the score through successful conversion of a penalty stroke in the 51st minute. Six minutes later, Army scored their second goal through Kashif Ali to reach the semifinal.

Paragon women and Petrotrin men start as favourites to repeat as champions when the 12th annual invitational tournament hosted by T&T's Ventures Hockey Club continues with the Open and Veterans Division competition from 5 pm today.

Notre Dame and Ventures, the other teams in the women’s draw meet from 8.20 pm in their curtain raiser.