All the news for Saturday 9 January 2021

Goodbye to an international star 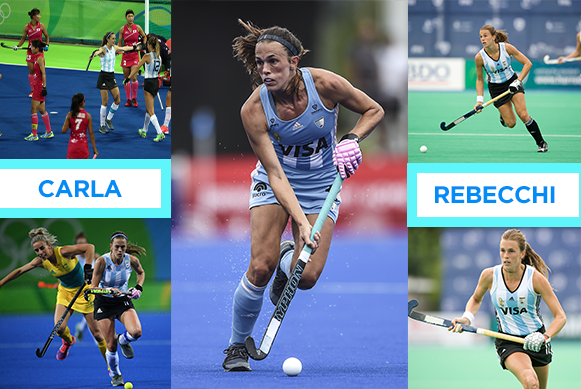 Carla Rebecchi made her international senior debut in 2004 at the Champions Trophy in Rosario. She sat out the first two games of that competition and then came on for the third round robin match against Australia, which Argentina won 5-1. Although Rebecchi didn’t score on that occasion, that was the pivotal moment, when the forward became a permanent fixture in the Las Leonas squad.

The next year, at the Junior World Cup, it was Rebecchi who popped up to score the winning goal in the 70th minute to secure her team a fifth place finish, beating Spain 2-1.

However, while Rebecchi was a regular on the team sheet in those early years – playing in the 2006 World Cup and the 2008 Beijing Olympic Games – it was the 2010 World Cup in Rosario that first saw her begin to shine. Across the tournament, Noel Barrionuevo slotted home six penalty corners and Luciana Aymar mesmerised the oppositions’ defences to score five goals, but it was Rebecchi who popped up to score two of Argentina’s three goals as they beat the Netherlands 3-1 to secure the World Cup in front of adoring home fans. Rebecchi habia llegado.

At the London 2012 Olympic Games, Rebecchi was Argentina’s top scorer as they took the silver medal. Her four goals included the goal that defeated host nation Great Britain in the semi-finals, as well as a brace scored against New Zealand in the pool rounds.

The following years saw Rebecchi crowned leading goalscorer at tournament after tournament as she used her speed, agility and vision to find space and scoring opportunities. In all, she scored 168 goals over her 317 games in a Las Leonas kit.

A spell as captain in 2015 saw Rebecchi increase her influence within Las Leonas squad and it is one of the more recent recruits to the famous blue and white team, Agustina Gorzelany, who vocalises how much Rebecchi has inspired a generation of hockey players.

“Carla Rebecchi, an example of perseverance, attitude, humility. An amazing player that throughout the years has been capable of showing that we, athletes, are made by our own strength, and by believing in ourselves.

“Each year that passed, Carla gave us an spectacular show of what being a professional player was like. Not only because of her great game play but also from what she spread from being so tenacious and decisive. The perfect representation of someone who will never to give up!”

But all stellar careers have to come to an end, although Rebecchi did take two attempts before she was finally able to break the Las Leonas bond. In February 2017, she announced her retirement and seven months later Vera was born to Rebecchi and her husband (and former Argentina hockey player) Jorge Lombi. A few months later and Rebecchi was unable to resist the lure of another Olympic Games and so returned to the international scene for one last shot at gold.

In her first game back – a FIH Pro League match against Belgium – Rebecchi stole the show with a performance that won her the Player of the Match award. In the season that followed, the forward twisted, turned and tormented her way past defenders in a manner that suggested she was getting even better than before her retirement.

A nomination for the FIH Player of the Year was a fitting reward but shortly afterwards, Rebecchi made an announcement that was to break the hearts of Las Leonas fans. The postponement of the Tokyo 2020 Olympic Games until 2021 was a commitment too far for the player and her family.

Explaining her decision to the Argentinian media, Rebecchi said: “Jorge (Lombi) took over looking after Vera, but the matches in New Zealand and Europe, as part of the Pro League, were difficult for me as a mother.

“Tokyo was a target. My dream was to win a gold medal, but that won’t happen now,” she said with touching poignancy. “I don’t know what will be my destiny now, but I do want to be a mother again.”

Rebecchi might not have finished her career with the Olympic gold medal she sought but she has left a treasure trove of memories in the form of match-winning performances and goal-scoring moments of which hockey mortals can only dream.

The Indian team, which last played against Australia and New Zealand in a tournament in December 2019, will take on junior Chile team on January 17 and 18.

Hockey India on Friday named a 24-member junior women's squad, which will be led by defender Suman Devi Thoudam, while Ishika Chaudhary will serve as the vice-captain. - TWITTER

The Indian junior women's hockey team will resume competition after more than a year following the coronavirus-induced break when it tours Chile for six matches later this month.

The Indian team, which last played against Australia and New Zealand in a three Nations tournament in December 2019, will take on junior Chile team on January 17 and 18.

"The junior women's team has worked very hard since returning to the National Coaching Camp in October and it will be great to see the players execute their skills in a match environment in Chile," Indian junior women's hockey team coach Erik Wonink said in a release.

Hockey India on Friday named a 24-member junior women's squad, which will be led by defender Suman Devi Thoudam, while Ishika Chaudhary will serve as the vice-captain.

The tour will serve as a much-needed preparations for the Indian team for the all-important Junior World Cup this year.

"We are absolutely ecstatic about touring Chile as it's been a while since we got some match practice due to the coronavirus pandemic, so this will be a good outing especially as it's coming at an apt time," Thoudam said.

"It's been very difficult to stay away from tournaments and the tour of Chile has come at the right time. We have practiced well in the last few months and the games against Chile will help us prepare for the Junior Asia Cup which will be held in April 2021." The junior colts had a fair outing in Australia when they last travelled for an international assignment, winning two matches, drawing one and losing one.

Hockey India and the Chilean Field Hockey Federation will be creating a bio bubble for all the personnel involved in the tour.

"The entire Indian squad (players & support staff) will be tested twice (once within 72 hours of departure from India & once at arrival in Chile) before the Indian team starts training in Chile," HI said.

"An affidavit along with the negative PCR test result of each individual travelling squad member has to be submitted at entry in Chile." The governing body said "at all times the Indian team has to stick to a strict health bubble and move uniquely and exclusively from the hotel to the pitch and from pitch to the hotel.

"There will be no movement of members out of the hotel except for training and match days." KUALA LUMPUR: The Malaysian Hockey Confederation (MHC) has decided to postpone the 2021 Malaysian Hockey League (MHL) and an official announcement is expected in the next one or two days, according to an MHC source.

MHC had planned to kick start the season with the domestic league, scheduling the men's category from Jan 14 till Feb 20 and the women's league from Jan 20 to Feb 20 at the National Hockey Stadium in Bukit Jalil.

However, it is learnt that the decision to postpone the leagues was made due to the latest surge in the Covid-19 cases the country, which hit a new daily record of 3,027 cases yesterday.

According to the source, MHC has also called off the team managers, technical officials and umpires meetings scheduled in the next few days.

MHC Competitions Committee chairman Datuk Seri Anil Jeet Singh when contacted was only willing to say that a press conference is expected to be held at the MHC office within the next one or two days.

Due to the Covid-19 threat, the Malaysian hockey governing body had already decided to hold the tournaments without spectators, set strict standard operating procedures (SOP) and shorten them by changing the leagues to one-round affairs, compared to the two-round league formats in the previous seasons.

Great Britain and England Hockey were saddened to hear of the passing of hockey stalwart and former Olympian John Land.

He passed away peacefully aged 82 following an illness, with his wife Julie holding his hand.

The North Hockey Association described him as 'one of life’s gentlemen,  a gifted player with a keen will to win and will be missed by all who knew him.'

Known as an exceptional athlete and with great pace, John played for England and GB in the 1960s,

He also rediscovered hockey later in life and played for England at Masters level, winning gold medals at O60, O65 and O70 levels. He also played in the first ever team international O75 against Holland in 2015.

John did a lot of work for hockey over many years, and was instrumental in creating the opportunity and promoting O60s hockey in the North. His work means the North now run sides at O60, O65 and O70 level in the regional tournaments (having won gold at O65 and O70 level). He was the first north regional representative for the England LX club bringing many North players into international grand masters hockey.

He was President of the North Hockey association in 2006 and helped develop the organisation for all levels of hockey in the North.

He leaves his wife Julie, sons Keith and Nigel, daughter Sheena, their partners and six grandchildren and our condolences and best wishes go to them.

Pioneering goal manufacturer Ron Harrod passes away at age of 89

England Hockey were saddened to learn of the death at the age of 89 of Ron Harrod, founder of Harrod UK; who helped pioneer hockey goals as we know them today.

Ron started the company in Lowestoft in the mid-1950s, converting old herring nets into garden netting, using skills traditionally associated with the town’s fishing industry. He expanded to the production of goal nets and then wider sports equipment, and Harrod are now the leading manufacturer of sports goals in the UK. Their hockey goals and equipment were used at both the 2012 and 2016 Olympics as well at the 2018 Vitality Hockey Women's World Cup and they are recognised and market leaders worldwide in ours and a number of other sports.

Hockey’s relationship with Harrod goes back over 40 years and they were the first sponsors of the newly formed England Hockey in 2002. Ron Harrod always showed a great interest in sports governing bodies and this unique relationship has been carried on by his colleagues over the years.

Ron built a company on traditional values, looking after staff and customers alike, coupled with high standards and innovation. His legacy will live on as the company continues to thrive and through the Ron Harrod Foundation set up in 2018 to provide funding for local under-25s sportsmen and women to help them continue to compete in their chosen sport.

We are proud to work with Harrod and we send our condolences to Ron’s family, friends and colleagues at this difficult time.