USA Fights Back From Game Long Deficit to Tie Mexico

SALAMANCA, Mexico –  Following two major victories to open up the Hockey Series Open, The U.S. Men’s National Team went head-to-head against FIH Hero World Ranked No. 39 Mexico. The darkened overcast evening set the tone early as the top two teams in the tournament thus far exchanged possessions and goals as quick as the ticking clock. Despite a hard fought contest, USA was forced to battle from behind early and could never fully recover until late in the game when they scored two unanswered goals to tie the host nation 5-5 at the Cancha de Hockey Siglo XXI in Salamanca, Guanajuato, Mexico.

“What happened was Mexico played a fantastic game, especially in the attacking 25 and defensive 25 yard line,” said Rutger Wiese, U.S. Men’s National Team Head Coach after the game. “They were ahead of us the entire game and scored a few really nice goals, so congratulations to them.”

USA once again emphasized clean set ups and unforced errors as just a few team goals for Saturday’s matchup. Among the most important was snuffing out the momentum of the host nation early and often. The beginning of the match saw the red, white and blue nearly made that a reality when the first penalty corner of the match was awarded to them in the 5th minute. While the first attempt was mishandled, USA nearly capitalized on a second attempt when Mohan Gandhi (Ventura, Calif.) hit the post on his shot. Still dominating ball control in the opening quarter, USA nearly got on the board again in the 9th minute when Alex Grassi (Brookeville, Md.) connected with Christian De Angelis (Doylestown, Pa.) but the ensuing shot was blocked by Mexico goalkeeper Jose Hernandez. Back the other way, Mexico pressed hard along the far side as Francisco Aguilar entered the circle, beating a falling Adam Miller (Panama City, Fla.) to shoot and score the field goal try for the 1-0 score. With the home crowd warmed up, Mexico kept the pressure towards the end of the first quarter, when their first penalty corner of the game was successfully converted to make it 2-0. Up against the clock USA quickly countered downfield after the reset. On the near sideline Tom Barratt (Greensboro, N.C) fed a long sweep to Deegan Huisman (Almere, The Netherlands) who penetrated the circle and delivered a field goal strike to make it 2-1 in the 15th minute.

USA tried to keep the late momentum flowing as the second quarter got underway. While they had several chances inside past the center line, USA struggled to find each other on passes. Another penalty corner chance in the 20th minute gave USA a chance to tie, but Hernandez answered once again to keep the ball out of the net. Moments later, Mexico capitalized on a broken down play by USA deep in their own end. The ball took an awkward bounce at the feet of Gandhi, where a waiting Aguilar was able to take control, shoot and score to extend Mexico’s lead to 3-1 in the 21st minute. With the deficit back to two goals, USA responded swiftly once again on another penalty corner try. This time, the team’s efforts proved fruitful when Grassi tipped in a settled down a mishandled trap by Johnny Orozco (Ventura, Calif.), bringing the score to 3-2 at the half.

Mexico came out of the break however with another scoring opportunity in the 33rd minute. Luis Villages was able to just get ahead of a defending Aki Kaeppeler (Stuttgart, Germany) in front of the net to tip in their fourth goal of the contest. Finding themselves in familiar territory, USA responded on their next penalty corner which was perfectly timed by JaJa Kentwell (Spring City, Pa.) to pull the squad back to within one. Seconds after the reset however, Mexico would jump right back to a comfortable lead when Aguilar was left unchallenged in front of goalkeeper Jonathan Klages (Berlin, Germany) for the field goal. With the score now 5-3, Ajai Dhadwal (Agoura Hills, Calif.) made it a one point game once again after beating his defender and getting the shot off just as he entered the circle to bring the score to 5-4 in favor of Mexico in the 39th minute. William Holt (Camarillo, Calif.) would follow up on USA’s next penalty corner to tie the game in the 40th minute. Immediately following the goal, Huisman was given a yellow card for sliding into goalkeeper Hernandez, sending USA down a player for the remainder of the quarter.

The final frame tested both teams as rain began to drench the pitch. After swapping control of the ball and each team having a scoring opportunity, Villegas was given a yellow card in the 53rd minute to give USA the man advantage for a large portion of the remainder of the game. Mexico’s defense stood strong in the middle however to keep the score at a 5-5 tie at the final horn.

Wiese was quick to comment after the game that allowing a goal seconds after their own was inexcusable as he shifted towards the team’s plan heading into their final match.

“I was not surprised about Mexico,” Wiese added. “Certain areas we didn’t execute. If you don’t execute, I don’t care who you’re playing, you paid a price. We’re going to review a few things and get ready for tomorrow because we can still win the tournament.”

The U.S. Men’s National Team wraps up their round robin tournament against No. 73 Panama on Sunday, June 10. Game time is slated for 4:00 p.m. ET. 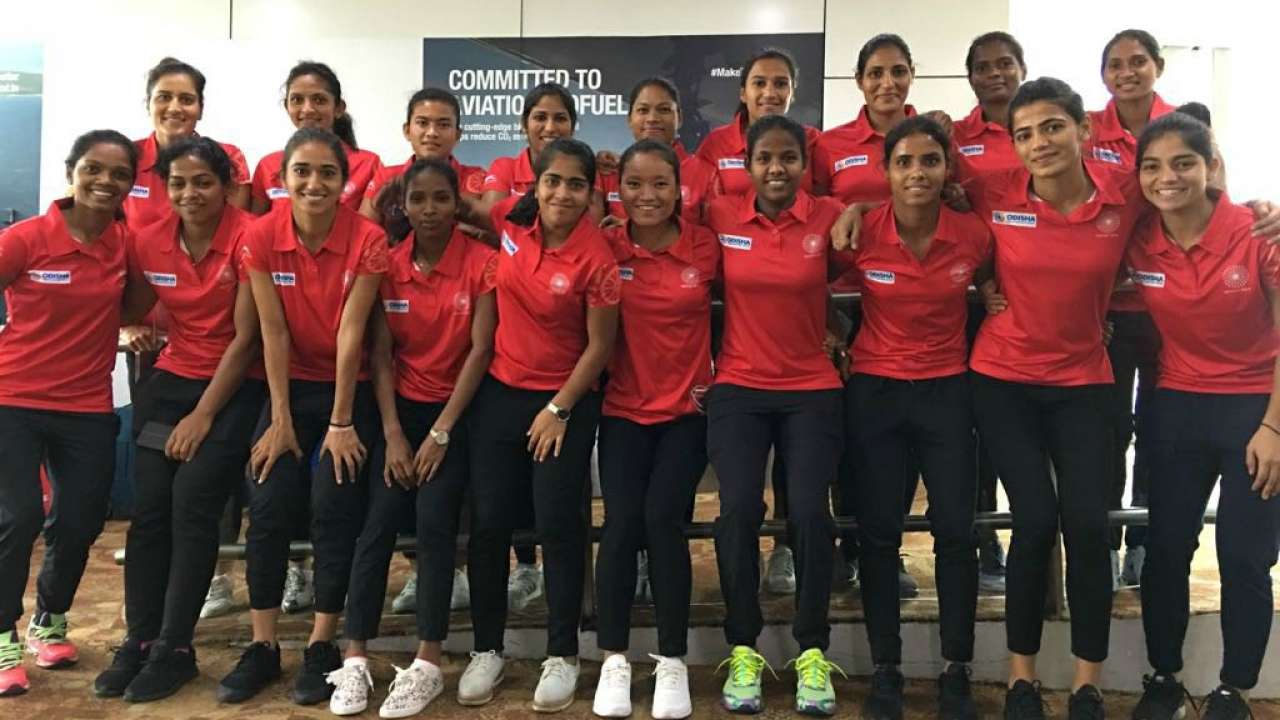 The Indian women's hockey team ahead of their departure for the Spain tour on Saturday , Twitter (@TheHockeyIndia)

Indian skipper Rani Rampal feels the Spain tour will provide a good platform for youngsters to make the cut for the Hockey Women's World Cup squad and give the team a last chance to implement new changes in its game.

A 20-member Indian team left for the Spain tour on Saturday from the Indira Gandhi International Airport in New Delhi. The team led by Rani will play five matches against the home team Spain starting June 12 in Madrid as part of their preparations for the World Cup in London next month.

"The youngsters did really well in the Asian Champions Trophy and in Spain matches if they can have a consistent performance then they stand a good chance to draw the national selectors attention ahead of the much-important Women's World Cup London 2018 next month," said Rani.

With two major tournaments including the World Cup in July and the Asian Games in August, Rani said, the Spain Tour will be their last chance to implement new changes in their game. "We will be playing the World Cup after a gap of eight years. It will be a big stage for everyone in the team and it will be a first-time experience for many," Rani said.

"We obviously won't be going there as the underdog team especially after a good show in the CWG. But the way we play in London will certainly have an impact on our performance at the Asian Games. Good wins with an improved goal scoring rate in London will provide the right build up for the Asian Games and the Spain Tour will be our last best chance to experiment too," she added.

Rani, who is back in the squad after being rested for the recently-held 5th Women's Asian Champions Trophy in Korea, insisted that travelling with a 20-member squad will also ensure that the players are fresh for the tournament next month where they will begin their campaign against hosts and Olympic Champions England.

"It is very important to stay fresh ahead of the Vitality Hockey Women's World Cup London 2018. With a 20-member squad, Chief Coach will have the option of rotating the players often," she said. "This tour in Spain will help us work on the areas that we lacked during the Asian Champions Trophy. I personally felt that we played an attacking game, and kept the momentum up throughout the event but in the final we missed a lot of scoring opportunities and could not defend well enough against Korea's high ball/ scoops," she added.

KUALA LUMPUR: Australia will return to defend their title in the six-nation Sultan of Johor Cup at the Taman Daya Hockey Stadium from Oct 6-13.

The other teams for the Under-21 hockey tournament are Great Britain, Japan, India, New Zealand and Malaysia.

“The week long tournament will feature some of the rising stars in world hockey and we hope fans from Johor and surrounding states will attend the matches,” said Manjit, who is also the organising secretary.

The Malaysian team is coached by former international Nor Saiful Zaini and they will begin their preparations by competing in the six-nation tournament in Belgium in Antwerp from July 14-21.

Manjit said they would organise many other activities in conjunction with the tournament such as seminars, courses and coaching clinics.

“We are hopeful that sponsors will assist us in funding the tournament. We also seek support from the state government and its agencies,” said Manjit.

ISLAMABAD: The federal government has released a special grant of Rs5.3 million for the national hockey team and coaches for remaining unbeaten in the Commonwealth Games staged in Gold Coast, Australia earlier this year.

At the Commonwealth Games in April this year, though Pakistan’s hockey team failed to produce any top-class performance, they didn’t face defeat in any match drawing four pool matches before beating Canada to bag seventh place in the 10-nation hockey contest.

While hailing the government’s decision of releasing the grant, Shahbaz said the money would be distributed among players and coaches.

When contacted, a Pakistan Sports Board spokesman confirmed Saturday the PSB had received Rs5.3 million for hockey.

“On Monday, we will hand over the amount through cheque to the PHF,” he said.