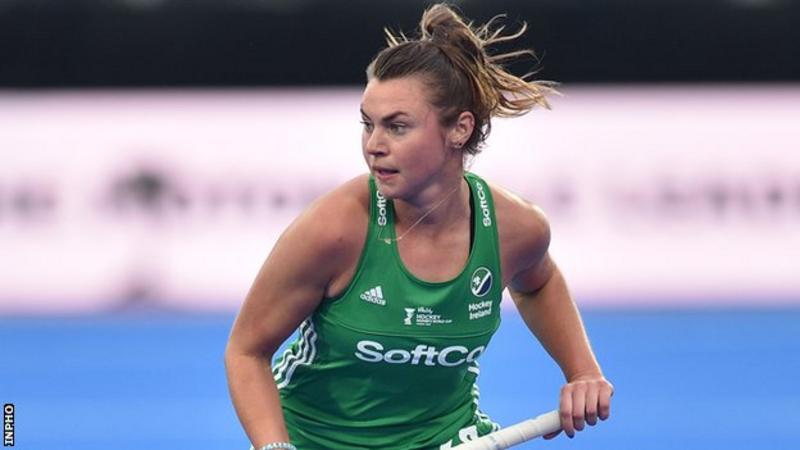 Deirdre Duke hit two of Ireland's goals in Sunday's 4-1 win over Spain in Murcia. Deirdre Duke and her Ireland team-mates will be involved in four further games against Spain over the next week

Deirdre Duke was on target twice as Ireland earned a 4-1 victory over Spain in the opening game of a five-match series in Murcia.

Covid-19 meant the 2018 World Cup silver medallists have not played any games since last January.

The sides will meet again on Tuesday, Wednesday, Friday and Sunday.

Spain are seventh in the world rankings - one place ahead of Ireland.

Last month, Ireland coach Sean Dancer announced a panel of 23 players from which the 16-strong Olympic squad will be selected later in the year.

Ards' uncapped Zara Malseed and Beth Barr, who was part of the squad that dramatically beat Canada in November 2019 to clinch qualification for the Games in Tokyo, were also included.

It is a huge year for the Irish women who, before the Olympics, have the European Championships in Amsterdam in June.

That competition now doubles up as the only qualification event for the 2022 World Cup, which will be hosted jointly by the Netherlands and Spain, with the top six countries from the continental championship qualifying for the World Cup.

Dancer and Green Army raring to go after lengthy hiatus

“It’s not something I want to ever experience again,” Dancer told the Hook. “Obviously, it's not just about the hockey side of things. It's just about everybody's life and situation."

Sean Dancer says he and his panel are raring to go as the Irish women’s team kick-start Olympic year in Murcia this week with a five-game uncapped following a terrible 2021.

The side face Spain each time – no live stream available for the time being – with the coach delighted to put 2020 deep into the rear-view mirror.

“It’s not something I want to ever experience again,” Dancer told the Hook this week. “It was a terrible year. Obviously, it’s not just about the hockey side of things. It’s just about everybody’s life and situation.

“Touch wood, everybody within our environment got through it okay which is the most important thing. And then after that, you think about hockey.

“There is certainly not a lot to reflect on positively from the year. The only thing that you can probably really reflect that we did well is we had a bit more time do was understand ourselves. It also allowed us to spend a bit more time working on some specifics for each individual.”

For the coach himself, travel restrictions were particularly rough. He spent a total of 42 days in isolation as he had to attend to personal issues in both Australia and New Zealand before returning to Ireland without his family as originally planned.

“14 days in Sydney, 14 days in Auckland. And when I got back to Ireland, I had the 14 days here. I spent six weeks of the year locked up in a room; certainly not an experience I want to do again. I am lucky to get through it and happy everyone in our group is safe and secure.”

He jokes that he passed the time watching Derry Girls on Netflix, partially to help understand Megan Frazer’s accent a little better, partially to get some of the team’s jokes.

But, while it did give plenty of time to pore over coaching elements, he says solitary confinement was something “he did not enjoy one bit and didn’t get a lot out of”.

“From August onwards was difficult without that personal support network with family on the other side the world, and not be able to really connect.

“It took a big strain on me personally. Probably what helped me get through was the support of the [Irish] squad. The motivation that I got when I turned up to training to see people that wanted to be there. It certainly helped me and it made it worthwhile for the last four months.”

As such, he is relishing getting back into action for a loaded year with June’s European Championships now doubling up as currently the sole scheduled 2022 World Cup qualifier – a top six finished required – before Tokyo comes into view in July. As such, the Spanish series a welcome one.

“The reality is we haven’t played an international game since January [last year]. We need the games now; we can train all we want, but progress will be when we are tested against good opposition and Spain are very good.

“Facing the Under-19 boys and senior men [in challenge matches] are a great way for us to push ourselves and practice a few things but it doesn’t replace the competition that you’re going to get from a European and world bronze medalist.”

In the travelling party, Niamh Carey was a late addition to the 23-player panel named in December for the 2021 campaign. The current plan is to relocate to Belfast for part of February to use the heat chamber to boost the ability to acclimitise to Tokyo conditions which is set to be the hottest Olympics on record.

Then, restrictions permitting, there is a potential trip to Japan and the Olympic venue in March, though a recent ramp up in cases in Tokyo could put paid to that.

Carey joins her twin Michelle on this trip and is among six development panel players in addition to the carded squad and will be part of the wider panel throughout the year. The others are: Sophia Cole, Ellie McLoughlin, Caoimhe Perdue, Sarah Macauley and Ellen Curran.

On the flip side, World Cup silver medalists Gillian Pinder, Ali Meeke and Emily Beatty have taken a step back for the time-being.

“We had some very good conversations, honest conversations about where they are in their lives and how things are playing out with the team,” Dancer said of the trio.

“In the end, they made the decision to concentrate on the work side of things. The door is always open but, with their experience, they are hard players to replace.”

The short turnaround between the Euros and the Olympics means it is a tough-task to manage the panel with little room for experimentation which might have happened with a different order of competitions and the added importance of the Euros.

“In essence, we have to be 100% ready now for euros. Previously, we had a second bite at the cherry of the World Cup if we weren’t 100% on our task. Now we have to make sure we’re ready, which means instead of having a timeline for the start of July, we need to have a timeline for June.

“The Euro squad will ideally be pretty much the same team as the Olympics. That’s probably the reality of where we sit but injuries will probably be a concern in that period so we do need to have enough flexibility to cover a few of those things.” 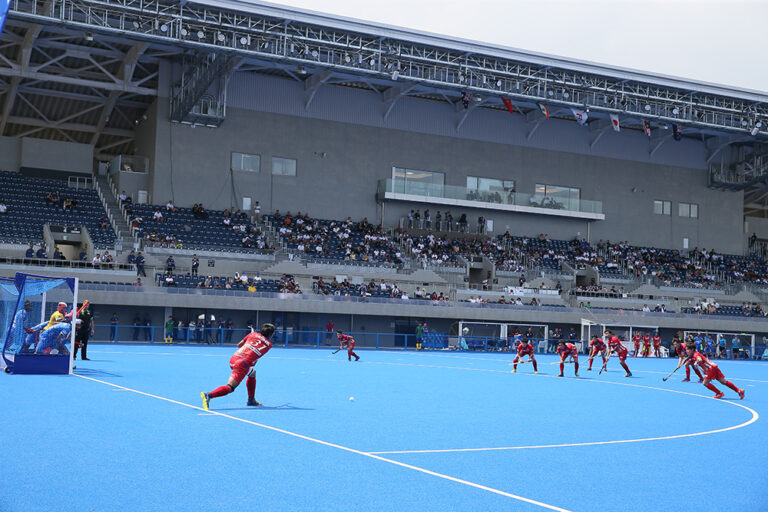 An opinion poll over the weekend in Japan has revealed that around 80 per cent of the public believe that Tokyo 2020 should be cancelled or rescheduled.

The pandemic has cast a further shadow over the staging of the Games with Tokyo suffering a recent surge in infections.

In the poll conducted by Kyodo News, 35.3 per cent called for Olympic cancellation, while 44.8 per cent said the Games should be put back for a second time.

Asked for a reason as to prime minister Yoshihide Suga’s slide in approval ratings, down nine per cent to around 41 per cent, the survey revealed a lack of leadership as the main reason.

Last week, long-serving International Olympic Committee member Dick Pound suggested that the rejigged Games could be in doubt once more.

“I can’t be certain because the ongoing elephant in the room would be the surges in the virus,” he told the BBC.

His comments came after the IOC’s bullish stance that the Games would go ahead as planned this summer.

Game over for MHL 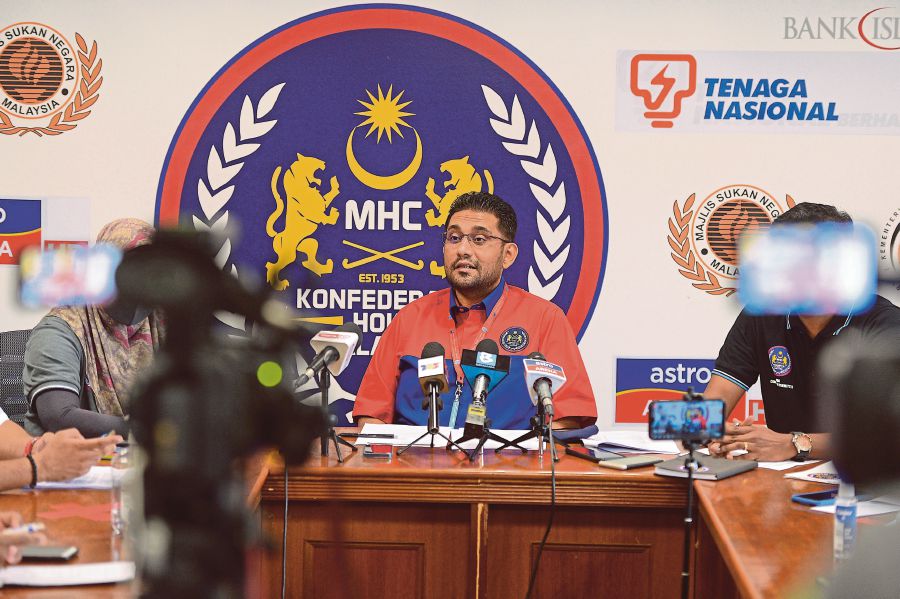 Both the men and women's Sabah teams bound for the Malaysia Hockey League (MHL) returned to their home state yesterday, signalling that the tournament has lost its battle against Covid-19.

Prime Minister Tan Sri Muhyiddin Yassin will make an announcement today on the possibility of reintroducing the Movement Control Order in selected states in the country.

The MHC are expected to announce the postponement of the MHL, scheduled on Jan 14-Feb 20, tomorrow.

On Saturday, Anil said the MHC competitions committee, in an online meeting, had unanimously agreed to support any decision taken by him.

And yesterday, the Sabah players, who had arrived in Kuala Lumpur on Jan 5 to prepare for the MHL, returned home.

The MHC may have realised that it would be too risky to carry on with the MHL with some teams facing problems in forming full squads due to the Covid-19 situation.

The Education Ministry has yet to give the green light to students to play sports.

Gold medalist Owsley set for move to HDM next season

HDM have secured the marquee signing of Olympic gold medalist Lily Owsley in an eye-catching addition for the 2021-22 Hoofdklasse season.

Capped 155 times for England and Great Britain, the forward brings a forceful presence to the Hague-based club which coach Ivar Knötschke will help propel the club toward the top four.

“With Lily’s arrival of Lily, we are taking the necessary steps to quickly develop and grow our team and make a serious attempt to compete with the top sides.”

She will follow in the footsteps of the likes of Erica Sanders and USA captain Ashley Hofman to link up with the club.

HDM were one of the stories of the early stages of the Dutch season with six wins out of seven before the competition came to a halt. It left them in third place, only behind Den Bosch and AH&BC Amsterdam. 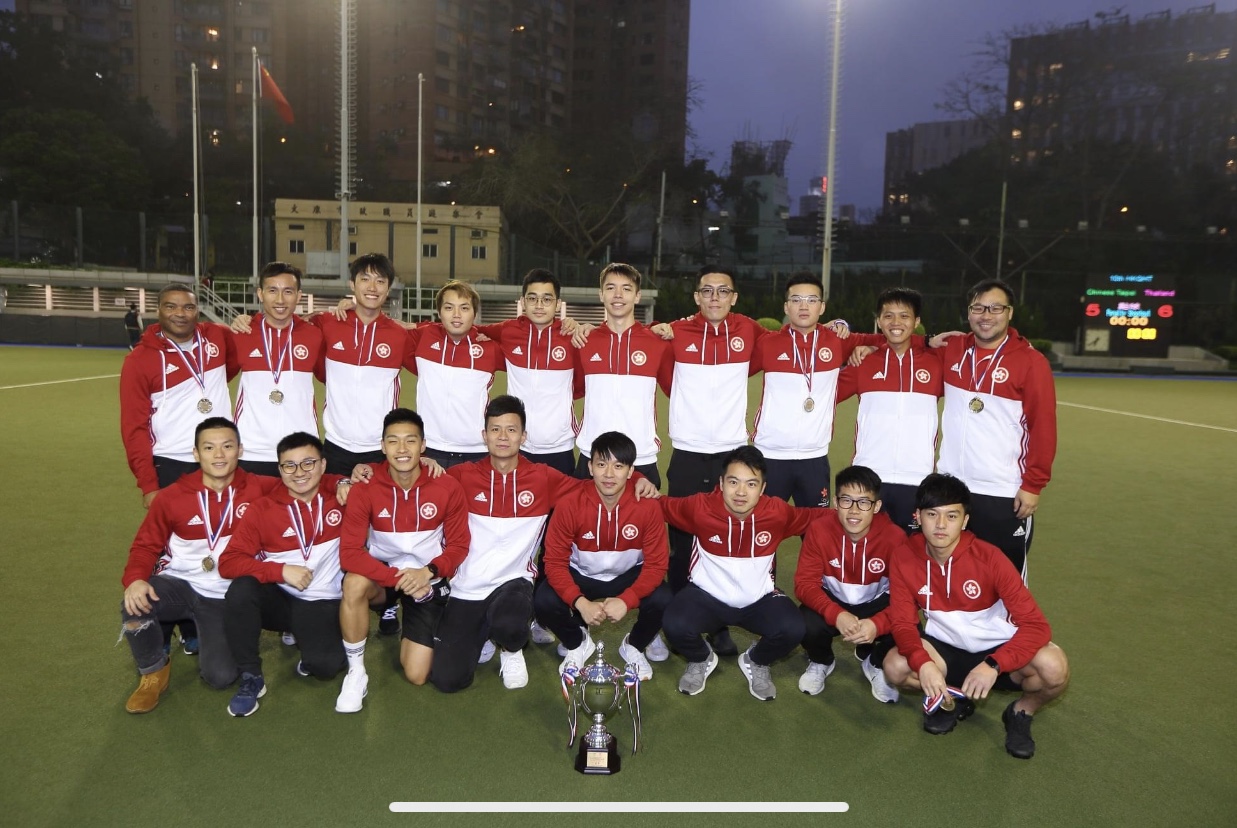 The Hong Kong Hockey Association is deeply saddened by the sudden passing of Mr Fabian Gregory, Head Coach of the Men's National Squad on Saturday. Fabian led the national squad since 2017 and made invaluable contribution to its high performance programme. He was well respected both on and off the field as well as by many around the world. He will be dearly missed by all of us. The Association would like to extend our deepest condolences to Fabian's family and friends.